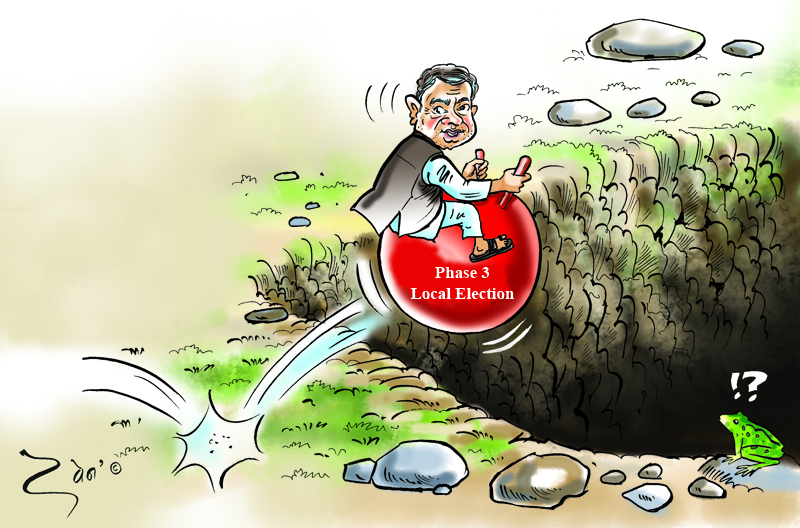 There is a chance most Madhesi parties will go out of business, which could help Madhesi public unite behind a common cause.

Madhesi parties and their leaders have, in a way, orphaned the Madhesi people with their divisive politics and never-ending internal feuds that have prevented Madhesis from uniting against the government’s discriminatory policies. This has also kept Madhesis from negotiating as one single group with Kathmandu for equal citizenship rights on par with other ethnic groups, which they would do in exchange for a loyalty oath and/or other required changes Madhesis must make—in social and cultural practices, for example—for them to be accepted as trusted citizens of the State.

There is now a chance that most or all Madhesi parties will go out of business, which will likely pave the way for Madhesi public to unite for a common cause. The reason for such optimism is the gradual erosion of Madhesi parties’ public support—in Madhes as well as nationally. In the second Constituent Assembly (CA) election in 2013, for example, Madhesi parties, in total, received 11 percent of Proportional Representation (PR) votes and about a fifth of total votes cast in the Madhes region. Had the proposed three percent PR vote threshold been effective during the second CA election none of the Madhesi parties would have been in existence.

Looking at the outcomes of the two phases of local-level elections, which has been held in six out of seven provinces, Madhesis parties—and ethnic parties in general—have suffered a near wipe-out. Many of them not only failed to win seats but also lost their security deposits.

Likewise, the rebellious groups in the Eastern Hills “who chant slogans of ethnicity most of the times, like the Sanghiyata Limbuwan Munch, Khambuwan Rastriya Morcha, and Rastriya Janamukti Party, not only lost elections but lost embarrassingly as they could not even claim back their election deposits,” says one field survey report from the region. The report adds that “at the most, their victories were limited to winning wards and failed to make any impact by securing positions of chiefs and deputy chiefs [in Municipal and sub-municipal councils].”

Now all sights are on election in Province 2 comprising eight heavily populated Madhesi districts of Eastern and Mid-Tarai: Saptari, Siraha, Dhanusa, Mahottari, Sarlahi, Rautahat, Parsa and Bara. Local elections had to be delayed nationwide because of threats of boycott from Madhesi parties, unless the constitution was first amended. But, with the agreement of some Madhesi parties, election has already been held in six provinces, which leaves Province 2 as the only outlier. In this province local election is now scheduled for September 18.

The six parties that came under the umbrella of Rastriya Janata Party Nepal (RJPN) are all primarily based in Province 2. After much thinking and soul-searching and under pressure of the Indian Embassy, the new party could very well take part in the third phase.

But election in Province 2 may prove fatal for the newly established RJPN, which faces the prospect of humiliation even in their stronghold: all six members of the RJPN presidium come from this province. This means that RJPN’s poor showing on its own home-base would greatly undermine its credibility and present it with an existential crisis.
With ethnic parties losing heavily in the first two phases of local elections, the prospect of Madhesi parties securing a respectable number of wins in the third phase appears slim. They are rather more likely to face embarrassing losses. The RJPN’s outlook is particularly poor, as the party is marred by internal feuds and caste-based candidate selection. This is going to alienate lower-caste and Dalit voters who comprise a huge majority of the electorate and who are keenly aware of the exclusion at the hands of high-caste politicians leading the RJPN.

Besides the unfavorable caste barrier for the RJPN, the national mood has progressively turned towards national parties that also carry the advantage of ideology-based name recognition. With the electoral culture in the country getting more robust, people are now inclined to identify with clearly-defined parties with national reach and historical roots. In this light, only three or four parties, all of them with national following, can now command broad-based public support. The tilt to national parties has lately benefited the CPN-UML, given its rigid stance on constitution amendment and open opposition of India’s trade blockade.

All of these developments point to an uncertain outlook for the RJPN ahead of Phase 3 election, while the same is also true of other two main Madhesi parties led by Upendra Yadav and Bijay Gachhadar—the Madhesi People’s Rights Forum, Nepal (MPRF-N), and the Madhesi People’s Rights Forum, Democratic (MPRF-D), respectively. MPRF-N has re-named itself as Federal Socialist Forum Nepal (FSF-N), which omits ‘Madhes’ from its name in order to present itself as a national party. The results from Phase 1 and Phase 2 elections, however, hint at rejection of FSF-N in all hill districts and only a miniscule of support in Madhesi districts, which in turn largely undermines its claim of being a national party.

Gachhadar’s MPRP-D—the largest vote-getter in 2013 among Madhesi parties—also faces poor prospects in Province 2, the main reason being that its electoral base is Sunsari and Eastern Madhes that are outside this province. The party may also face defections to RJPN and to national parties, particularly UML. Also, Gachhadar has no core support in Madhes for his muddled image as an ethnic Tharu. For the same ethnic reason, Province 2 will pose a challenge for Gachhadar.

With so many complexities in Madhesi politics, it is hard to assess the outlook of election in Province 2 but signs are clearly pointing to poor showing of all Madhesi parties, unless they agree on an electoral pact to work together so as not to split Madhesi votes. However, this strategy has not worked in the past and is unlikely to work now.

The author teaches economics at NOVA College, Virginia, US.

KATHMANDU, May 30: The Ministry of Education (MoE) is working to again reschedule the Grade 11 exams. ... Read More...