'Things will get worse': London goes into stricter lockdown 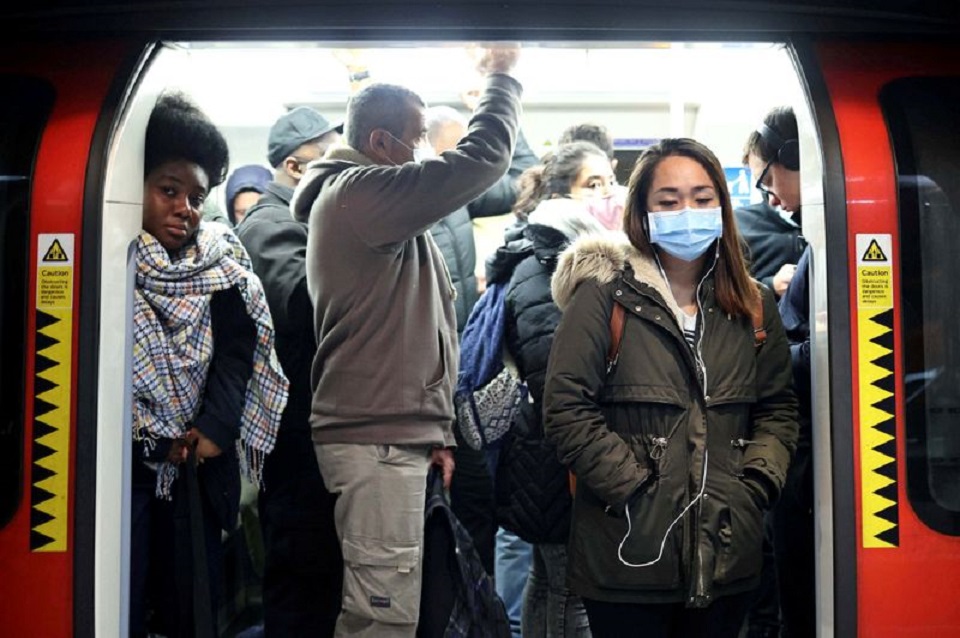 Commuters travel on a Jubilee line tube train during the morning rush hour, amid the outbreak of the coronavirus disease (COVID-19) in London Britain, October 15, 2020. REUTERS/Hannah McKay

The respiratory pandemic, which emerged in China last year and has killed over a million people worldwide, is spreading in most parts of Britain, whose official death toll of 43,155 is the highest in Europe.

Anger, though, is rising over the economic, social and health costs of the biggest curtailment of freedoms since wartime. One former government adviser warned some people would have trouble clothing their children soon.

Health Secretary Matt Hancock said London, which has a population of 9 million, as well as the adjacent, heavily populated county of Essex, would be put on “high” alert level, up from “medium”, at one minute past midnight (2301 GMT Friday).

The main impact of the move to “high” is that people cannot meet other households socially indoors in any setting, for example at home or in a restaurant. Travel should be reduced where possible, Hancock said.

“Things will get worse before they get better,” Hancock said. “But I know that there are brighter skies and calmer seas ahead - that the ingenuity of science will find a way through and until then we must come together.”

Britain’s move to halt socialising in its capital means that London and Paris - Europe’s two richest cities - are shortly to be living under the shadow of state-imposed restrictions as the second wave of the outbreak spreads through Europe.

London, the world’s centre for international banking and foreign exchange trading, is only rivalled by New York when it comes to financial clout. The worst-hit London areas are Richmond, Hackney, the City of London, Ealing, Redbridge and Harrow.

London Mayor Sadiq Khan said: “I must warn Londoners: We’ve got a difficult winter ahead.”

Manchester, in the north of England and one of Britain’s largest cities, had been tipped to be moved to “very high” alert from “high”, but Hancock said talks with local leaders were continuing so no decision had yet been made.

Johnson, who scored a landslide election victory in December, says his government is fighting a war against the virus and that some sacrifices are necessary to save lives.

But opponents say his Conservative government was too slow to act when the virus first struck, failed to protect the elderly in care homes, and bungled the testing system.

In areas put on the high alert level, socialising outside households or support bubbles is not allowed indoors, though work can continue and schools continue to operate.

The “very high” alert level forbids socialising, forces pubs and bars to close and prohibits travel outside the area.

The government’s former homelessness adviser, Louise Casey, said Britain faces a “period of destitution” in which some families “can’t put shoes on” children.

“Are we actually asking people in places like Liverpool to go out and prostitute themselves, so that they could put food on the table?” Casey told the BBC.

Liverpool in England’s northwest is already in the highest-risk tier.

“There’s this sense from Downing Street and from Westminster that people will make do,” Casey added, referring to the national government’s headquarters. “Well, they weren’t coping before COVID.”

BIRATNAGAR, May 6: Six coronavirus patients, who had been undergoing treatment at Biratnagar-based Koshi Hospital, discharged Wednesday morning after they... Read More...

According to UNESCO, globally about 1.6 billion children, which account for 91 percent of all learners, are currently affected by... Read More...