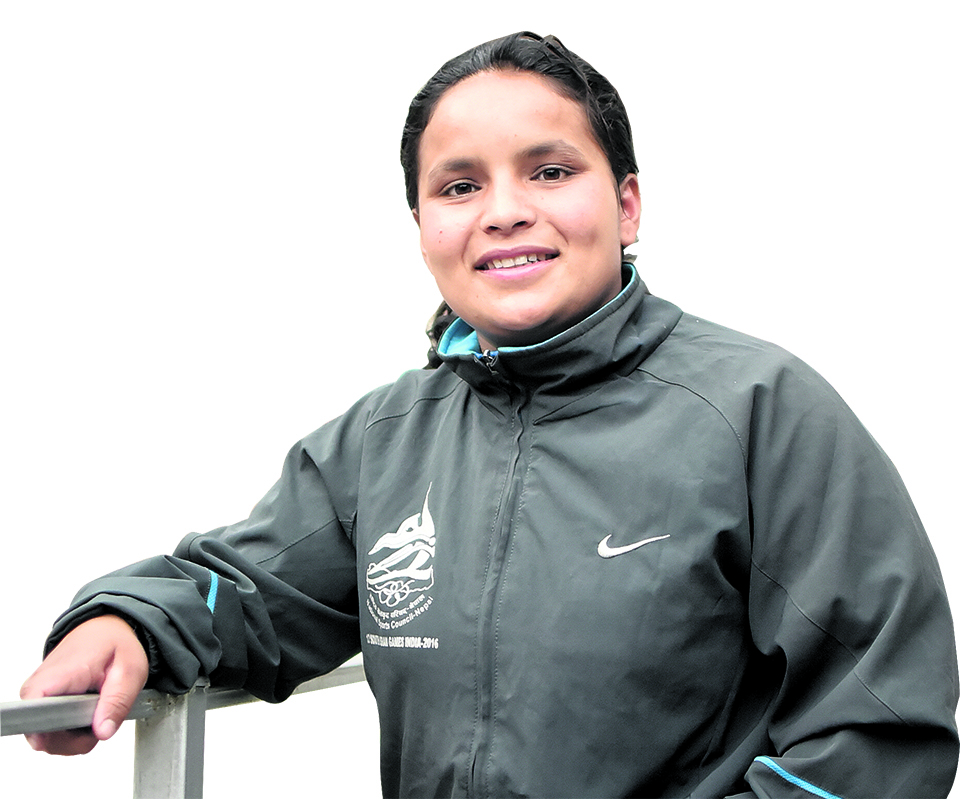 Having grown up as a karateka (karate player), Manisha never imagined she would become a weightlifter. In fact, for the majority of her life she never knew that weightlifting itself was a recognized stream of sports. A third dan black belt in karate, 197 medals in karate and 12 best player awards, Manisha always dreamed of competing at the national level in karate but she was compelled to give up the game before ever qualifying for it.

Manisha grew up as the oldest of three siblings in Boudha, Kathmandu. Like most children, she was playful and forever buzzing with energy. At home, she and her siblings caused havoc with their mischief so her father decided early on that her energy ought to be projected through sports. From the age of six, she started taking karate lessons every morning and never stopped. “I wouldn’t say I was gifted in the sport but I was consistent. I eventually moved up the ranks and began winning competitions. The more I won, the more I loved the sport and so I continued with it,” she says.

The very first time she won a certificate for a karate match her father got her a binder and challenged her to fill the entire binder with more certificates. Today, Manisha has over 20 binders, all filled in with certificates of acknowledgement. However, as she progressed, there were constant issues regarding her weight division. Because her height didn’t measure over five feet, she met one weight division but was always at a disadvantage because of her height.

In karate, the long kicks earn more points than punches. Manisha couldn’t deliver the kicks so she had to rely on her punches. Despite her skills, this put her at a serious disadvantage and she lost one too many matches as she grew older. To add to this, she never qualified for tournaments because of her weight division issue (she weighed enough but stood short).

It was during this period that her coach, Deepak Shrestha, suggested that she try weightlifting. He told her that her build was fit for lifting weights and that she should give it a thought. “I had no clue what weightlifting was. I was already disheartened by what was happening. I couldn’t even spare a thought to changing my sport. I had done karate all my life, how could I give it up?” she recalls. Manisha’s parents, however, were familiar with the sport and encouraged her to give it a shot.
So she trained as a weightlifter for six months and participated in the nationals for weightlifting (55 kg division). She won three gold medals. In karate, there is only one medal to be won but weightlifting, on the other hand, has three. Manisha hit a hat-trick on her very first attempt. “I had nearly forgotten what winning felt like. Weightlifting reminded me of that. I regained my confidence and decided that I would stick to the sport from then on,” she explains.

She’s been a weightlifter for the last five years and has been unbeatable in her division. And she credits her hard work and consistency for it all. Each morning she gets up at six, trains for hours and manages her diet strictly. Although she has given up karate from a professional level she teaches students at schools and at her home studio. For the last two decades Manisha has lived a regimented life and devoted all of her waking hours to her game. “I don’t complain either. This is a life I’ve chosen for myself and my sport is more than worth it,” she says.

Weightlifting has taken her to countries all over the world (Thailand, Poland, Taiwan), helped her reclaim her confidence, and given her respect as well. To add to that, she has great respect for weightlifting and believes that each sportsperson (even a chess player) requires weight training. “Weight training focuses on the balance of the body. It doesn’t focus on just one part of the body but on the body as a whole,” she claims. Manisha recently acquired her diploma from NIS (India) on weight training and plans to become a weight trainer.

In Nepal, weightlifting isn’t a highly recognized sport and although Manisha feels disheartened by this, she understands the reason behind the lack of interest. “Weightlifting equipments are expensive and very few places have the complete equipment. Also there will always be a greater interest for mainstream sports (football and cricket) and most weightlifters are from the Nepal Army, APF and Nepal Police. They train only when they have the time to, so it’s harder for them to remain consistent,” she reasons.

Despite this she believes that a little change in schools’ practices for sports can help change that. She plans to do her bit in encouraging kids by introducing them to light weights and making the sport fun. “They need not take up the sport themselves but weight raining can really help with physical and mental growth,” concludes Manisha.

KATHMANDU, Feb 15: The United Arab Emirates has given a target of 278 runs to Nepal during its final league match... Read More...

NOC estimates its monthly loss at Rs 4.44 billion due to soaring oil prices in int’l market
13 hours ago
Mohan Baidya hospitalized
9 hours ago