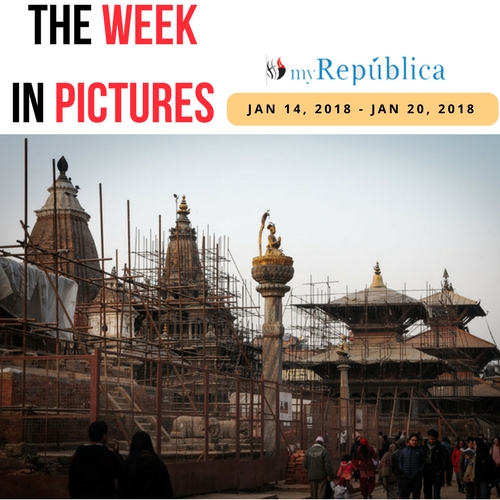 Jan 14: A woman reacts to listening music on headphone at Swayambhu.

Jan 15: A young lady poses for a photograph at Tudikhel during Maghe Sankranti.

Jan 16:  Nurses all over the nation staged protest on Tuesday demanding better pay scales and an end to exploitation of labour. They resorted to protest under the leadership of Nepal Nursing Association putting forth an 11-point demand including unconditional reinstatement of nursing staffers who were sacked from from Human Organ Transplant Centre (HOTC), equal pay scales for nurses working in private hospitals and end of labour exploitation in the name of volunteer service. Nursing Association of Nepal withdrew its protests after signing an eleven-point agreement with the government on January 18.

Jan 17:   The historic Navadurga Naach (Dance), also known as the ‘fish killing festival’, has kicked off in Suryamadhi of Bhaktapur from Monday, the first day of Magh as per the Nepali calendar. The dance will be performed in 21 places including Dattatraya, Kwathandau and Gachen of the Bhaktapur Municipality alone till January 29.

Jan 18:  Tamang people across the country celebrated Sonam Losar—the beginning of the New Year— with zest and zeal on Thursday.Sonam Losar is celebrated on the first day of the new moon during the month of Magh in Bikram Sambat (BS) calendar.

Jan 20:  The Sundhara-tripureshwor road section, which is full of dust since long time has blacktopped on Saturday aftenoon.

In a bid to control dust pollution and traffic congestion in the Capital, the Central Regional Road Directorate (CRRD) under the Department of Roads has decided to blacktop 80-km road sections in the Valley within five months.

KATHMANDU, March 25: The Ram Nawami festival, the birthday of Hindu God Ram, is being celebrated across the country today. Read More...

DAVOS, Jan 22: The global economy and geopolitical tensions are taking a back seat to a more immediate problem at... Read More...

KATHMANDU, Nov 19: Prakash Dahal was taken to the CPN-Maoist office at Paris Dada for his last homage. Various leaders such... Read More...

Three dead, one injured in  Solukhumbu road accident
2 hours ago