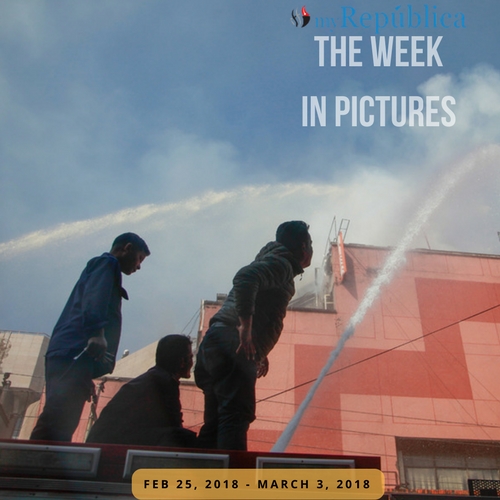 Feb 27: People with banner and candle light stage protest to stop war in Ghouta of Syria. In 12 days of airstrikes, hundreds have been killed, including children. Photo: myrepublica.com

Feb 28: Towards foreign employment: People queue outside the Embassy of the UAE to stamp their police report.  Remittance contributes to 30% of Nepal’s total GDP. Photo: myrepublica.com

March 1: A child paints color to a tourist during Holi in Basantapur Durbar Square. Holi was observed on March 1 and 2. Photo: Dipendra Rokka/Republica/Nagarik.

March 2: Jagat Maya Tamangi, street vendor from Kavre weaves flower garland at Indra chowk.  She has been making a living by selling garlands for the past 40 years.  Photo: Pratik Rayamajhi/ myrepublica.com

March 3: World Record Council, Nepal organized a gathering of more than 75,000 people who came together to hold a new record saying BUDDHA WAS BORN IN NEPAL.” Photo: Dipendra Rokka/ myrepublica.com

KATHMANDU, Jan 24:  If you're planning to visit to Chandragiri, today might just be the day. Westerly wind has brought... Read More...

WHO reviewing report urging new guidance over airborne spread of coronavirus
21 minutes ago
Govt hands over leaking houses to the poor, many did not take it
1 hour ago