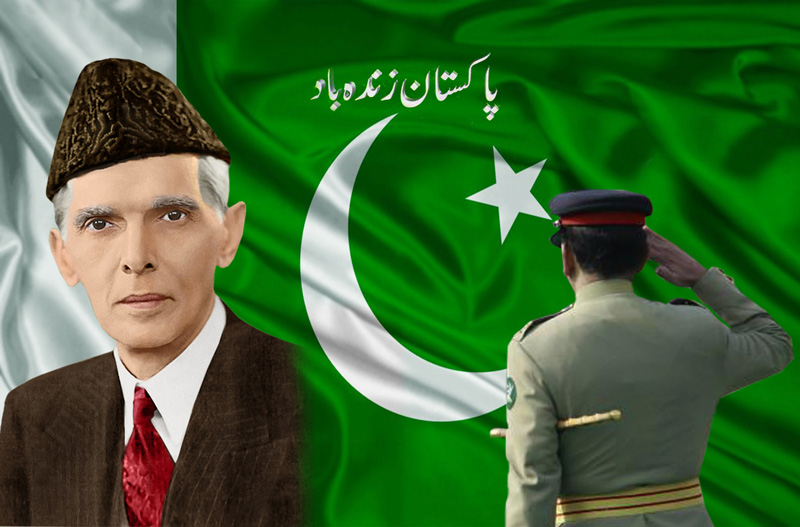 Having fought two great wars in less than half-a-century, the British were an exhausted empire by the mid-1940s. They had already sucked South Asia dry of its exportable resources. The cost of maintaining effective control was increasingly getting to be higher than maintaining law and order.

The army of British India was more Indian than British. The governance of the colony was handled by the celebrated steel frame of the Indian Civil Service (ICS), which had already begun to be ridiculed as ‘neither civil, nor service and though sometimes Indian in body, seldom so in mind and spirit’.

Meanwhile, a strong civil society had already emerged due to unification of the market through the use of a single currency, popularity of English as the medium of education, and wartime expansion of transportation and communication. The middleclass wanted political status commensurate with its accomplishments. Even though in formative stage, a political society was already in place in the form of parties with competitive constituencies.

Frustrated and fatigued due to relentless domestic pressures to wash its hands off a losing enterprise, the British parliament legislated through the Indian Independence Act, 1947: “As from the fifteenth day of August, nineteen hundred and forty seven, two independent Dominions shall be set up in India, to be known respectively as India and Pakistan”.

Two brilliant Gujrati barristers interpreted the Act in completely different ways. The Quaid—the cigar-chomping Western Oriental Gentleman in Saville Row suits, Quaid-i-Azam Muhammad Ali Jinnah—saw an opportunity of finally achieving what had just been an idea. The Bapu—an ascetic Mahatma in crumpled loincloths and wire-rimmed glasses, Mohandas Karamchand Gandhi—sensed the threat of a civilization unraveling through endless conflicts.  As it often happens with any stipulation of law, both interpreters were correct.

Identity crisis
It’s wrong to portray the independence of Bangladesh in 1971 as the breakup of the unity of Pakistan. When Choudhry Rahmat Ali—a Gujjar British barrister from Punjab—formulated the idea of a Muslim homeland in the early 1930s, Bengal was nowhere in it. In his conceptualization, letters in the name of the land of the pure (Pakistan) stood for Punjab, Afghania, Kashmir, Sindh and the ‘stan’ taken from Balochistan with an ‘i’ added in-between for ease of pronunciation.

Even otherwise, the East Pakistan had nothing in common with its western wing except the religion, which also had minor differences in cultural practices. The population was racially apart, linguistic affinity was conspicuous by its absence, and a sea of people separated the two entities. Independence of Bangladesh was a historical inevitability. That the parting of ways took so long to materialize—almost quarter of a century—had more to do with geopolitical compulsions than political realities.

The separation, however, succeeded in raising questions over the very idea of Pakistan—if it was not the religion, what else could be the raison d’être of its continuity? And if indeed it was just the religion, did religious minorities have any future in a country imagined as such? Pakistan offers interesting lessons in the study of contestations over the idea of a nation and its elusive resolution. In essence, every country is permanently a work in progress.

Ideas can lose their validity. Institutions can crumble. Legitimacy of the state may also weaken due to the collapse of the social contract. But a country continues to retain its identity as long as its people don’t give up hope. The celebrated resilience of the people of Pakistan comes from an unwavering faith in the imagination of the nation.

Hard realities, however, have slowly begun to bite as the number of Pakistanis that wants
to opt out of its citizenship is much higher than those that feel proud of flaunting it abroad. Though half in jest, several Pakistanis in western countries assert that the best Pakistani is a lapsed Pakistani. The trajectory appears erringly similar for a much smaller, poorer and weaker ‘Hindu Pakistan’ as it struggles with its own destiny. Perhaps Nepalis need to study Pakistan more carefully to understand their own country better.

Parallel pathways
While India is a civilization trying to become a multi-national state, Pakistan is a political entity still in the process of becoming a country with a distinctive identity. The intelligentsia of saffron India wants to erase—glorious or inglorious is again a matter of interpretation—a large part of its Mughal heritage. It can’t claim any authority over source of its civilization in the Indus Valley but wants to prove that a demolished mosque in Faizabad was once Ayodhya.

Predicaments of Pakistan are no less perplexing. The history that it wants as its own lies at the Red Fort in New Delhi where the Indian tricolour is traditionally unfurled on the Independence Day. The past that it’s reluctant to own up remains abandoned in the ruins of Taxila. The havelis of nobility of Sikh Empire in Punjab or the kothis of Hindu traders in Sindh degenerate in neglect. The culture that Muslim landlords of United Provinces had wanted to protect and promote with the idea of Pakistan, debated endlessly at the dining halls of Aligarh Muslim University for decades, are left back in Agra, Lucknow and Hyderabad. Mohajirs are barely tolerated in the land that they had once idolized.

The independence day of Pakistan was advanced by a day because it wasn’t possible for Lord Louis Mountbatten to be in two places at the same time for handover ceremonies. Since the Quaid was to preside over the Dominion of Pakistan as the Governor-General, the Lord had to move to New Delhi on the appointed date. Meanwhile, the Mahatma was somewhere in Bengal struggling to cool atavistic passions.

Due to imperial pretensions, Pandit Jawaharlal Nehru—heartbroken Mahatma didn’t want to have anything to do with the truncated India—adopted the Lions of Ashoka and his Dharma Chakra as emblems of the ‘old and new’ India and declared that the ‘Truth Alone Triumphs’ will be its motto. The Quaid settled for something that suspiciously looks like a royal shield or coat of arms of a West Asian sheikhdom. The motto celebrates faith, unity and discipline rather than truth, diversity, or beauty. It’s possible to argue that authoritarian values have been integral to the very idea of Pakistan ever since. The irony is that India too now wants to emphasize ‘faith, unity and discipline’ in an attempt to be the true Hindustan rather than what it had wanted to become at the time of independence.

Authoritarian impulses
Apart from the fanaticism of faith, there are quite a few secular ideas that have prevented Pakistan from emerging as a democratic country. Defining itself as the ‘other’ of India with a strong sense of vulnerability in CE 1947 was perhaps the fundamental flaw of its national agenda. There is a reason it’s sometimes said that other countries have armies, but the Pakistani Army has a country. A political entity built around the idea of enduring enmity has to cede primacy to its defense rather than productive forces.

A coup d’état rather than street protests, ballot boxes or consensual settlements as the favored method of transfer of power is also born out of the belief that keepers of faith know what’s best for all the rest. In fact Rawalpindi, where defense forces of Pakistan are headquartered, once used to be pind (settlements) of Rawals (defenders of Shaivite faith). Beliefs brook no arguments bar the sword, ‘benevolent dictatorship’ is an oxymoron, and saviors on horseback seldom leave on their own accord.

The constitutional innovation of ‘doctrine of necessity’ is another idea that has done Pakistan great disservice. It’s a weapon of self-defense for the statute, but rulers often use it to kill the constitution as it has been repeatedly done even in Nepal in the name of royal action, judicial activism or political consensus.

Insensitivity to the plight of the people induces instability and consequent rise of despotism. Mishandling of Cyclone Bhola in 1970 is said to have precipitated subsequent uprisings in Bangladesh. Democratic India had dealt with its natural calamities in much mature manner. Lessons are always there for whosoever wants to learn.

On the 70th Independence Day, two cheers to the people of Pakistan; much remains to be done to realize Quaid’s dreams. And similar felicitations to the people of India: Mahatma’s dreams are still distant, but the risk of losing whatever little Panditji was able to institutionalize is growing bigger by the day in the name of Hindutva.