The many joys of baking 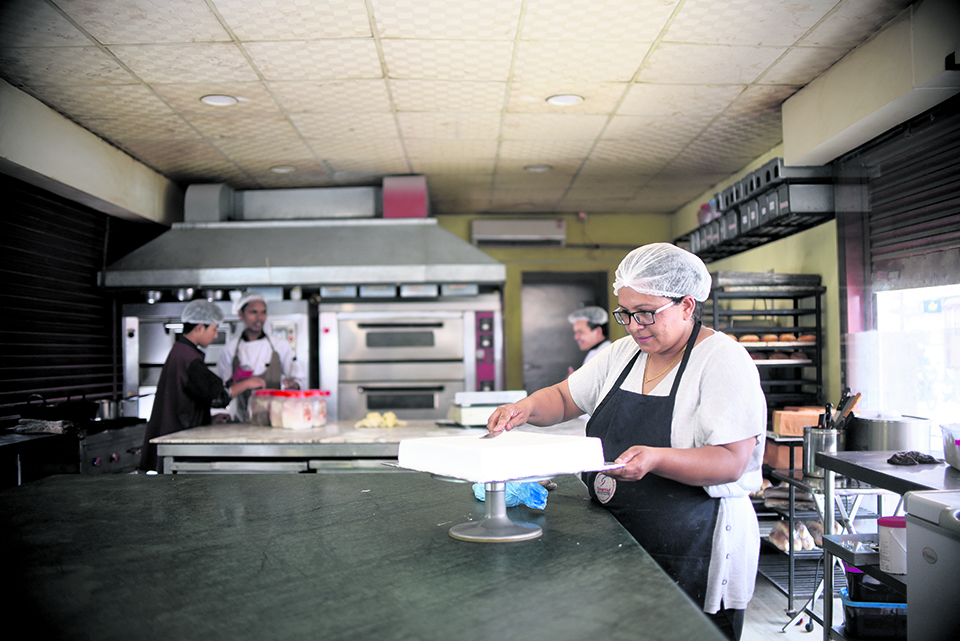 Chef Sushila Upadhyay Thapa heads the bakery and confectionery division of Ageno restaurant
in Jhamsikhel, Lalitpur. She works throughout the week, not even taking a Saturday for herself,
and works from ten in the morning to nine at night (from opening until closing).

In the nine years of her career as a chef, she has worked with the same vigor and tenacity as she had when starting out.

Among the many responsibilities she has, one is delegating tasks among her team of 15 cooks, assistant cooks and cleaners. Each day their team dolls out cookies, pastries, cakes, scones, and rolls which are, considered by many, as some of the best in town. However, Thapa gives finishing touches to everything that comes out of the bakery.

“I personally love decorating cakes and pastries. Visuals play a huge role in bakery items so I learnt cake art very early on in my career. I do the majority of the decorations myself,” says Thapa while piping swirls of mousse in hundreds of shot glasses. What she makes in a day and what she helps make are, she adds, impossible to keep track of. Hundreds she guesses if not more.

In retrospect, she thinks she has come a long way from wondering how “the pretty things” on TV were made to making them herself. As a child, her first introduction to a bakery item (except for bread) was a muffin. What fascinating things muffins were, she remembers thinking. “They tasted like bread but with a softer texture and were sweeter. I instantly took a liking to them,” she says.
In the earlier days Krishna Pauroti in Kamalpokhari, Kathmandu, rolled out four wheeled carts with bread and milk around the valley. Born and raised in Kathmandu, Thapa waited every morning for the tinkling bells of the cart to buy their supply of bread for the day. “I think my fondness for bakery items is also because of the memories I associate with them,” she explains.

She spent hours watching TLC and other food programs on various channels. From macaroons to beautifully iced cakes, she watched them all being made. Even though she was itching to try the recipes, baking materials were difficult to get hold of then. Besides, her parents dismissed the idea altogether.

Marriage proved to be a turning point in her life. Her husband happened to a chef at Hotel Dwarika and an opportunity presented itself for Thapa to do a bakery course at the hotel. It was there she baked a cake for the very first time. Her awkward attempts at home with a pressure cooker were no match for what she made in the course of her training. Whisking, mixing, baking she learnt a great deal in her eight-month long course. Right after that, she opened a bakery by name of Traditional Bakery and ran it for eight years. Only recently did she close the bakery to take up a job offer at Ageno restaurant.

Running a bakery was both fun and difficult. As her clientele expanded, she had to create more sophisticated items. Learning and making something new was an everyday challenge that she took in her stride. Dealing with customers was sometimes not very pleasant. “Even a few years earlier, people had reservations against bakery items. Some people would take a look at the prices and be very vocal about their opinions. My neighbors thought of me as someone who made and sold bread for a living. It could get quite disheartening at times,” she says. She marvels at the shift in perception of people in regards to food these days.

Whatever the past might have been like, Thapa loves her work today. Even today she loses track of time when she’s in the kitchen. Bakery and confectionery items are made in low temperature rooms meaning winters are particularly brutal. Thapa doesn’t mind any of that nor does she mind being covered in frosting and icing all day.

Even when she does something she has been doing for years, Thapa says everyday is different for her. Just recently a cake order for a baby shower came in and the request was for a life-sized figure of an expecting mother. Thapa says she thought about this for a long time and used layers of cake and cream to make a figurine of a lady with a baby bump. It took her three days to make the cake but seeing her vision (and that of her client) come to life brought her great satisfaction.

It’s because of this that she doesn’t mind working seven days a week. She takes an occasional break when she needs to but for the most part she’s in the kitchen with her team. “What I love about bakery is that nothing you do is ever a mistake. If you get your frosting wrong there’s still something you can make out of it. If a loaf of bread goes wrong you can turn it into a cake. I love the creative process of it among other things,” she says. But above all else, baking is what gives her joy and peace. “And that’s what actually matters in life,” she concludes.