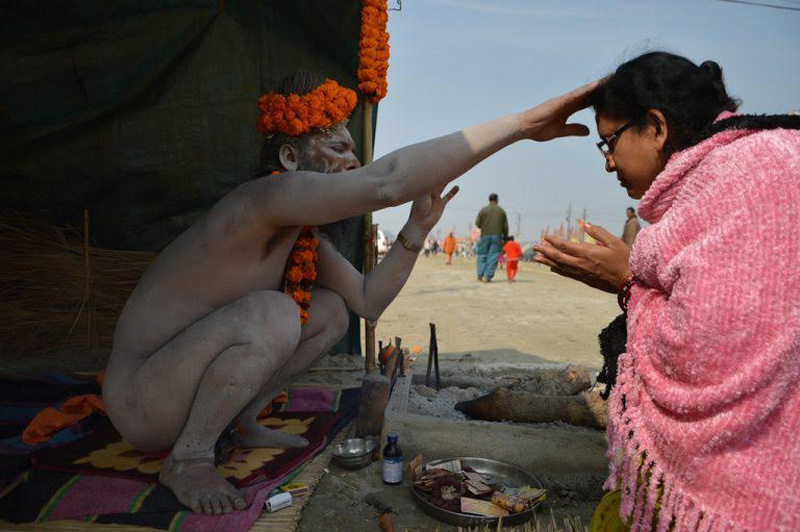 Though we have few highly revered goddesses, they are subordinate, not as mighty as their male partners
The dramatic images of naked babas bestowing ashirbad on female devotees at the Pashupatinath during Shivaratri got plenty of people talking. In social media, some expressed utter fury over the ‘nonsense’ culture. Some others suggested that we should ‘try to understand the logic’ behind the Sadhus and their ‘holy phallus’, and ‘not get offended’ easily.

Commenting on one of the provocative posts, a Facebook account-holder named Deepak Thapa wrote: ‘That’s the nakedness of mere physical body. We got to cover our mental nakedness instead’. Another answered: “Why then women’s body, when it is exposed, you create hue and cry over it?” The debate soon turned into a hot dispute.

Whether we should wear clothes and cover our bodies or whether we are better off without such covers is a topic for a separate discussion. But despite being a ‘feminist’, I take the nanga baba drama easily. I feel that diverse cultures have their own charm.

However, whenever I talk of the God and religion, I’m always bothered by something. This happens even though I am a firm believer in God. What is troublesome is not my faith but the images of the almighty we come across.

Though we have few highly revered Goddesses in Hindu religion, these are subordinate characters, not as independent and mighty as their male partners. Our Parbati does not look as powerful as Shivaji, who is responsible for destruction or death, which is essential for life. Similarly, Bishnu is considered Paalanhar, one who takes care of all the creatures. Brahma, the creator, is male too.

There is no relief even if you turn to Christianity or Islam. Divinity has been made masculine.

Feminists cannot be comfortable with such humiliating gender discrimination. It is not hard to figure out that few excellent humans (men) introduced the popular images of gods to the world.

Lack of strong female gods in our mythologies is obviously due to lack of female writers and historians. When men were busy ‘creating’ gods, women must have been occupied with creating babies. Females delivered real children, and male authors delivered gods.

If gods and religions had been created by gender-sensitive people, the world would be different today. And that difference would differently impact female roles, sexuality, choices and their place on earth. The society would be more female-oriented.

Hence lack of gender balance in religious discourses is disturbing. But, sadly, conventional ideas and structures are greatly loved, and they continue to affect human psychology and overall human behavior. In conservative societies, those ideas control peoples’ attitude and activities. For instance, some communities have not been able to do away with ‘Chhaupadi’ (isolating girls and women during menstruation and delivery) in western Nepal even today, as they fear deities who hate ‘impure blood’.

Religions and cultures enslave all members of the society, but women especially. The resulting economic, social and political disadvantages leave them more vulnerable to exploitation. Equal political space for the two genders is not something even ‘powerful’ nations can boast of. UN data suggests 35 percent women worldwide have experienced either physical and or sexual violence. In fact, domestic violence is rampant even in rich countries.

In an episode of Satyamev Jayate hosted by Amir Khan, veteran gender expert Kamala Bhasin suggests men treat their wives as friends, lifetime friends. She suggests women treat their husbands the same way. Between friends, there is no slavery, violence, suppression or oppression.

When there is dignity for both, only then can there be equality and justice. Neither patriarchy nor matriarchy but a middle path is the best solution, she notes, and adds that that is very much possible.

There could be many hurdles to creating such a society. Besides attempts to create equal opportunities for women in all fronts, efforts must be made to strike at the root of such discriminations. The religions and doctrines that glorify masculine traits must come under serious scrutiny. So long as the world is comfortable with devotees revering the phallus of Shivaji and those of the Sadhus, we cannot think differently about masculine and feminine essence and gender roles.

Our vision must transcend that. We must do something about the lack of feminine Gods, at first.

CHITWAN, Dec 24: Few years ago, the number of endangered gharials in the Rapti and Narayani rivers inside the Chitwan National... Read More...

Only six of 165 candidates picked for House of Representatives under FPTP are women, which comes to a paltry 3.63... Read More...

The male version of menopause

Dr Nimesh Poudel considers it a very important discussion. If there are some who consider chances of men experiencing a... Read More...