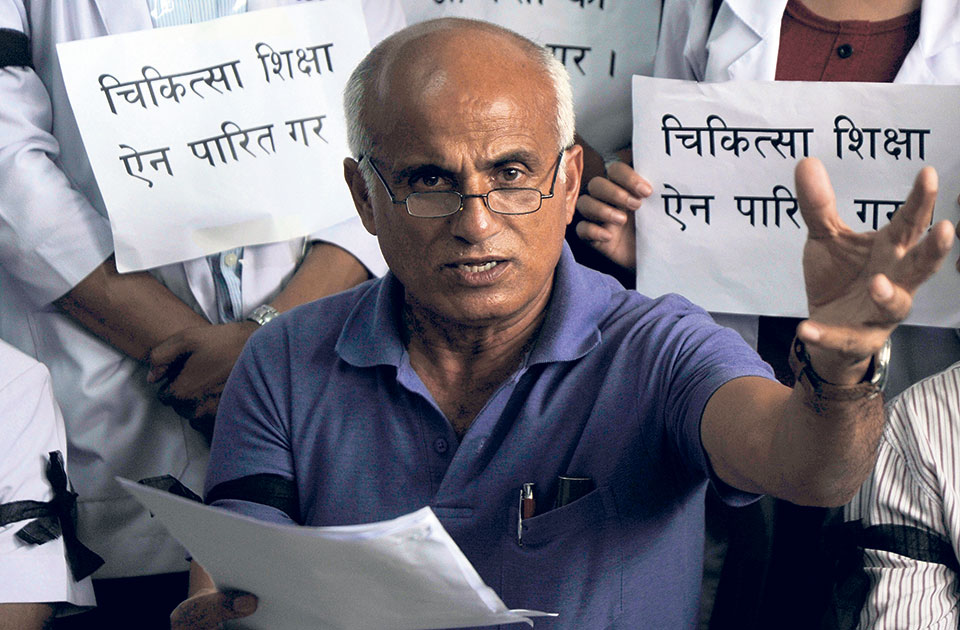 Arguably the most popular and most loved man in the country at the present, Dr Govinda KC continues to inspire the masses. He is the man who has been risking his own life time and again for a single cause: Medical reform in Nepal where every citizen has the right to proper health services.

Even though the government and Dr KC had reached some agreements regarding the demands several times earlier, the lack of implementation of the agreements has forced him into hunger strikes repeatedly. But every time Dr KC announces hunger strike for health sector reforms, the civil society supports him each time. The message is clear – Dr KC’s demands are public demands. And, with incredible strength and courage, Dr KC continues his crusade, for the sake of the people who have their hopes pinned on him.

On 15th August, he suspended his 11th fast-unto-death after 23 days because of disastrous floods in the plains. He felt the government’s attention, at the moment, was needed elsewhere and long-term reforms could be discussed after the current crisis was managed. And urging the government to work with flood victims, he ended his hunger strike. As a medical doctor, Dr KC has a history of rushing to disaster-hit areas to provide his services.

The message is clear – Dr KC’s demands are public demands. And, with incredible strength and courage, Dr KC continues his crusade, for the sake of the people who have their hopes pinned on him.

Dr KC, an orthopaedic surgeon, is unmarried. His family has always been his patients, many of whom he has treated with his own money as well. His mother and two brothers have always known him as someone who is ready to lay down his life for something he believes in. And, over time, the whole nation came to know that as well.

He completed his high school education from Budhanilkantha School in Kathmandu and did a course on Health Assistant prior to going to Bangladesh for his MBBS. Since his foray into the medical field, Dr KC has been relentlessly working to better the condition of the health sector in the country. Even now he is fighting to regulate medical education in the country and for the immediate endorsement of the Health Profession Education bill. He has also slammed political leaders for their apparent unwillingness to bring about much needed reforms in the medical sector.

Just as the night decides to sleep And the moon decides to tease, the lone wolf decides to... Read More...

'I voted from space': Lone American off planet casts ballot

CAPE CANAVERAL, Nov 8: The lone American off the planet has cast his vote from space, keeping with NASA's motto of... Read More...

It’s going to be a significant two months for Bikram Bahadur Rana and Laxmi Kunwar. Rana, who is still affiliated... Read More...