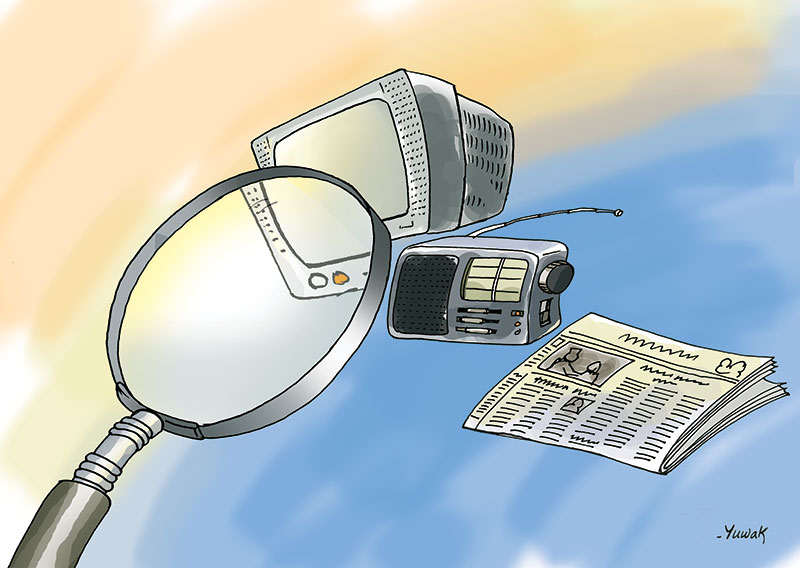 It is time we moved past the tantalizing, anecdotal examples of the power of local news and focus more on the real agenda of the community itself
Local media landscape in Nepal is a “happening place” of increasing dynamism, but often without a clear direction. In the districts and villages, the sheer quantitative growth of news outlets—often broadcast and online media, and sometimes newspapers—is simply astounding. During my recent trip to Dang, a journalist there put it succinctly: So much is happening; but what’s our destination? We are in fact totally lost.

The vehicles are there, but what about their content, and the direction?

Journalists and editor-owners (the two-in-ones, usually) in Dang, and in provincial cities like Dharan and Damak agree that they are confronted with many of the issues faced by our national media, with the twist that national media are a constant target of criticism at the local level. National media are at once the standards to measure up as well as the muddle to criticize.

Journalists from the inner Madhesh valley of Dang, in their social interactions and small talks, often refer to the “hidden mission” of the media. They talk about mouthpiece or handout journalism, ad hoc news process without any follow-ups, lack of enterprise reporting and investigative work. The local media are often emotional rather than factual, and the assertion today, for example, that “our” town should be the provincial capital, no matter what, makes for a belligerent journalism.

Local journalists also bemoan the increasing practice of cut-and-paste in the profession, especially in online media platforms; deteriorating standards of language and usage, and most regrettably, punditry and lazy, armchair reporting. Forced to cover anything and everything, without a beat, specialization is hardly an option for many, and journalists act merely as generalists.

Social and economic contexts, marked by disdain for declining journalistic credibility as well as the lack of investment in the news process, continue to hamper the image and health of local journalism. And in no uncertain terms, local media professionals blame national media outlets for some of their distinctive woes. For example, Blast Times, the leading daily of the eastern region, lost as many as 6,000 subscriptions within a few months of the launching of regional editions or pages of major national dailies. Its editor, Kishor Karki, says the work is cut out for him: either adapt or perish. And, no doubt, by adaptation he means prioritizing local news and expanding the digital presence.

Karki’s candid remark illuminates a trajectory of local news in Nepal. According to him, earlier at Blast, local news was synonymous with crime news, to the point that Blast Times was often referred to as Balatkar (Rape) Times. The next phase in the evolution of his paper was dominated by news of kangaroo courts, during the Maoist conflict, followed by current emphasis on diversification of topics, including regionalism, grievances, constitution implementation and development. As he made progress in the learning curve, and as competition in the market mounts, Karki has realized the need to make meaningful connection with the audience with substantive news.

So far, with the exception of some radio programs, the local news is all deviant, sensational and seldom substantive. Reporters based in districts and villages and those working for national media never tire of criticizing their outlets for undervaluing and even mercilessly butchering their dispatches. The western debate on local news is often associated with grassroots democracy and citizen engagement. Our debate hasn’t even started. We are perennially obsessed with all things “national” or “international”. Even a local tabloid labels itself as “a national newspaper”. Our local is often associated with neglect, underdevelopment, and disillusionment. Must no local elections or local development mean no local news?
Hardly so. The biggest stories of our times are local that do not make news locally: no local government in a democratic polity, the largest demographic shift in history, dangerous levels of inter-generational gulf, social discord and gender-specific suicides rates. And positively speaking, gains in health, environmental preservation, and bursts of entrepreneurship among the new generation even if that means a gamble to some people, for example, loss of several lakh rupees on a failed effort at a start-up like a news portal.

It is time we moved  past the tantalizing, anecdotal examples of the power of local news—that a lost buffalo was found after the story broke, that community members were motivated by a news story to donate five million rupees to treat the physical deformity of a child in the village, that a village girl now runs a restaurant in Tokyo, that a congregation of Shivates  reached a local radio station to stop the broadcasting of Krishna bhajan on Monday, the day of Shiva, etc.—and focus more on the real agenda of the community itself.

On the upside, however, the new generation of journalists demonstrates sparks of professionalism and optimism. They are raising voices on development and investigative journalism. They are stressing on the need for professionalization via training and education. Yet, lacking social scientific research on the topic, it is impossible to quantify or qualify the exact nature of local news in Nepal. But it is safe to say that with the growth of channels, the volume of local news must be at least somewhat increasing, however perfunctory the coverage.

Overemphasis on quantitative growth of media rather than their quality has seriously undermined public interests. Local radio stations and print media, especially professional, independent and community-based outlets, can play an important role in protecting public interests. But for this to happen, they have to invest in quality journalism. The government should help alleviate financial constraints of such public-oriented news outlets.

To foster grassroots democracy and serve the public interest, government legislations must provision certain percentage of local news in broadcast and community media.

So far, many of the independent community media are independent and community-oriented only in name. They must be able to independently and constantly monitor not only excesses of the government but also the marketplace. They should identify the priorities of their communities and develop their own strategies to address them. In an increasingly divided society, their role is essential in creating and disseminating information necessary for decision making on shared values, culture and concerns at the local level.

A concentric view of news involves national and international outlets in the debate on local news. Just as we criticize a story in The New York Times distorting information on Nepal, people in Kalikot, Kavrepalanchowk or Kanchanpur complain about misreporting about their districts in national newspapers.

The mainstream national media have joined the bandwagon of consumerist neo-liberal economy. They are profit ventures, and their public service obligation is eroding fast. The result is an adverse effect on the local media. Unless new approaches are embraced in doing journalism at the local level, the communities themselves will be subject to many undesired repercussions.

One of the devastating effects of structural change—concentration and homogenization of content, with the overarching phenomenon of technological penetration— is that our media have intensified status quo. In their ambition to reach the (national) mass consumers, these media increasingly undermine variety, depth and breath in the information they cater to the public.

Kathmandu pervades, not the other “happening place”.

The writer is associated with Media Foundation