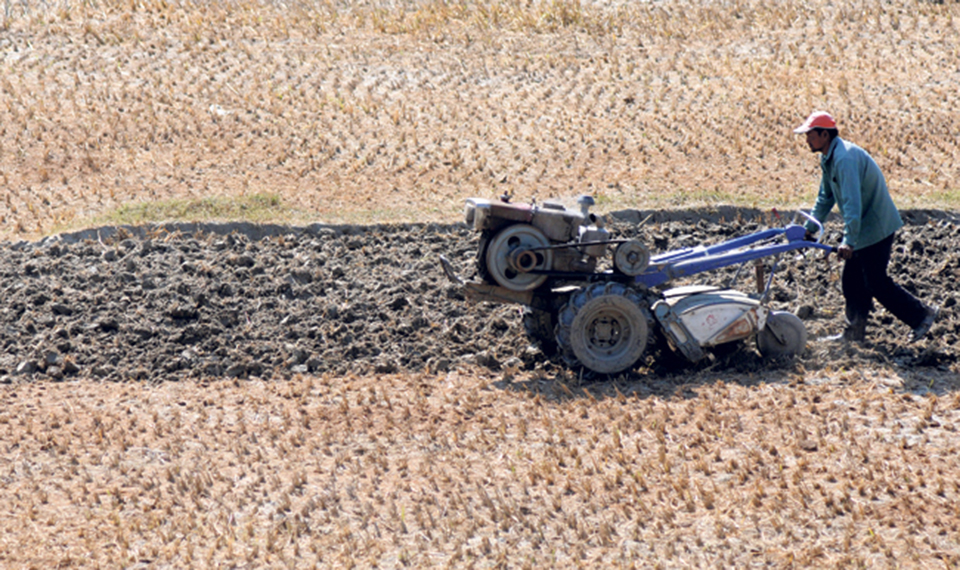 Up until the early 1970s, when Nepal was producing sufficient food, some surplus used to be exported. The food shortage in 1971-72 highlighted the need for an agency to properly manage demand and deficits, and thus the Nepal Food Corporation (NFC) was born. The NFC has since been distributing food in deficit areas with particular focus in Karnali. The World Food Programme (WFP) has also prioritized these areas. Yet food shortage in Karnali and other places keep happening.

Minor differences in food habits aside, Dal, Bhat and Tarkari (bean soup, boiled rice and curry) is the staple diet of Nepali people. Bhat, steamed rice, constitutes more than 60 percent—up to 75 percent in some cases—of Nepali diet and is consumed mostly by people with better economic status. This is evidenced by the fact that food provided here under food aid is mainly rice. Nepal’s mountainous districts are food insecure only in terms of rice. Had we spent our food aid in the past four decades on roads and local crops instead, these districts could have been self-sufficient by now.

We should grow what is locally possible and eat what is available locally. If we have food production programs based on this principle and promote local food production and consumption, food shortage areas can also be self-reliant in short time. Nepal is agriculturally diverse and we already know crops—such as potato, buckwheat, different types of beans, naked barley, wheat, maize, cabbage, cauliflower, carrot, radish, and fruits like apple, pear, apricot and walnut—can be successfully grown in those areas.

Livestock is well integrated with production of stable food crops in the mountain region. Cattle, goat and sheep, the common livestock of the region, till fields and provide manure, milk and meat. In fact, livestock sector covers about 50 percent of household income in this region. As this region has vast grassland for grazing, livestock should get top priority in our agricultural investment.

Studies conducted by various organizations on agricultural transformation of mountain areas show farming of High-Value Crops (HVCs) has boosted food security and improved livelihoods.
In recent times, people have realized that subsidized rice and program like “Food for Work” cause dependence on external food and reduce local production. By receiving food aid this way, they have realized, they are becoming less interested in agriculture.

Local people complain that food aid is changing their dietary habits, making them prefer rice over their local foods. Consumption of white rice has increased, partly as a result of food aid which provided non-local white rice and partly because of the belief that such rice eaters are upper-class people. Local production potential and nutrition issues have been almost forgotten. Moreover, approaches to link value chain development with food and nutrition security have been almost ignored.

Food aid in Nepal comes in three forms: 1) Regular supply of subsidized food in deficit areas; 2) food for work; and 3) emergency or “relief food aid”. The WFP provides all these types of food aid to Nepal, with the priority on relief aid. The government has been supplying subsidized food to mountain areas since the early 1970s, which in turn has discouraged local production. Time has come to discourage such programs. Local food production, which increases the availability of healthy foods, should be promoted.

Emergency or “relief food aid” is supplied to extremely high-need areas for immediate relief, and is usually given for free. Likewise, food for work is a development tool that brings specific development projects to an area and pays local participants primarily in food. The WFP provided food assistance to two million people in earthquake-affected areas within six weeks of the 2015 quakes. It has been using food assistance to support early recovery by paying people with food or cash to rebuild community infrastructure. Such program should be welcomed and continued.

There are ways to increase food security in deficit areas. If production factors—land, water, labor and potential crops, for example—are favorable, increasing local food production and productivity is the best and most sustainable way. We have land to grow crops and water to irrigate them. We have already identified potential crops for cultivation. If we can attract youth to agriculture and farming, our labor problems will also be solved. Nepal has a Special Programme for Food Security but it has thus far been ineffective. Youths are not encouraged to work in food production. In fact, we are losing the work culture in agriculture.

Working in the field is considered the hardiest and least prestigious task because farming is connected with manual labor. Also, there is a belief that agricultural work does not require any education except traditional training. Such limiting beliefs and social values need to change. For this, we need to modernize agriculture with greater use of scientific technologies. Only then will our youths be attracted to agriculture and our work culture be revived.

Nepal records over 3,800 new cases for the two day in a row
4 hours ago