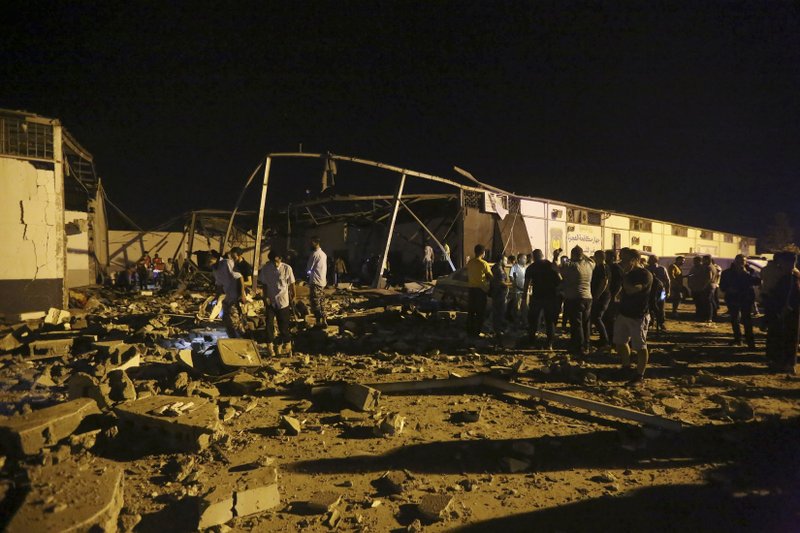 BENGHAZI, July 3: The Latest on developments in Libya, where an airstrike on a migrant detention center in Tripoli killed at least 40 people. (all times local):

The U.N. refugee agency is calling for an immediate end to bringing migrants trying to cross the Mediterranean back to Libya after an airstrike hit a detention center, killing at least 40 people.

Charlie Yaxley, spokesman for the UNHCR, noted that the agency had warned less than two months ago that anyone inside the Tajoura detention center was at risk of being caught in the fighting around Tripoli. Then, an airstrike that hit nearby injured two migrants among more than 500 people detained there.

Yaxley says UNHCR is sending medical teams to the site after the latest airstrike.

Europe is equipping and training the Libyan coast guard, which has intercepted thousands of migrants in the Mediterranean and taken them back to detention centers in Libya, where many languish without sufficient food or medical care.

A Libyan health official says an airstrike has hit a detention center for migrants in a suburb of the capital of Tripoli, killing at least 40 people.

Malek Merset, a spokesman for the health ministry of the U.N.-supported government, says the airstrike on the Tajoura detention center also wounded 80 migrants.

In a statement, the U.N.-supported government blamed the self-styled Libyan National Army, led by commander Khalifa Hifter, for the airstrike.

Libya is split between two warring governments and Hifter’s forces control much of the country’s east and south.

LAMJUNG, July 5: A Nepali national was among those killed in an aerial strike carried out by a rebel group... Read More...

Do not treat migrant workers as refugees: Mahat

I will solicit votes with the agenda of constitutional monarchy: Rabindra Mishra
39 minutes ago