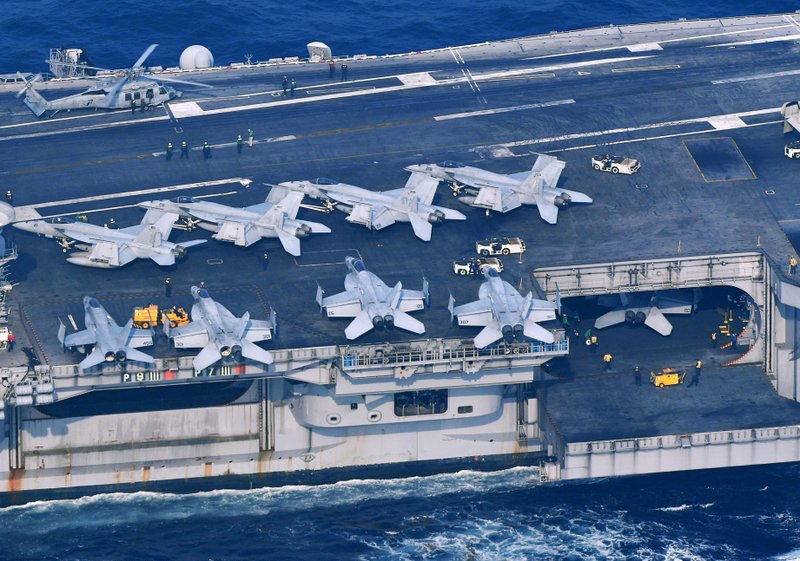 One of Tokyo's major subways systems says it shut down all lines for 10 minutes early Saturday after receiving warning of a North Korean missile launch.

Takizawa says it was the first time service had been stopped in response to a missile launch. Train service is generally suspended in Japan immediately after large earthquakes. Tokyo Metro decided earlier this month to stop for missile launch warnings as well.

North Korea's state media has reiterated the country's goal of developing a nuclear missile capable of reaching the continental United States on the same day rivals Washington and Seoul detected a failed missile launch from an area near Pyongyang.

It said: "The large territory that is the United States has been entirely exposed to our pre-emptive nuclear strike means."

Referring to the United States sending the USS Carl Vinson aircraft carrier to Korean waters, the newspaper said that "rendering aircraft carriers useless is not even a problem" for its military.

The newspaper says that the North displayed three types of ICBMs during the parade, including two new types that were inside the canisters.

Analysts say the North's existing liquid-fuel ICBMS, including the KN-08 and KN-14, are potentially capable of reaching the U.S. mainland, although the North has never flight tested them.

Japan's government spokesman says the missile launched by North Korea is believed to have traveled about 50 kilometers (30 miles) and fallen on an inland part of the country.

Chief Cabinet Secretary Yoshihide Suga (yoh-shee-hee-deh soo-gah) said the ballistic missile was fired to the northeast around 5:30 a.m. from an area in the vicinity of Pukchang, north of Pyongyang, the capital.

He spoke at a news conference following a meeting of Japan's National Security Council.

France's U.N. ambassador says the U.N. Security Council is "mobilized" and unanimous on the need to denuclearize North Korea.

Francois Delattre said at the United Nations after North Korea's apparently failed missile launch Saturday that while there were "nuances" on policy to be worked out among council members, there is unanimity on the need for North Korea to give up its nuclear weapons.

The joint chiefs said in a statement on Saturday that the missile was fired 49 degrees northeast from an area near Pukchang, just north of the capital Pyongyang. It didn't immediately provide an estimate on how far the missile flew.

South Korea says it's still analyzing what type of missile the North fired.

A U.S. official, speaking on condition of anonymity to discuss sensitive matters, said the missile was likely a medium-range KN-17 ballistic missile and that it broke up a couple of minutes after launch.

South Korea's military said in a statement Friday afternoon that North Korea had fired the missile from an area near the capital of Pyongyang, but provided no other details.

Trump did not answer reporters' questions about the missile launch upon returning to the White House from a daytrip to Atlanta.

But he commented on Twitter, saying, "North Korea disrespected the wishes of China & its highly respected President when it launched, though unsuccessfully, a missile today. Bad!"

Japan has protested the latest missile launch by North Korea.

He added that Japan "cannot accept repeated provocation by North Korea" and had "lodged a strong protest against North Korea."

Japan has become increasingly concerned in recent weeks about the possibility of a North Korean missile attack targeting Japan or U.S. forces stationed in Japan.

Japan's public broadcaster NHK has aired footage of a U.S. aircraft carrier sailing off the coast of Nagasaki prefecture in southern Japan.

The USS Carl Vinson is heading north toward the Korean peninsula in a show of force after satellite images suggested North Korea may be preparing to conduct a nuclear test.

NHK said it shot the footage Saturday morning from a helicopter.

Nagasaki is in Kyushu, the southernmost of Japan's four main islands.

South Korea's military said in a statement Friday afternoon that North Korea had fired the missile from an area around the capital of Pyongyang, but provided no other details. U.S. and South Korean officials say the launch apparently failed.

Trump returned to the White House from a trip to Atlanta shortly after the news broke. He did not answer reporters' questions about the missile launch.

Trump has threatened military action if North Korea continues its pursuit of a nuclear weapons program. He has also said he would prefer to resolve the issue through diplomacy.

A U.S. official says North Korea has tested what was likely a medium-range ballistic missile.

The official says the missile broke up a couple minutes after the launch and the pieces fell into the Sea of Japan.

The official was citing an American assessment and says it appeared to be a medium-range KN-17 ballistic missile.

The official wasn't authorized to speak publicly on the matter and demanded anonymity.

South Korea's foreign minister is warning that if the international community doesn't respond to North Korea's repeated provocations now, "we will only further feed the appetite of the trigger-happy regime in Pyongyang."

Yun Byung-se told a ministerial meeting of the U.N. Security Council on Friday that it should take additional punitive measures before North Korea launches more ballistic missiles or conducts a new nuclear test — not afterward.

He proposed "potent measures" including halting the export and supply of crude oil to North Korea, completely cutting off its hard currency earnings by suspending all coal imports from the country, downgrading diplomatic relations, "and seriously considering whether North Korea, a serial offender, is qualified as a member of the U.N."