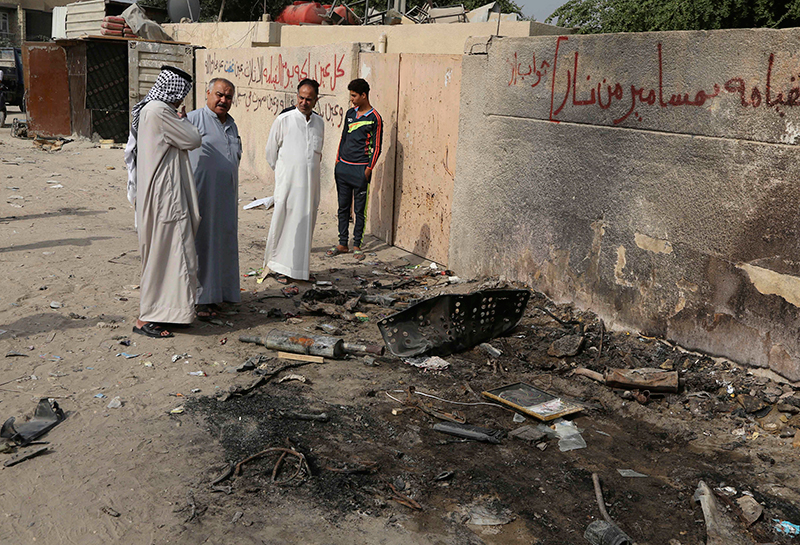 People inspect the aftermath of a deadly car bomb explosion that hit a popular fruit and vegetable market in a commercial street in Baghdad's northwestern neighborhood of Hurriyah, Iraq, Monday. (AP)

Iraqi officials say bombings in and around Baghdad have killed at least 14 people and wounded more than 50.

Medical officials confirmed the casualty figures. All officials spoke on condition of anonymity as they were not authorized to release information.

No group has immediately claimed responsibility for the attacks, but they bore the hallmarks of IS, which has taken credit for similar bombings. The extremist group has repeatedly targeted Iraq's Shiite majority and security forces.

An Iraqi officer says hundreds of hungry civilians are lining up for food in eastern neighborhoods of Mosul recently retaken from the Islamic State group.

Maj. Salam al-Obeidi says some 700 residents assembled Tuesday in three areas of the Zahra and Qadisiya neighborhoods, the latter of which was the scene of a fierce IS counterattack a day earlier.

He says Iraqi forces gave the people their own food but did not have enough to meet their needs.

Iraq launched a major offensive last month to drive IS out of the northern city, the country's second largest, which is still home to more than 1 million civilians.

The United Nations says fires set by Islamic State militants at oil wells and a chemical plant near Mosul have forced over 1,500 people to seek medical treatment for respiratory problems.

It says the mid- and long-term effects on people's health, the environment, agriculture and livelihoods could be dire.

IS shelled and set fire to the al-Mishraq Sulfur Gas Factory south of Mosul in late October, causing the deaths of at least four people from toxic fumes, the U.N. has said, likening the attack to the use of chemical weapons.

Nearby oil wells set ablaze by IS have been burning uncontrollably since June.

BAGHDAD, May  30: A massive bombing by the Islamic State group outside a popular ice cream shop in central Baghdad and... Read More...