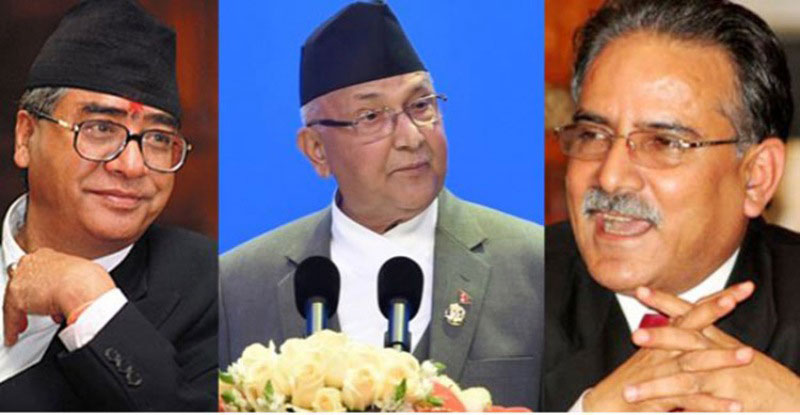 The issue of federalism has divided the country ethnically, emotionally and socially before it has been implemented
In the recent Olympics in Rio, three runners were seen cooperating in relay races to win gold medals for themselves as well as for their country. It was a cruel reminder of the political relay race in Nepal. In Nepal, we get to see the competition but not the cooperation. Unlike sportspersons, our politicians have the habit of finding each other’s faults and pulling each other’s legs. Along the way, they not only miss the gold for themselves but also deprive the country they rule of its laurels.

Olympics do not take place every year, nor does the opportunity to serve the country as prime minister arrive frequently. Public frustration with the current state of affairs is palpable in all sections of the society. The new constitution let the people down by bringing about perpetual instability, which in turn is inviting foreign interference. The likely Balkanization of the country under a federal system is yet another insurmountable hurdle.

Federalism has divided the country ethnically, emotionally and socially before it has even been implemented. Nepal is likely to witness the worst political disaster in the past 250 years of its history as a nation-state. Questions are being raised if democracy is worth it, if it comes at the cost of our independence. The popularly elected leaders themselves are advocating for benevolent dictatorship.

In the first phase of the political relay race, KP Sharma Oli came to power, at a time the country was struggling to come to terms with the devastating earthquakes, shortly followed by Madhesh movement and the Indian economic blockade.

The circumstances exalted Oli to the status of ‘national hero’ as he was able to withstand the Indian pressure and signed trade and transit agreements with China. It was amazing for Nepalis, not to speak of the displeased India, to see him transform into “a Nepali patriot” upholding national interests. Not long ago Oli was blamed for selling out to India after signing on the ill-fated Mahakali Treaty.

Despite his failure to relieve people from the shortage of vital fuel and cooking gas during the blockade, Oli turned out to be a larger-than-life figure just for refusing to give in to India’s arm-twisting. We don’t know when the transit treaty with China will come into force, so as to minimize Nepal’s near complete dependence on India. But it has already added a feather in Oli’s crown which is comparable to the crown of King Mahendra, who had taken an equally bold step of building Araniko Highway linking Nepal and China in 1961.

Pushpa Kamal Dahal has succeeded Oli under highly dubious circumstances of political machination, odious Indian scheming and through a sudden alliance with its erstwhile enemy Nepali Congress. PM Dahal has vowed to learn from past mistakes and to try to win people’s hearts. If he can rise to the occasion, he can continue to toe Oli’s line. He has promised to give continuity to development projects introduced by Oli, instead of fulfilling Indian interests. He has a chance, the last in all likelihood, of being pardoned for all the deaths and destruction witnessed during the 10-year-long insurgency, if he can only defend Nepal’s interests and integrity like his predecessor. If he can prove his loyalty to Nepal and Nepalis he will remain in people’s hearts even after vacating Singha Durbar in nine months.

The same goes for Sher Bahadur Deuba, the PM-in-waiting. No matter what he says about Kathmandu-Nijgadh fast-track and Upper Karnali projects, he too has a chance to salvage his “incompetent” image. But this is unlikely unless his party exerts immense pressure on him not to compromise on our national interests. He will drown his party, himself and Nepali democracy if he repeats past mistakes.

This is the last chance for all—the PM who recently resigned, the incumbent and the PM-in- waiting—to save democracy, multi-party system and to prove their leadership skills. If they make a single mistake, it could lead not only to their downfall but the dismissal of the constitution itself.

Messi’s last chance for national glory slips away in Kazan