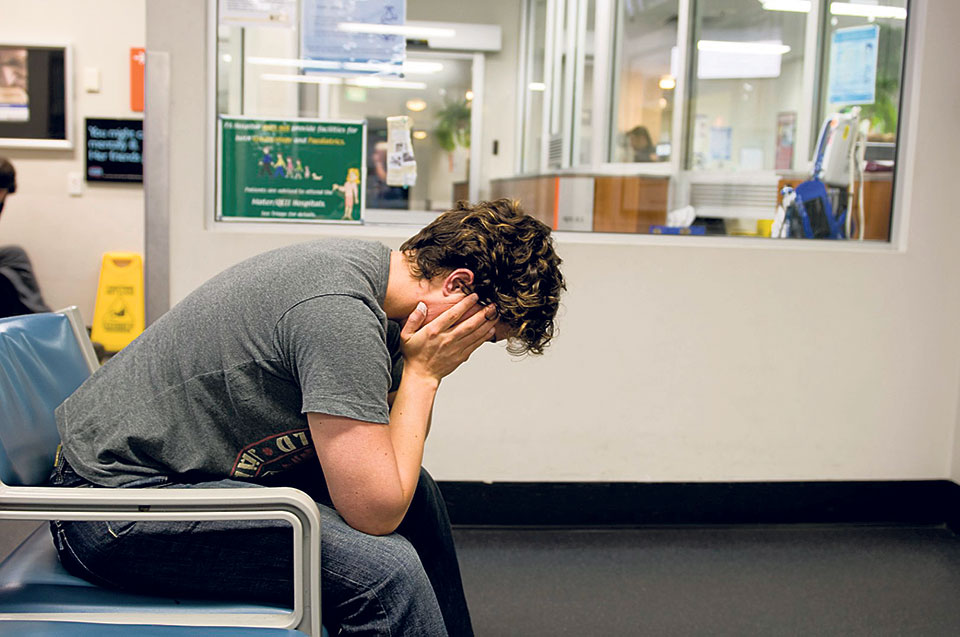 It was while waiting for my father, who was recovering from a bout of pneumonia in the hospital that the thought struck me. Here I was at 2:00 am, unable to sleep, always on edge, waiting to hear if I would be summoned by someone for this or that requirement – all while my father was not only out of danger but well on his way to recuperating. The fact that I was simply fulfilling my filial duties did not detract from the futility of all this waiting.

In Nepal, if someone happens to get hospitalized, this occurrence tends to draw in the entire family and sometimes even the extended family into its orbit – involving everyone in a full-time exercise tending to the patient until they recover or get discharged. It takes no less than a small army of family members, friends and well-wishers to see a person through their medical treatments here.

In various hospitals around the country, many of us might have experienced this ‘waiting game’, wherein at least one person must be at the beck and call of doctors and nurses in case they need something for the patient – usually something minor like a tablet or a syringe. I’m not even talking about patients in critical care – just those recovering in the wards. This means that we often work in shifts attending to our patients with breakfast, lunch, dinner and night watchman duties divided amongst friends and family.

This whole constantly waiting regimen is a particularly Nepali peculiarity and I’ve often wondered if this is a function of our excessive anxiety or our general distrust of hospitals. It’s not like folks in other countries just dump their patients in a hospital, say a prayer, and wish for the best but the orderly fashion in which we tend to handle, organize and take ‘ownership’ of the illness is quite something else.

I initially speculated that it was a cultural thing, distinct to certain demographics with really strong kinship ties but after observing people of every ethnicity, hue, and social strata, it can safely be described as a pan-Nepali thing. For all of us, this waiting and visiting phenomenon has taken on another dimension and evolved over time to become a barometer of relations and close ties between people. Just showing up with juice, biscuits, or fruits in hand in a display of emotional support shows that you care – even though you are helpless with respect to the treatment and well-being of the patient.

For us Nepalis, there is a world of difference between visiting someone in hospital and visiting them at home after they have been discharged. One shows that you care and can be counted upon while the latter basically says that you were on the way to work but thought you would drop by.

There is also no small amount of irony in the hospitals’ dependence on these ‘visitors’ either, who are apparently only there to cover up for the hospital’s personnel shortages – or that’s what the staffs seem to think. It’s not like they will even give you a discount at the end for helping out. But jokes apart, this mentality of asking for everything in installments thereby necessitating a ‘waiter’ is perhaps a result of mutual distrust between hospitals and patients.

I’ve seen arguments in pharmacies where visitors were livid at being asked to buy a few extra medicines and supplies, just in case it was needed. On the flip side of the coin, hospitals often send gullible patients home with medicines, medical aids, and implements that they have no need for – in short, after fleecing them.

The point is that if our hospitals rely on these ‘visitors’ and they are – in most cases – expected to be on standby for small errands, then why can’t the hospitals accommodate them? They will gladly let them sleep in the passageway outside the ICU, in stuffy waiting rooms, in the hallways or even on spare beds meant for patients (I kid you not) but won’t consider a longer-term solution to it. How about accommodating them and charging them for it?  After all, they are usually charged for everything short of the air they breathe inside the hospitals, then why not this?

Nowadays though, there are a new breed of ‘star hospitals’ that have liaisons and customer service reps to make the process of hospitalization and treatment hassle free. It says a lot about our system that this particular aspect of medical care can be leveraged to make it a USP for some hospitals. What they do is take care of the running around and coordination for you and help to lighten the burden of treatment – along with your wallet. But for the most part, even the expensive private hospitals here expect you to play this waiting game thereby ensuring that they test not only your patients but also your patience.

Cabinet approves 700 ropanis of land at Duwakot for Bir Hospital

KATHMANDU, July 23: The government has decided to provide 700 ropanis of land to Bir Hospital, the country's oldest hospital,... Read More...

Hearing on case against Home Minister Lamichhane continues
36 minutes ago

Four arrested with illegal drugs in Janakpur
53 minutes ago