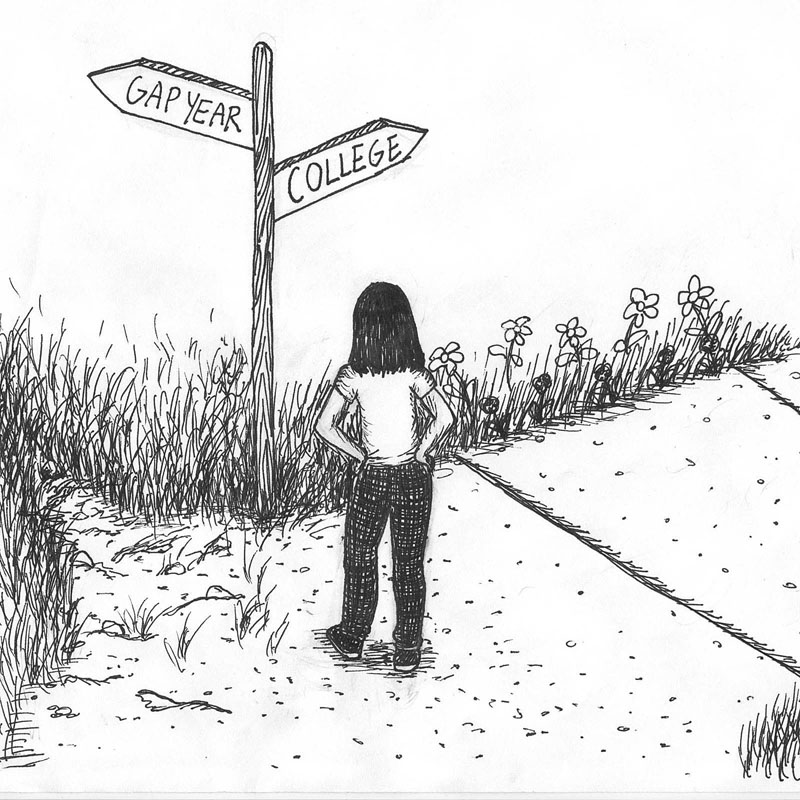 To take or not to take

Piyush is set to start working for JP Morgan Chase but is taking a two month gap to rejuvenate first. He believes a gap year is imperative because it gives you the chance to rediscover yourself.

After twelve years of continuous studying, even while doing my A-levels, I would have days where I really wished I didn’t have to go to school. However, with the gap year, there were days when I missed going to school and studying, which later helped me focus more in college. I used to go to my dad’s office and help him out whenever I could, picking up some soft skills I would need to join the workforce later on. I also learnt to cook, wash clothes, and other household chores like cleaning, and mopping so that I would be able to live comfortably wherever I went. This is the only free time you have, so you can explore and do anything you want without anyone nagging you about anything else.

You can travel without the fear of missing classes. I had to cancel so many trips while studying because there weren’t enough holidays. When you have finished the 12th grade you are even mature enough to travel alone. Solo travel, I think, is something a person should experience early on before going off to college. This also gives you time to prepare for things you didn’t do before. In my case, I discovered the joy of reading as I was too busy with course books to bother with fiction. I also got time to prepare for my SAT’s and I was about to give it all of my attention.

I think there is more to life than just formal education. There should be no need to rush and finish it without stopping to gain other experiences that will make you excel in the field you choose. I think it is necessary in life to stop and look back on what you have done so far. It is important to reflect on what your likes and dislikes rather than just blindly following a set course. I feel like a gap year, at the end, helps you in some way or the other. It may be in the form of you discovering a new subject of interest, on how to deal with different kinds of people because of an internship, or even how to sustain yourself when you aren’t living with your parents. The only thing you need is to be disciplined when there is no one to tell you what you should be doing.

Priyasha has finished her Masters and is now traveling while looking for a job. She believes you shouldn’t take a gap year unless you aren’t clear about your goals.

There aren’t many good jobs you can get right out of high school. It is usually short term internships, the experience of which doesn’t always justify the gap period. I also think when you break the ‘studying’ momentum it is hard to go back to it. For me, personally, I wanted to get my studies over with as soon as I could. I didn’t take a gap year before my bachelors and I didn’t take one after it either.

Gap years are mostly for people who don’t know what they want to do with their lives at that point of time. They don’t have a clear goal of who they want to be. I knew what I wanted to study so I didn’t let anything else influence my decision. Gap years have become a sort of trend these days, where it is cool to take a year off and do other things. All colleges ask you to explain in detail what you did during your gap year. This puts you at a disadvantage because what you deem to be important work and what colleges and universities recognize as important can vary greatly.

I completed my bachelors from Nepal and then went to Bangkok for my master’s degree. College timings are far less demanding that school timings. Mine was from seven to twelve which meant I had enough time to do everything else that I wanted to. I was taking guitar lessons in the evenings and helped out at my mother’s school too. It was during this time that I learnt baking and all the other skills I might need later in life. Most people want to travel and discover themselves during the gap year, but afterwards they realize that they either don’t have the funds to sustain a long trip, or that apart from traveling they have nothing planned out. Now that I’m done with my studies, I’m looking for a job and traveling as well. I had some money saved up from when I was studying which I am using and have extensively traveled in Thailand and have been to Cambodia as well. My parents don’t worry about me either because they know I’m old enough to take care of myself.

You don’t miss out on much when you don’t take a gap year. Instead it’s fun to watch your friends still studying after you have graduated.

Iran’s supreme leader: No talks with the US at any level

TEHRAN, IRAN, Sept 17:  Iran’s supreme leader announced on Tuesday that “there will be no talks with the U.S. at any... Read More...

KATHMANDU, July 18: A meeting of the ruling coalition on Sunday decided to block Parliament from holding discussions on the... Read More...