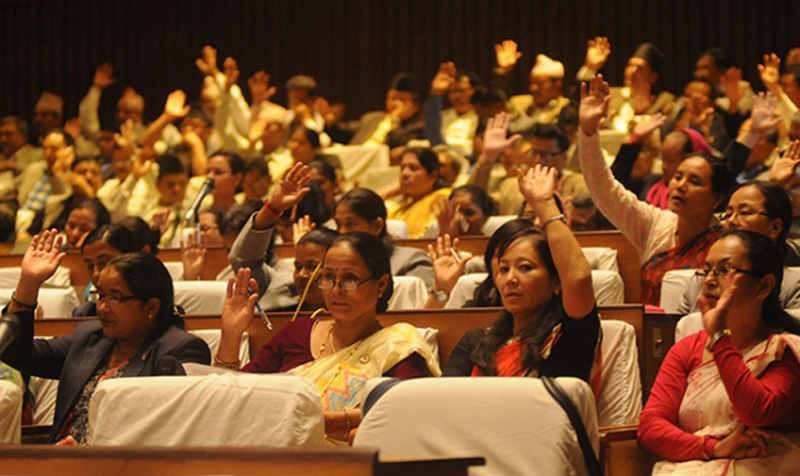 Nepal is at a crucial juncture of institutionalizing democracy and democratic practices. As an emerging democracy we must establish popular trust in the practice of democracy and this practice begins with elections as its foundation. The Election Commission has proposed some essential reforms in the Draft Bills introduced in the parliament so that elections and practice of democracy do not become a charade. On the eve of the introduction of the election-related Draft Bills in parliament, this article is a reminder to the parliamentarians and a clarion call as these electoral reforms are an investment in democracy.

The single-most important reason why leaving election dates to government is not desirable is that the periodicity of elections might become hostage to the sweet will of a ruling party. The ruling dispensation will have a political advantage that is against the principle of level playing field. The ruling party may choose timings that benefit it politically. So we cannot afford to allow the periodicity of elections to be held hostage to political interests.

This is why everywhere in South Asia the Election Commission determines the election dates. An alternative can be fixed dates of election as in the US, and also the UK since last election. In India, its election commission does not even consult the government while fixing the date of an election and the government is duty-bound to provide all support to the commission.

The Election Commission of Nepal in any case consults all political parties, the bureaucracy that conducts the election, the government that provides the security forces as well as all the stakeholders including voters and the civil society.

This predictability of election schedule is also important for the Election Commission because uncertainty of dates hinders planning and preparation and ultimately the quality of elections.

Financial discipline
It is important that the political parties that aspire to lead the nation set examples of financial accountability and transparency so the faith of people in the parties is established. To ensure this, the Election Commission, in its Political Party Relations Draft Bill, has proposed that “the parties that do not submit annual audit reports may cease to be registered with the Election Commission”. The current Political Party Relation Act, 2058 BS, provides that parties which do not submit their audit report annually can be fined hundred rupees. The current Election Commission Act, 2064 BS, on the other hand, provides for de-registration of political parties which do not submit annual audit report for three consecutive years.

In the experience of the Commission, the ridiculously small fine of one hundred rupees does not deter the parties from violating fiscal compliance requirements. Instead, on many occasions, it validates their non-compliance for three years! Even the naming and shaming carried out by the media does not help. This is why the Election Commission in its Political Party Relations Draft Bill has introduced new reform by changing the audit report submission to an ‘annual requirement’. In some cases, deregistration for one-year default may sound too harsh and unreasonable because the idea, basically, is compliance. However, as the provision in the Draft Bill says ‘EC… may deregister’, if there are valid reasons for delay in submission, EC may take them into account. As a routine procedure, the Commission repeatedly sends reminders, asks for explanation, sends show cause notices and publishes such notices in daily newspapers.

As an option, a calibrated approach of fines can be followed, for example, a fine of one lakh rupees for the first year of non-compliance, ten lakh for the second year of non-compliance and third year of non-compliance should warrant de-registration.
As for the argument that Constitution protects parties from action against them for violating financial accountability requirements, the Constitution is not against action against parties. Granted that the Constitution ensures the freedom to organize as parties, political parties’ right to publicity and protects democracy by ruling out possibility of a single-party democracy, but it does not encourage violation of rules and regulations and in no way postulates the possibility of perpetual existence of a rogue political party! Nowhere does the Constitution prohibit de-registration of parties that do not observe fiscal discipline.

Why public funding
According to the Political Party Relation Draft Bill, democracy and elections cannot be held without money but dependence on private donors makes political parties beholden. If political finance regulations are not in place, private donors, corporates, real estate mafia, drug mafia, even international funders could run proxy government, mobilize black money and give rise to a culture of crony capitalism, ultimately destroying the already shaky economy of Nepal.

Unbridled use of money in politics also creates indirect barriers to a participatory democracy. Besides excluding a great majority of population from the opportunity of participating in the election as candidates, it allows them to be exploited as vote banks.

This is why a level playing field must be ensured through political finance regulations to remove the divide between rich and poor. Such a divide is against the principle of equity and natural justice and certainly does not constitute a participatory election. It also raises questions on election legitimacy due to lack of opportunity for participation.

This is why the Political Parties Draft Act to be introduced in the parliament suggests that the State itself provide funding and gradually ban private collection. According to the International Institute of Democracy and Electoral Assistance (IDEA), 70 percent countries in the world follow this practice.

Women’s participation
Another important reform is in the Local Level Election Procedure Act Draft Bill and concerns gender equity. The Election Commission of Nepal has always believed that participation of women is vital and the best place to start is at the local level. If women’s leadership at local level achieves a critical mass, the pool of women in politics will be gradually groomed for national level leadership and after a few election cycles, a day will come where women will not require quotas. Therefore, the Local Level Election Procedure Draft Bill prepared by the Commission proposes that political parties must field 50 percent women candidates and also provides that candidate for either Chair/Deputy Chair of Gaunpalika or Head/Deputy Head of Nagarpalika must be a woman.

Nationals abroad
The Election Commission is concerned about the voting rights of citizens living and working abroad, especially those working in the Gulf. Therefore the Commission has proposed online registration and voting by those living abroad. It may not be implemented immediately due to technical reasons, but it is important that we create a space for the possibility.

Draft legislation
The Election Commission of Nepal, traditionally, has been entrusted with the function of drafting election related Bills. It is assigned to carry out this duty because the Commission through its own experience of excelling in successive elections is an institution capable of carrying out this responsibility with the greatest legitimacy. The five Draft Bills prepared by the Election Commission have passed through a rigorous process of stakeholder consultations, primarily with the political parties as well as various sections of the civil society for the past one and half years. The Election Commission has a high-level Legal Drafting Committee chaired by a Commissioner, the members of which include Secretaries of PMO, Home, Law and other invitee experts who were involved in all the discussions. Therefore, any dilution or mutilation of the Draft Bills at bureaucratic level, before being presented to the Parliament, is neither understandable nor acceptable.

The writer is Election Commissioner of Nepal

Bringing back the basics

A common belief among most Nepalis is that when young people leave the country to pursue their dreams, most of... Read More...

The basics of event planning

Memorable parties or successful events do not just happen. It takes a lot of preparation, planning, and great teamwork to... Read More...

If you believe this, then you will probably feel negatively toward yourself, and possibly even feel shame for who you... Read More...