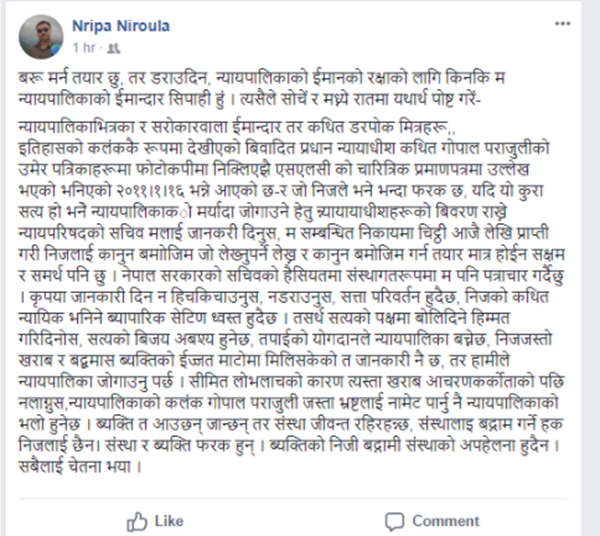 KATHMANDU, March 23: It has been revealed that Judicial Council Secretary Nripadhwaj Niraula, who handed a retirement letter to former Chief Justice Parajuli, had posted status on his Facebook account that subsequently forced Parajuli to step down.

The mysterious status was found posted on Niraula’s Facebook account which subsequently forced CJ Parajuli to step down after 17 days.

Spitting venom against former Chief Justice Parajuli, Niraula had stated that he is able and even ready to sacrifice his life to safeguard the Judiciary from a fraudulent person like Parajuli.

According to media, the status had been posted on February 13.

With the status posted on Facebook, the resentment against Parajuli was smoldering among the staffers at the Judiciary. However, Niraula deactivated his status at the suggestion of his colleagues.

Niraula was the registrar of the Supreme Court when Sushila Karki was the Chief Justice. After Gopal Parajuli assumed office as Chief Justice, he had transferred Niraula to the Commission for Investigation on Enforced Disappeared Persons as secretary and appointed Nahakul Subedi to his post, instead. He was secretary at the Judicial Council then.

With his transfer, Niraula, who claims to be senior to Subedi, was dissatisfied with Parajuli.

Parajuli had promoted Subedi, distant son-in-law by relation, to the post of registrar and then as senior-most Justice after six months, further adding fuel to Niraula’s feud.

Parajuli had inducted Niraula as the secretary of the Judicial Council two months ago.

It is noted that Niraula had written a letter to Parajuli stating that he had crossed the age limit of 65 on August 5, 2017 as per the record of his credentials.

Parajuli had received the letter of retirement at a time when he had reached Sheetal Niwas to administer oath of office and secrecy to President Bidya Devi Bhandari for the second term (March 14). Parajuli had stepped down the very next day.

KATHMANDU, June 29: On the evening of June 20, a few locals of Satdobato, Lalitpur witnessed a shocking incident which left... Read More...