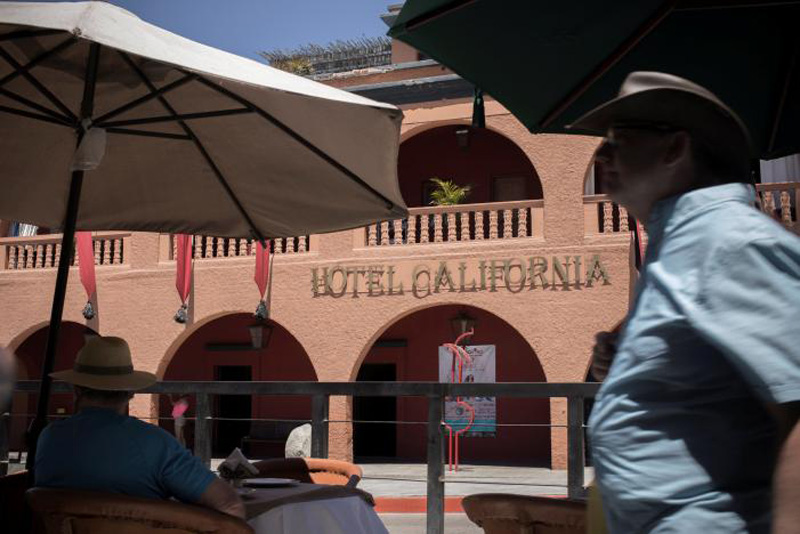 The Eagles have filed a lawsuit accusing the owners of a Mexico hotel of using the name "Hotel California," arguably the band's most famous song, without permission.

In a complaint filed late Monday, the Eagles said owners of the 11-room Todos Santos hotel in Baja California Sur "actively encourage" guests to believe the hotel is associated with the band, in order to sell t-shirts and other merchandise, and make guests feel welcome.

This allegedly included piping "Hotel California" and other Eagles songs through the hotel sound system, and selling t-shirts in that refer to the hotel as "legendary," resulting in apparent confusion among many guests who posted online reviews.

"Defendants lead U.S. consumers to believe that the Todos Santos Hotel is associated with the Eagles and, among other things, served as the inspiration for the lyrics in 'Hotel California,' which is false," the complaint said.

The lawsuit filed in Los Angeles federal court seeks a variety of damages and a halt to any infringement.

Neither the hotel nor the lawyer who filed its trademark application immediately responded on Tuesday to requests for comment.

The Todos Santos hotel was named Hotel California when it opened in 1950, but went through a series of name changes before a Canadian couple, John and Debbie Stewart, bought it in 2001, and according to the Eagles began using the original name in marketing.

"Hotel California" is the title track from the 1976 Eagles album of the same name, and won the 1977 Grammy award for record of the year.

It is known for its long guitar outro featuring Don Felder and Joe Walsh, and complex lyrics sung by Don Henley.

In an interview with CBS News last year, Henley said the song is about "a journey from innocence to experience. It's not really about California; it's about America."

LAS VEGAS, Oct 2: A gunman perched on the 32nd floor of a Las Vegas hotel-casino unleashed a hail of... Read More...

One found dead in mysterious condition in hotel room

KHAJURA (Banke), Sept 2: A man was found dead in mysterious condition in Hotel Poplife in Kohalpur of Banke. ... Read More...

IN PICS: Haphazard disposal of used masks, gloves likely to emerge as major health and environment risk
2 hours ago