The cult of small 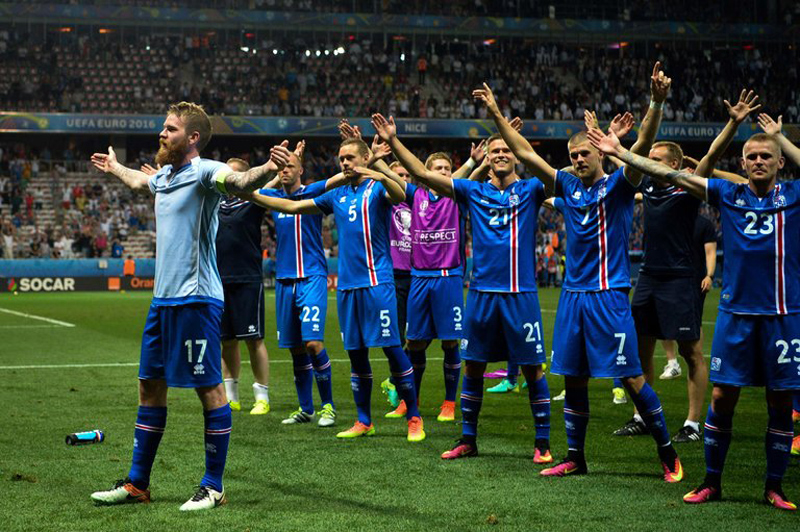 When asked about the ‘key’ to Iceland team’s success, players attributed it to special bonding between them
The first time I remember hearing about Iceland, in a slightly detailed manner, was during the 2007-08 global economic crisis. If my memory serves me right, a documentary was explaining the collapse of big markets and how it had all started with troubled Icelandic banks that had grown too big, so big their size was almost ten times the size of the country’s economy. Not being a student of economics, I did not make much of the information.

Now I know the country for yet another reason: its footballing prowess. The recent success of Iceland in Euro Cup took many by surprise, especially the fence sitters who had no allegiance to one particular team and who simply fell in love with Iceland.

Why the fascination? One factor was the country’s size, its population to be precise. We fell in love with the team every time the commentator reminded us that half the country could be inside the stadium. Of course, we also adored their “Viking Claps” that left even rival fans totally amazed.

The team got a huge reception when they returned to their capital city, Reykjavik. When asked about the ‘key’ to their success, they attributed it to the country’s small size and how that led to special bonding and a sense of teamwork and camaraderie. The supposedly superior teams had players who hardly knew each other, whereas members of Iceland team knew one another like members of the same family. Well, almost. Being small was not just beautiful but successful too.

So what about the size then?
Well, we might have a population that is significantly bigger than that of Iceland but we are a small country in every sense of the word. Geographically, we are boxed inside a rectangle that runs for nearly 1,000 km, east to west, in length; and some 300 km, north to south, in breadth. Given this small size, a person in Kathmandu could easily crisscross the country every day: attend a 45-minute meeting in Mahendranagar and get back home for dinner in a fast train.

It’s amazing how when two Nepalis meet, the conversation invariably ends with, “Oh okay, so you know this person, right? It’s a small world.” A bit too much generalization there but neither is it a big exaggeration.

Iceland is a country that is ‘open, easy-going and blissfully innocent’. Not many countries in the world are likely to get that sort of introduction, right?
Most other countries are too big and hence generalization becomes difficult, and perhaps also inappropriate. We in Nepal get introduced as a country of “smiling and friendly people” who are also “hard working”, “hospitable” and “respectful”. King Beckham said pretty much the same thing; so did Prince Harry.

So why can’t we also have Icelandic success?
We live in a country where three degrees of separation would suffice to know everyone. This ought to be our strength. And people do find that connection. So how is it then that our size has been a bane than a boon?

Small countries are limited by lack of resources. But we are not one of the sub-Saharan countries where nothing grows. Yet we are poor. The three degrees of separation perhaps has the entirely opposite effect here. We know who exactly is running the black market.

We know the thugs but at the same time we know that they also know those in the agency that is supposed to check their illegal activities, as well as the lawmakers and the law enforcers. So perhaps we don’t do anything because nearly everyone knows everybody.

The same applies to our television prime-time talk shows, with interviewers and hosts knowing each other all too well. Although they have fancy names like ‘Fireside’ or ‘Tough Talk’, seldom do we see the guests grilled. Maybe the thinking is: Why make enemies in such a closed society?

It also explains the syndicates. We all know of the bus syndicates that have monopoly over transportation, for instance on Rukum-Dang highway or even in the city of Pokhara.

How is this possible in a free-market economy?

The enforcers supposed to protect new entrants in the market know that the handful of people running those syndicates know the political bigwigs and therefore any action against the syndicates could be taken as personal affront by these political leaders. Else,

why would Dr KC have had to resort to fast-unto-death against one Lokman Singh Karki?

I was at a seminar recently, accompanying someone who was scheduled to deliver a formal speech. Upon our arrival we found that not many were left in the audience.  The person with me was smart enough to quickly assess the situation: “I hate talking to big crowds. The message gets lost. I rather prefer small packages. Small is beautiful.”

IFC to invest another $7.3 million to finance small businesses

KATHMANDU, June 12: International Financial Corporation (IFC), a member of the World Bank Group, has said that it was investing US$... Read More...

KATHMANDU, Feb 24: Deputy Prime Minister and Minister for Home Affairs Bimalendra Nidhi has said that the government must give due... Read More...