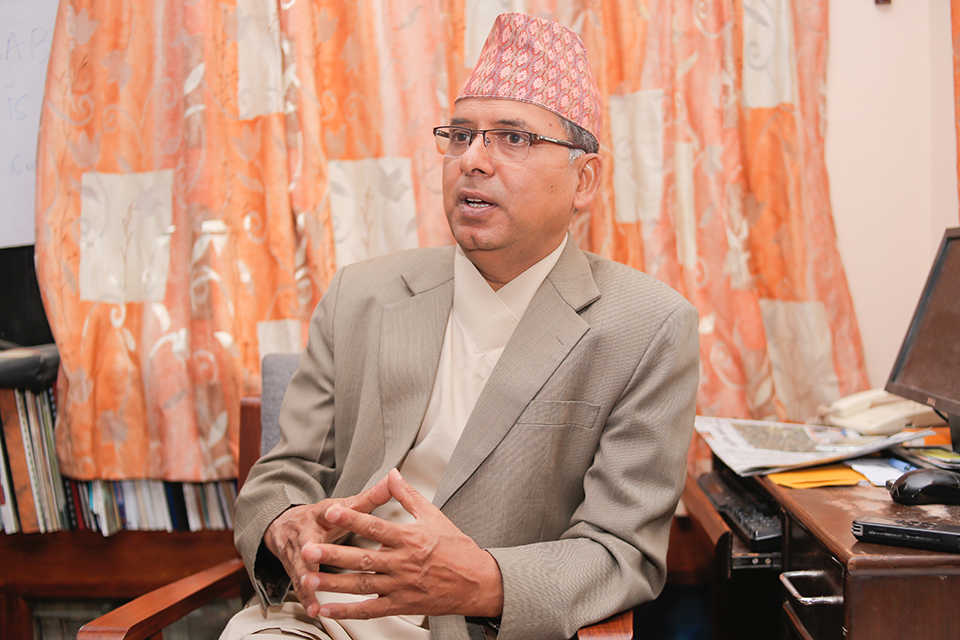 Eighteen months after the promulgation of the new constitution in September 2015, political parties have still not been able to resolve key issues. The attempt to amend the constitution for the second time has failed and the deadlock between three major forces and Madheshi parties has put May 14 local election in jeopardy. Is Nepal’s constitution fundamentally flawed and in need of repeated amendments? How do we see the third amendment bill registered in the parliament on Tuesday? What is the way out of this impasse? Constitutional expert and Dean of Kathmandu University School of Law, Bipin Adhikari, shared his insights with Mahabir Paudyal and Ashok Dahal.

        Both the amendment bills (the one that was withdrawn and the one registered on Tuesday) have been brought to prevent people from giving their verdict on the constitution.
    The new amendment proposal will disenfranchise around 1,488 members of local bodies of their right to choose National Assembly members.
    The amendment proposal seems like a coordinated conspiracy to thwart the emergence of competent leaders from the local base.
    Any boundary issue should be jointly resolved by the provincial and federal parliaments.
    There seems to be a plot to make this constitution redundant before people even realize what it has to offer to them.

There have been demands for the constitution’s wholesale amendment since the time of its promulgation in 2015. Is the new constitution so flawed?

In some places, our constitution is clumsy as it is heavily worded and there are many political statements. But, fundamentally, this constitution is a good one. It has brought a paradigm shift in Nepali politics on four fronts. One, the constitution has a clear roadmap to ensure inclusion.

Inclusion has been enshrined as a fundamental right. A Nepali can file a writ at the court if the state fails to live up to this promise. Second, the constitution has institutionalized federalism as a tool for self and shared rule. It has provided for three levels of government. The third tier, which is local government and which has direct bearing on lives of people at the grassroots, has been given special powers and functions.

Third, this constitution has created institutions like Madheshi, Women, Muslim and Janajati commissions so that the marginalized communities can have their voices heard and to ensure their meaningful participation in politics. Finally, we have adopted the most desirable electoral system. The first-past-the-post system allows the political parties to push their ideologies, while proportional representation honors ethnic and regional dimensions of representation. This is why I say this constitution represents a paradigm shift in our politics.

If it is so good, how do we make sense of persistent voices of protests against it?

Two factors have contributed to this. Those who have seen, or have been made to see, only flaws in the constitution have either not understood the merits of this constitution or they are pretending they do not understand. They seem unaware of how the country will make a political and economic leap when the three levels of elections take place and local, provincial and federal governments start functioning. Or they have been misled. And then there is a deliberate attempt to turn this country into a collection of ethnic camps (jaatiya sibir). These people see everything through ethnic lens. If you read this constitution through ethnic lens you may not find anything worthwhile for you because the constitution does not create ethnic base (jaatiya purbadhhar) for every single ethnic community. Some forces want Nepal to be perennially instable. These elements are speaking against implementation of this constitution. In terms of its content, there is little to criticize in this constitution.

The government has withdrawn the second constitution amendment bill and registered a new one in the parliament. How are we to understand this?

In a democracy it is abnormal for political forces that promulgate the constitution to keep amending it without taking people’s feedback even once. Normally, framers of a constitution take the document to the people for their approval. They do so by holding elections as per the provisions of the constitution. Supporters of constitution persuade voters by defending the constitution. The dissenting forces point to its flaws, if any, to bring people to their side. But this is not happening in Nepal.

Election provides an opportunity for people to show whether they accept or reject the constitution. Those who are not satisfied with it can ask people to vote in their favor so that they can remove the supposed flaws in the constitution when they are elected. If people are not happy with the constitution, they will vote for dissenting forces.

Instead of letting people decide, the focus of our parties has been to amend the constitution.  Both the amendment bills (the one that was withdrawn and the one registered on Tuesday) have been brought to deprive people from giving their verdict on the constitution. There is a visible attempt to entrap the country’s political leadership, by both domestic and foreign elements. This is wrong. The constitution should be amended only through a fresh mandate. Yes, the parties can question some provisions but they must take people’s mandate before seeking amendments. Today there is an attempt to completely ignore people’s aspirations.

There were problems in the second amendment bill as well. But the third bill is even more problematic. The constitution has provided for three levels of government. And the local government had been empowered because it is the one directly linked with the grassroots. As such the constitution had granted powers to the local level and made it an integral part of National Assembly. As per the constitution, the chief and deputy chief of local bodies become members of Electoral College that elects National Assembly, thereby making them custodians of the federal system. The new amendment proposal will disenfranchise around 1,488 such members of their right to choose National Assembly members. This is a direct attack on local government.
The local level can play an instrumental role in the development of local leadership. The leaders groomed and elected at local level have the potential to later assume leadership at provincial and federal levels. The amendment proposal seems like a coordinated conspiracy to thwart the emergence of competent leaders from the local base. Those at the negotiating table with the government seem to be guided by the fear that the competent leaders who emerge from the local level may make them irrelevant. They are trying to retain their space in provincial politics by decimating local levels. And they are doing this by putting the future of grassroots democracy in jeopardy. This is a big threat to our local government system. People should see through this design.

New amendment proposal states that federal parliament may alter boundary of provinces even without the consent of respective province. What do you make of this?

You can always find an international practice that backs your point of view. But each country acts as per its specific needs. The fundamental tenet of a federal system is that each unit of federal government exercises some independent powers and some shared powers. The power to amend the constitution falls under shared powers, which means both provincial and federal parliaments should have their say in such amendments.  Reserving this right exclusively for the federal parliament violates this principle. You cannot take one province into confidence and ignore the aspirations of people of other provinces, for all provinces are equal stakeholders in federalism.
Shared powers of provinces and federal parliament should be decisive in altering provincial boundaries. What is objectionable about the current proposal is the provision that two-thirds majority of federal parliament can alter provincial boundaries if provincial assemblies have not been formed. The intention seems to be to tamper with provincial boundaries to suit certain interests.
The most ridiculous point in the new amendment proposal is the provision of a permanent federal commission to resolve boundary issues. The only thing that this will do is keep the old seed of discord alive in perpetuity by changing provincial boundaries without getting people’s feedback on this vital issue. Any boundary issue should be jointly resolved by the provincial and federal parliaments, and as per Article 274 of the constitution. A permanent commission is unnecessary.

The general practice is to hold national election first. First the federal parliament election is held and then it finalizes legislation for provinces and local units. Then the provincial election is held followed by local election. This should have been the case in normal times. But these are not normal times. We must hold all three sets of elections before January, 2018. So where you start is a secondary issue. This is no time to debate which election should take first. We need to hold local election and then move towards elections of provincial and federal parliaments. Madheshi forces insist that local levels should remain under provinces. But this is not what the constitution has envisioned. It has envisaged three levels of government, each with defined powers and responsibilities. We should also understand that local units have been given requisite autonomy and powers so as to empower all local stakeholders including Janajatis, women, Madheshis and Dalits.

Let us assume local election is successfully held but the country is not able to hold the other two elections on time. Will the local units function then?

They will, for sure. But for this the current parliament needs to enact legislation to make them functional, in case federal election cannot be held. Elections should not be stopped under any pretext.  Let the people choose their future leaders. Madheshis will decide whom to elect as their leaders for the future. So will Janajatis and other groups.

What in your view is the biggest challenge for the implementation of the new constitution?
The biggest threat to constitution implementation is this tendency to take vital decisions without letting people have their say on crucial political and constitutional issues. Proxy forces take decision in the name of people without consulting them. This tendency is dangerous. An overwhelming majority of people welcome this constitution and they want to participate in the political process as per its provisions. Let local election happen and let the people experience how the constitution has empowered them. There seems to be a plot to make this constitution redundant before people even realize what it has to offer to them. Any constitutional issue can be reviewed or changed, but only by elected provincial and federal parliaments. The 744 local executives which are going to be formed after May 14 election will change the political landscape of the country because this will bring to power Dalits, Janajatis, women and Madheshis.

But there has been a tendency in Nepal since the 1990 democratic changes of trying to push through with political agendas without people’s consent. An extra-constitutional force is created to derail the democratic and political process. The big challenge is to overcome this tendency. The first condition for effective implementation of the new constitution is holding all three elections by the January 2018 deadline.

KATHMANDU, Jan 29: The United Democratic Madhesi Front (UDMF) has decided to launch another round of agitation from February 12,... Read More...