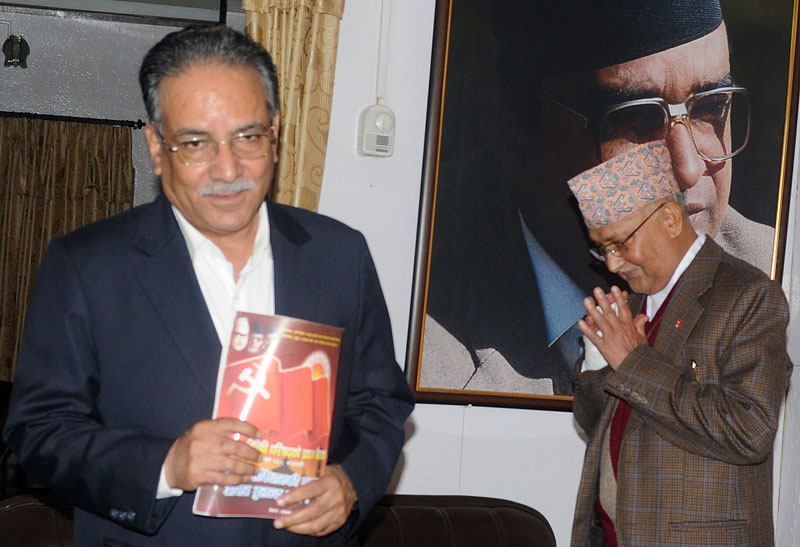 The bonhomie between Maoist chief Puspa Kamal Dahal ‘Prachanda’ and CPN-UML Vice-President Bamdev Gautam goes back around 15 years, when Gautam frequented the Maoist hideouts in the Mid-west hills to meet Prachanda. It is said that the bond between them is rooted in their shared views on ‘nationalism’ and on how they view our neighbors, India and China. The cordiality between them has survived the many ups and downs in relations between UML and Maoist party. Their closeness was once again evident in the first week of May when Gautam played a key role to ward-off the imminent fall of KP Sharma Oli-led coalition government, as Prachanda threatened to withdraw his support. It was Gautam who convinced Prachanda to postpone the move. In a recent interview, Gautam has divulged two arguments he employed to persuade Prachanda to make a U-turn: 1) The communists parties had no option but to rely on each other, and 2) The two parties share the same vote-banks.

Gautam seemed to be contemplating forthcoming elections for local bodies as well as polls for provincial assemblies and federal parliament, which, as per the constitution, are to be completed by January 21st, 2018. The Oli government has declared that polls for local bodies will be conducted by mid-December, 2016. The last local polls for Village Development Committees (VDCs) and District Development Committees (DDCs) were held in May 1997, when Gautam was Deputy Prime Minister also holding Home Ministry portfolio in a Rastriya Prajatantra Party-led coalition government.

The polls were held under direct supervision of Chief District Officers (CDOs) who fall under the purview of the Home Ministry. Scores of CDOs were transferred and replaced by UML supporters and the police administration was thoroughly overhauled from the centre to the local level for the purpose of local elections. Numerous fraudulent tricks were employed under the aegis of local administration to get UML candidates elected in local bodies. The Election Commission personnel were reduced to mute spectators who could only sign and distribute election certificates. The key role of Gautam in last local polls has not been forgotten by Nepali Congress as more than 80 percent of results went in favor of UML.

With this background, Gautam seems to have convinced Prachanda not to fall for the greed of becoming prime minister with the help of Nepali Congress for a short period. Why, Prachanda could replace Prime Minister Oli after the approval of annual budget, but without breaking the present communist coalition! This was the much-hyped ‘gentleman’s agreement’ between Oli and Prachanda, brokered by Gautam. The two communist parties, it appears, have convinced themselves that this is the best way to ensure communist victories in all three polls to be held within a period of 20 months. More or less similar strategy was adopted by CPI (Marxist) in West Bengal for decades. Both UML and Maoists will have closely evaluated the results of the second Constituent Assembly polls: CPN-UML got 24 percent of national votes while UCPN (Maoist) 15 percent; in total, the joint communist forces garnered almost 45 percent of the votes in the second CA polls. Meanwhile, Nepali Congress, as a largest party in the parliament, had received 25 percent of votes.

However, the polls for local bodies in 2016 would be entirely different. Unlike the constitution of 1990, the Constitution of Nepal 2015 has provided solid constitutional status to local government as one of the three tiers of government: federal (central or national), provincial and local. Timely election is guaranteed with the provision of local elections in each five-year period. The Election Commission has been given full authority to conduct, supervise, direct and control election of members to the local bodies (Article 246). So the Election Commission will fix the poll-date for local bodies and appoint personnel to each polling centers. It would be the duty of district administration and security offices to maintain law and order, at the request of the Election Commission.
The Nepali Congress and the Madheshi parties perhaps realize that if they go for local polls, they may face a formidable joint communist force mobilized by a communist government. The government has already instituted a commission to determine the number and areas of local level units. The commission has to submit its report by mid-March 2017. The transitional provisions made in the Article 303 of the new constitution clearly says that elected local bodies shall continue to hold office until next election to the local level is held in accordance with the constitutionally determined number and areas of local level units.

Although the official decision of the Congress is yet to come, some of its leaders have been making contradictory remarks on whether to hold polls before or after the determination of number or areas of local bodies. The NC, being a crusader for democratic values and norms for almost seven decades, cannot continue to shy away from the local polls in one pretext or the other. It has the credit of pioneering the local bodies’ Acts in 1991, holding polls for local bodies in 1992 and enacting Local Governance Act in 1999.
As for the Madheshi parties, some of its top leaders have started saying that all they want are amendments in the constitution, not it’s complete rewriting. This should be a welcome departure for the settlement of outstanding issues. After the first amendment of the constitution, two major issues remain to be settled. One is representation based on the size of population of provinces and the other is redrawing of provincial borders. While the representation issue could be solved amicably, the second one of redrawing of borders could be counterproductive, even for Tarai-Madhesh. In any case, these issues cannot be held as excuses for the Madheshi parties not to participate in local elections.

The absence of elected representatives at local level has tremendously affected delivery of services of all kinds, promoted unaccountability and led to rampant misuse of taxpayer money. If we have elected representatives at the local level, these issues will sort themselves out in due course of time. Whatever the motive of political parties, local elections will also be a milestone in the process of implementation of the new constitution.