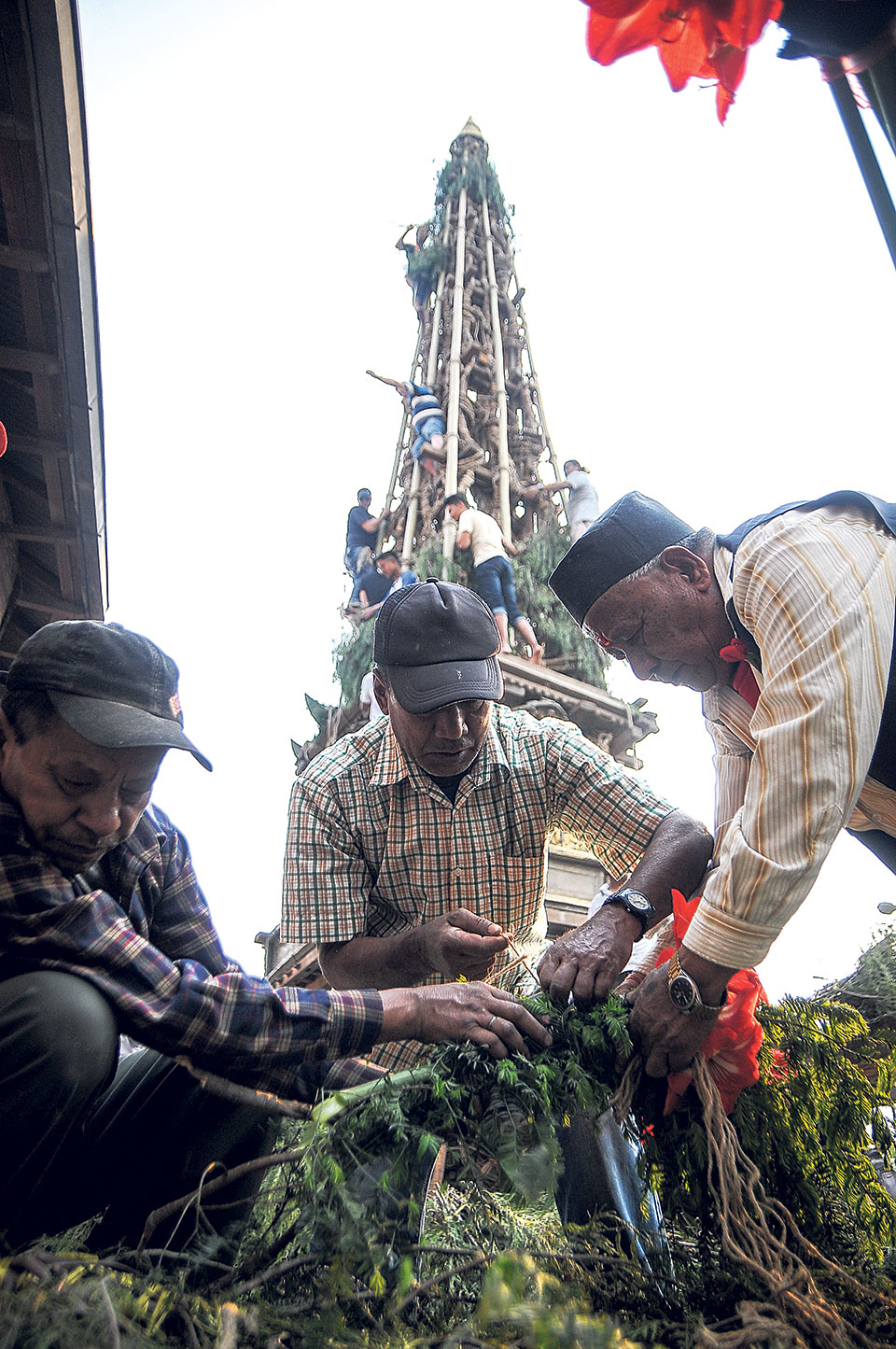 Back when he was 12, Ratna Maharjan remembers smugly looking down the Seto Machindranath chariot’s nine-storey tower structure, hoping against hope that somebody down below had caught him in the act and was admiring his courage.

Today, as one of the elders though, he was the one keeping a strict eye on the group of boys playing around the various parts of the chariot as it stood resting near the Hanuman Dokha square earlier this week. He says it’s because he understands the temptation but he doesn’t want anybody getting hurt. So he doesn’t forbid the boys from hanging about the lower structures of the chariot. As far as he is concerned, the glee on their faces is all part of the rath jatra.

Apparently, even his colleagues at the Danish Embassy feel a sense of anticipation during this time of the year. “Weeks prior to the procession, they tell me, ‘Oh, you are going to be busy now that the Seto Machindranath jatra is coming up,” shares Ratna. By now, it’s become an annual ritual anyway. He takes nearly a week-long holiday from his office and, because of its cultural importance to his family, they too readily comply.

In fact, his leadership in the procession and celebration has become more crucial than ever. Starting from the days of Pratap Malla, this rath jatra used to be a communal effort.  Certain Newar families from Kathmandu used to take upon different responsibilities in building the chariot. However, over the decades, interest among those families has diminished.

Ratna shares, “Even right now, our guthi has around 80 people registered to help with the procession but, for the last couple of years, we consider ourselves lucky if we can get 20-25 people to come together to set it all up.”

How did the people leave? According to Ratna, they just stopped showing up. He even gives the example of his own son who is a civil engineer but can’t help out because he doesn’t have the time.

But still Ratna believes he and his geriatric father, who also insists on helping, have learned a couple of tricks to rustle up volunteers to build the chariot. The couple of youngsters from their late teens up to mid-twenties who one could spot assisting on location this year too are either from his neighborhood or his nephews.

“They help out because they are then allowed to sit on the chariot during the procession,” equips Ratna, laughing, “I knew once I gave them a taste of how it feels to be in the center leading the way amidst a crowd of thousands, they would come back.”

Bikesh Maharjan, 26, cheekily neither confirms nor denies this. He insists all this is also an incredibly fascinating part of his community’s culture, partly because he has witnessed the faith his people have on its importance.

He talks of the year when the chariot caught fire and the other instance when it toppled at Ratna Park, both of which also happened to be the year of the royal massacre and the end of Gyanendra Shah’s rein respectively.

“But nobody on the chariot has ever been harmed,” he explains because this deity is believed to be a beacon of peace and unity. So does he fully believe in the religious and the superstitious aspect of the jatra? He says his opinions are divided.

Regardless, he and others like Ashish Maharjan, 18 and Kiran Tamrakar, 21, make up the handful of youngsters who for the last four years have continued to dedicate their time and put in the effort to help their elders assemble the Seto Machindranath chariot. As per the tradition, the Maharjan boys are part of the Newar family who assist with the construction of the chariot and Tamrakar is part of the Munikar clan who help decorate the chariot.

The Maharjans’ work begin from day one. Whether it is bringing all the woodwork and the “heavy” chariot wheels from storage or learning the technicalities of tying the knots of the bet to secure the structure, they assist to the very end of jatra when they also have to dismantle the chariot.

Aashish believes young people like him and Bikesh are definitely not ready to be handed the responsibility just yet. While they are able to follow instructions and assist through all the steps of the preparation, he says he knows better than to underestimate the task at hand.

“There is no instruction manual to building chariots like this,” says Aashish, “The elders rely on their experience and advices from their own forefathers. They seem to notice issues and potential problems with the structure at its mere sight. It’s amazing, if you think about it.” He and Bikesh apparently have only been able to build up the bottom two-storeys of the chariot so far.

Tamrakar too acknowledges that they have a long way to go if they want to carry out this tradition. Just last year, he shares, he was chosen to climb up to the top of the chariot and place decorative flowers there. Since it was considered an honor, he had even enthusiastically accepted the challenge. But halfway through, the task proved to be too difficult.

“I want to see if I can do it this year,” Tamrakar confessed, also adding, “But only Seto Machindranath’s wish to see me up there at the top might help me succeed.”

By now, they have understood that there is a specific way to going about preparing the chariot for the procession. To further demonstrate the point, Ratna introduces Pradip Manandhar, the man responsible for the construction of the chariot. Ratna says his family has taken on this responsibility for the past 30 or so years, ever since he can remember.  It’s he who takes over once the Maharjan boys have finished with the two-storey base because, to quote them, “figuring out the tower structure is too complicated.”

Pradip, on the other hand, doesn’t seem to dwell on the complexity of it all. According to him, erecting the 45-46 feet structure is more like putting together a puzzle piece. “You just need to know which structure goes where,” he says.

Again, there aren’t any written instructions. Pradip saw his father work on it and, by now, he also has his own 15 plus experience helping build the chariot. He says he just relies on his senses to make the right judgment. Needless to say, he has to leave behind his usual carpentry work and just focus on the chariot to finish it within the time limit that is set as per the lunar calendar.

While his father used to work with Satisal wood sourced from the forest itself, today he uses a more accessible type of wood that he assumes the guthi gets from mills. Pradip says he is all for such necessary alterations. He explains that there was a year after the chariot had fallen over in Ratna Park that they had decided to give up building the chariot and instead use a cart for the procession. Apparently, he disliked that more.

“The accident was a sign that we needed to adapt and find new ways to secure the chariot,” states Pradip. So along with Ratna, and with permission from the guthi, they decided to engineer a pulley to tighten the top half of the chariot. “Even if we can’t have it standing at 90 degrees, we need to tighten it throughout the jatra to get it at 80 or 85 degrees,” he says. They even decided to make strategic holes to secure the woodwork frame. “These days, we use as few nails as possible. This way we can also salvage more frames for the next year.”

However, the look of the chariot isn’t up for debate. They want to preserve the authenticity of that so much so they refuse to use ropes to tie and secure the chariot. They still opt for bet, a material that is imported from India and is very hard to procure, to say the least.

Despite all the massive undertakings, Pradip reveals that he is most stressed during the procession. “The houses are bigger than the chariot these days and the spaces are tricky to maneuver. I enjoy the hype of the procession but I’m also slightly tense, praying that there are no mishaps.”

The two to three hours before the procession is scheduled to begin, the elders and the boys who helped build the chariot are left on their own. Throughout the week-long jatra, they use that time to reassess the condition of chariot. However, Ratna says they have never feared being alone during the procession itself. “The appeal of the chariot is still immense,” he says. And indeed, when it’s time to officially start the jatra, an impressive crowd manages to appear, as if out of nowhere. 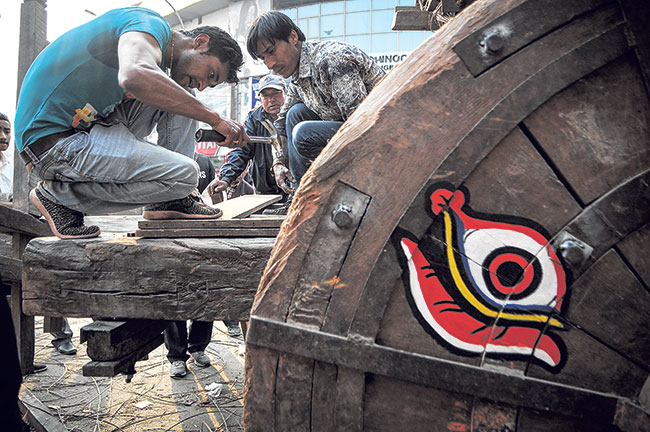 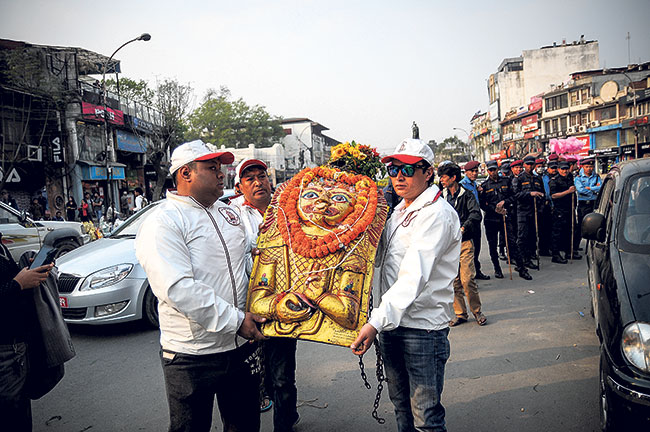 The ‘Male Nude’ art exhibition kicked off on the premises of MCube Gallery, Lalitpur on Friday. The exhibition features works... Read More...

7 reasons why men love being in a relationship

Pretty much every man wants to end up in a relationship. Soon or later, everyone needs to settle down. ... Read More...