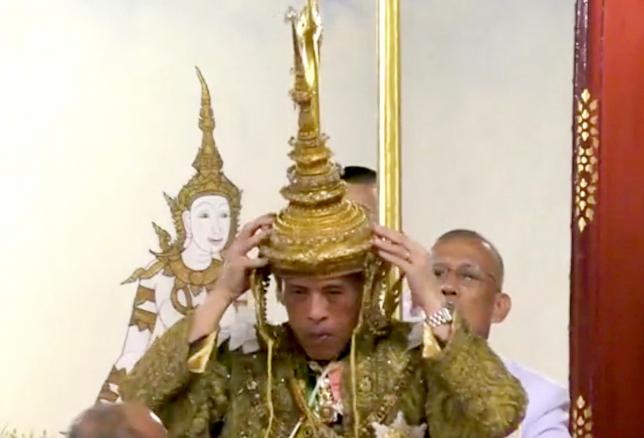 BANGKOK, May 4: Thai King Maha Vajiralongkorn on Saturday completed Buddhist and Brahmin rituals to symbolically transform him into a living god as the Southeast Asian nation crowned its first monarch in nearly seven decades.

The coronation of King Vajiralongkorn, 66, took place inside the Grand Palace throne hall in Bangkok after a period of official mourning for his revered father, King Bhumibol Adulyadej, who died in October 2016 having reigned for 70 years.

The king was joined by new Queen Suthida after a surprise announcement three days before the coronation that the thrice-divorced monarch had married for a fourth time.

His coronation comes amid the uncertainty of an unresolved election battle between the current military junta chief and a "democratic front" trying to push the army out of politics. 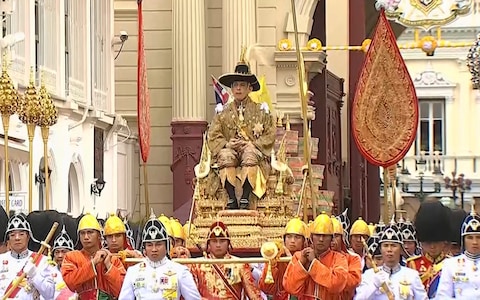 "I shall continue, preserve, and build upon the royal legacy and shall reign with righteousness for the benefit and happiness of the people forever," the king said in his first royal command, while sitting under a nine-tiered umbrella in full royal regalia including a gold-enamelled, diamond-tipped crown.

Traditionally uttered after a king is crowned, the king's first command serves to capture the essence of his reign. The king's command was similar to that of his father's. 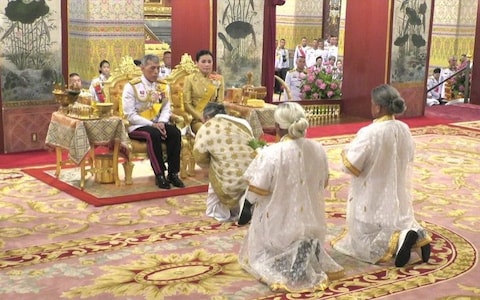 The king announced he had married Queen Suthida three days ahead of the coronation; their long-term relationship had never before been officially acknowledged

Outside the palace walls, people in yellow polo shirts sat on roadsides, holding up portraits of the king and the national flag as 19th-century canons fired to announce the new reign. Yellow is the colour of Monday, the day the king was born, and the colour of the sun, which represents the monarch in the cosmos according to Thai culture.

One onlooker, Kanjana Malaithong, told local media she had travelled since 1 am from northern Thailand to witness the ceremony, which was shown live on big screens outside the palace.

"I'm so overjoyed ... There'll never be another chance like this, it's a once-in-a-lifetime event," she said. In his first speech to members of the royal family, the Privy Council, and top government officials, among others, the king called for national unity.

"I invite everyone here and all Thai people to share my determination and work together, each according to his status and duty, with the nation's prosperity and the people's happiness as the ultimate goals," he said.

Prime Minister Prayuth Chan-ocha, the speaker of the parliament, and the chairman of the Supreme Court - representing the three branches of government - also spoke to express "gratitude" to the king.

Thai coronation rituals are a mixture of Buddhist and Hindu Brahmin traditions dating back centuries. One of the many official titles King Vajiralongkorn will take is Rama X, or the 10th king of the Chakri dynasty founded in 1782. 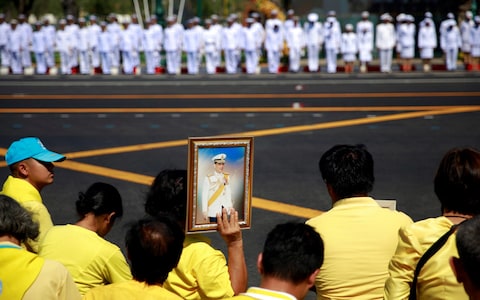 Saturday's rituals were about transforming him into a "Devaraja", or a divine embodiment of the gods.

The king received the royal golden plaque containing his name and title, the royal horoscope, and the royal seal, which were made in a three-hour ritual last week.

He also received and put on five articles of the royal regalia from the chief Brahmin. 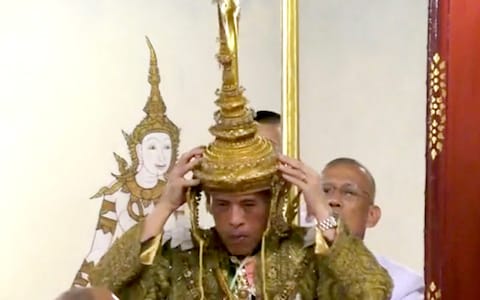 The crown weighs 16 lb, and signifies the monarch's burden

King Vajiralongkorn put the crown on his head himself with the help of court officials, and adjusted it several times during the ceremony.

Before the crowning ritual, he appeared dressed in white robes as he underwent a purification ritual, sitting under a canopied fountain that poured consecrated waters over his head. 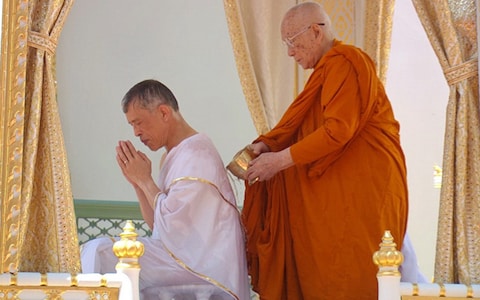 The king, also known as Rama X, underwent a purification ritual as part of the ceremony

The king will proclaim himself the royal patron of Buddhism later on Saturday evening, and perform a private housewarming ritual at the royal residence where he will stay the night, as previous kings have done.

During 18 months of his reign so far, King Vajiralongkorn has moved to consolidate the authority of the monarchy, including taking more direct control of the crown's vast wealth with the help of Thailand's military government.

Thailand ended absolute rule by its kings in 1932, but the monarchy remains highly revered as the divine symbol and protector of the country and Buddhist religion.

An elaborate three-day ceremony is planned for the official coronation of Thailand’s King Maha Vajiralongkorn, who ascended the throne after... Read More...

BANGKOK, April 6: Thailand began elaborate rituals on Saturday leading to the coronation of King Maha Vajiralongkorn, who will be... Read More...

Over 1,000 cargo trucks stuck at Nepal-China border points
11 hours ago

One commits suicide at quarantine facility
22 hours ago

Govt ready to amend constitution on the basis of justification: PM Oli
3 hours ago

Over 1,000 cargo trucks stuck at Nepal-China border points
11 hours ago