Thailand rushes to rein in cannabis use a week after decriminalisation 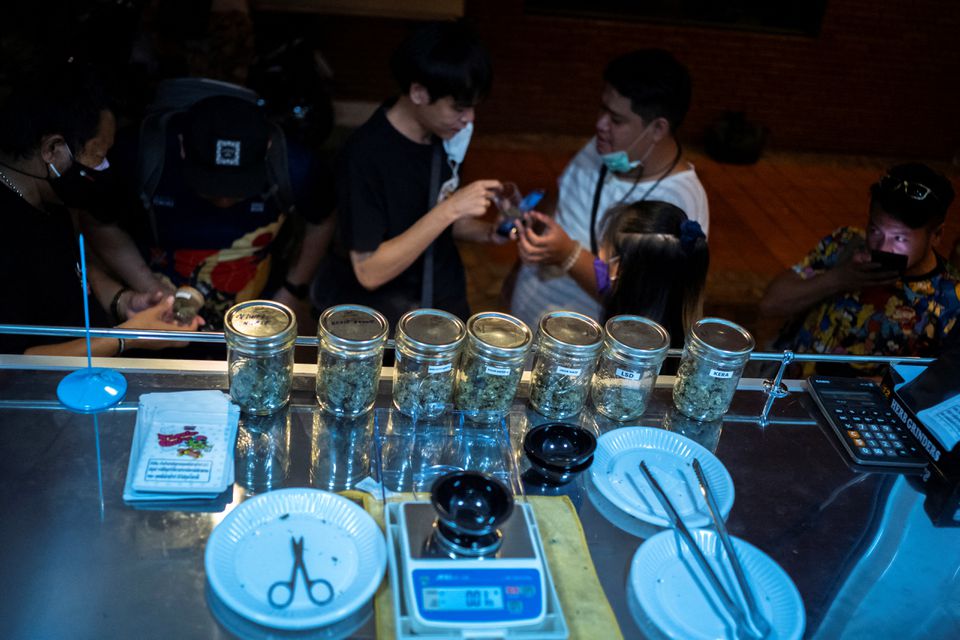 Customers queue to buy cannabis at the Happy Bud, a cannabis truck at Khaosan Road, one of the favourite tourist spots in Bangkok, Thailand, after it was removed from the narcotics list under Thai law, June 13, 2022.

BANGKOK, June 18: Thailand hastily issued a raft of new regulations for cannabis use this week after a long-planned decriminalisation raised alarm at the potential for unchecked use of the substance anywhere and by anyone - including children.

Soon after the country became the first in Asia to legalise growing and consumption of cannabis in food and drink on June 9, businesses began openly selling marijuana, with strains called "Amnesia" and "Night Nurse" on offer from a truck in Bangkok. read more

The rapid rise in cannabis sales sparked concern from a Bangkok city official: Deputy Permanent Secretary Wantanee Wattana said at least one person had died and several were hospitalised this week after consuming or smoking marijuana.

A draft cannabis bill is making its way through parliament, but could be months away from becoming law.

"There are no control measures other than word of mouth," lamented Mana Nimitmongkol, head of the Anti-Corruption Organization (Thailand), in an online post earlier this week.

This week, the central government has been issuing piecemeal rules to try to bring some order to cannabis use.

On Friday, new regulations went into effect forbidding all public smoking of cannabis as well as the sale of marijuana to people under the age of 20, pregnant women and breastfeeding mothers. The rules were published overnight in the Royal Gazette.

Several other rules included banning cannabis from schools, requirement for retailers to provide clear information on usage of cannabis in food and drinks and the application of a health law that defined smoke from marijuana a public nuisance punishable by jail and a fine.

Critics have said the government rushed to remove criminal penalties on marijuana before passing a law to ensure the substance is regulated.

Thailand's health minister Anutin Charnvirakul, a leading advocate for the legalisation of cannabis, has defended the government's approach to legalisation.

"We legalised cannabis for medical use and for health," Anutin said at Government House on Friday.

"Usage beyond this are inappropriate... and we need laws to control it," he said.

Anutin's Bhumjaithai Party campaigned on legalisation of marijuana ahead of 2019 election and is a main partner in the ruling coalition.

Thailand decriminalizes marijuana, but not the strong stuff

BANGKOK, June 9: Thailand made it legal to cultivate and possess marijuana as of Thursday, like a dream come true... Read More...

As per the existing Narcotic Drugs (Control) Act 1976, production, sale, and consumption of marijuana is banned in Nepal. Marijuana... Read More...

MAHOTARI, April 22: Police have held one man along with legally banned drug ‘marijuana’ weighing 8.5 kg on charge of... Read More...

Chances of rain with thunder today
36 minutes ago