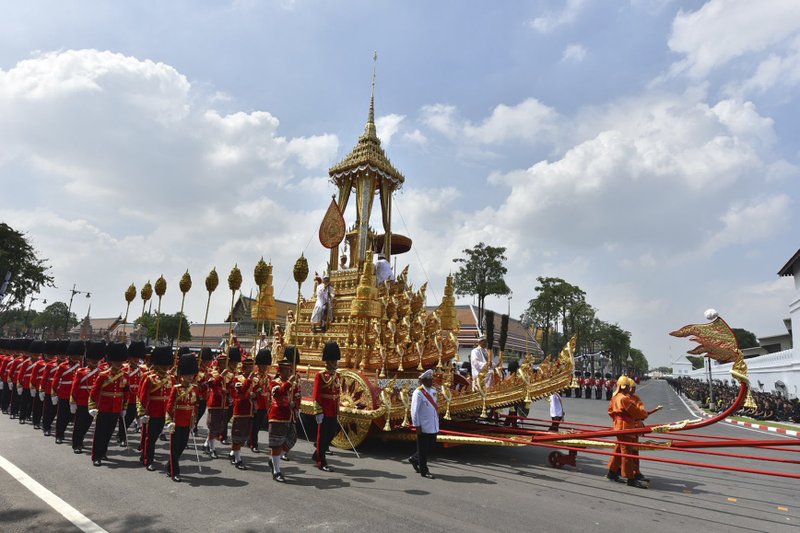 BANGKOK, Oct 26: Grieving Thais clad in black mourned on Bangkok’s streets or at viewing areas around the nation Thursday as elaborate funeral ceremonies were held for King Bhumibol Adulyadej followed a year of mourning.

Three separate and intensely solemn processions involving the current king, thousands of troops, a golden palanquin, a chariot and a royal gun carriage were moving a ceremonial urn representing Bhumibol’s remains from the Dusit Maha Prasad Throne Hall to the newly built crematorium. The journey along a 2-kilometer (1.2-mile) route will take at least three hours and is being watched by tens of thousands of mourners dressed all in black and is being broadcast on most Thai TV stations and could be seen at dozens of designated viewing areas across the country.

Before dawn, 63-year-old Somnuk Yonsam-Ar sat on a paper mat in a crowd opposite the Grand Palace in Bangkok. Her granddaughter slept in her lap and her husband rested his head against a metal barrier. The family came from the coastal province of Rayong, where they run a food stall.

Somnak waved a fan to cool herself but said she was not tired.

“I feel blessed to be able to sit here, and be part of this,” she said. “It’s an important day for us.”

The funeral for Bhumibol will take place over five days and began Wednesday with his son, King Maha Vajiralongkorn, performing Buddhist merit-making rites before chanting monks and officials in immaculate white uniforms.

Bhumibol will be cremated on Thursday evening within a golden edifice built over a year and representing mystical Mount Meru, where Buddhist and Hindu gods are believed to dwell.

Deceased Thai royals have traditionally been kept upright in urns during official mourning. But Bhumibol, who spent much of his early life in the West, opted to be put in a coffin, with the royal urn placed next to it for devotional purposes.

Bhumibol’s death at age 88 on Oct. 13, 2016, after a reign of seven decades sparked a national outpouring of grief. Millions of Thais visited the throne hall at Bangkok’s Grand Palace to pay respects.

The adulation Bhumibol inspired was fostered by palace courtiers who worked to rebuild the prestige of a monarchy that lost its mystique and power when a 1932 coup ended centuries of absolute rule by Thai kings.

That effort built a semi-divine aura around Bhumibol, who was protected from criticism by a draconian lese mejeste law that mandates prison of up to 15 years for insulting senior royals.

But he was also genuinely respected for his development projects, personal modesty and as a symbol of stability in a nation frequently rocked by political turmoil, though his influence waned in his final years.

The funeral is by design an intensely somber event, but also rich in history and cultural and spiritual tradition.

Mourners are permitted to prostrate when royal processions pass but must not shout out “Long Live the King” or hold up cellphones to take photos or selfies.

Boonjerd Buasawat, a 61-year-old fruit vendor from the resort island of Phuket, had been waiting near the cremation site since midday Wednesday and slept there overnight.

“I want to be here together with a group of people who dearly love their king,” he said. “Our love won’t die until we too pass and follow him.”

Thais have braved tropical heat and torrential monsoon rains to secure street-side vantage points to witness the funeral. Thousands of police and volunteers are on hand to ensure order and entry into the royal quarter, which has been tightly controlled to eliminate the faint possibility of protest against the monarchy or military government.

An activist had been detained earlier this week after writing on Facebook that he planned to wear red clothing on the day of Bhumibol’s cremation, a color associated with support for political movements ousted in recent coups.

KATHMANDU, August 26: Nepal U-15 side will face India in the final as it swept aside Bangladesh in the semifinal of... Read More...