Tens of thousands strike in India as slowdown hits jobs 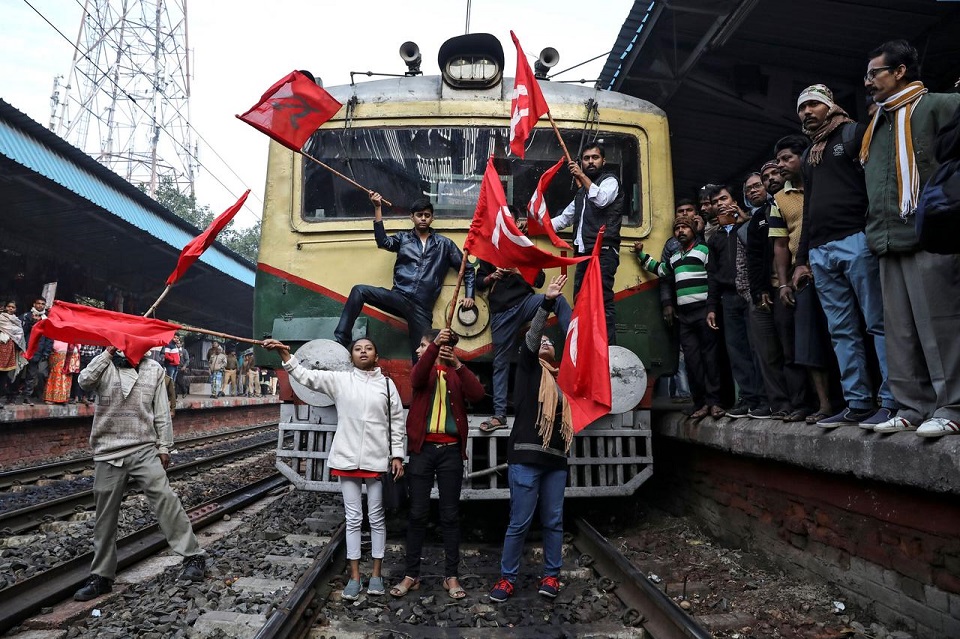 Supporters of the Communist Party of India-Marxist (CPI-M) block a passenger train during an anti-government protest rally, organised as part of a nationwide strike by various trade unions in Kolkata, India, January 8, 2020. REUTERS/Rupak De Chowdhuri

NEW DELHI, Jan 8: Tens of thousands of workers affiliated to trade unions led a strike in parts of India on Wednesday, disrupting transport and banking services in a protest against privatisation and the growing impact of an economic slowdown on jobs.

More than 10 national trade unions affiliated to left-wing parties, including the main opposition Congress, have called for a nationwide protest against Prime Minister Narendra Modi’s labour reforms. Those include the privatisation of state run companies Air India and oil major BPCL (BPCL.NS), as well as a merger of public-sector banks.

In the eastern state of West Bengal, workers disrupted train services in Kolkata and other towns while shops and banks were shut at various places.

Buses, taxis and auto rickshaws stayed off the road in West Bengal, Kerala and some other states though the national capital Delhi and the financial hub Mumbai remained largely unaffected.

C.H. Venkatachalam, general secretary of the All India Bank Employees’ Association, said the proposed merger of 10 state banks into four banks would affect jobs and could hit the recovery of bad loans amounting to near $140 billion.

“Modi government’s policies have led to a severe economic slowdown and have created bad loans for banks,” Venkatachalam told Reuters by phone, adding the government should take steps to help boost consumer demand by offering incentives to workers.

The government has warned its employees that participation in the strike in any form would lead to deduction of wages and “appropriate disciplinary action”.

Asia’s third largest economy is facing its worst slowdown in decades, and the government on Tuesday forecast 5% growth for the current financial year, the slowest pace in 11 years, blamed on weakening demand and private investment.

In a tweet, Congress leader Rahul Gandhi said the policies of the Modi government have created “catastrophic unemployment” and weakened state-run companies.

Thousands of people have lost jobs in the manufacturing and the construction sector and debt-ridden companies have cut their investment plans.

The unemployment rate rose to 7.7% in December from 7% a year earlier, data released by the Centre for Monitoring Indian Economy, a Mumbai-based think tank, showed.

The government is likely to cut spending for the current fiscal year by as much as 2 trillion rupees ($27.87 billion) as it faces one of the biggest tax shortfalls in recent years, mainly due to economic slowdown.