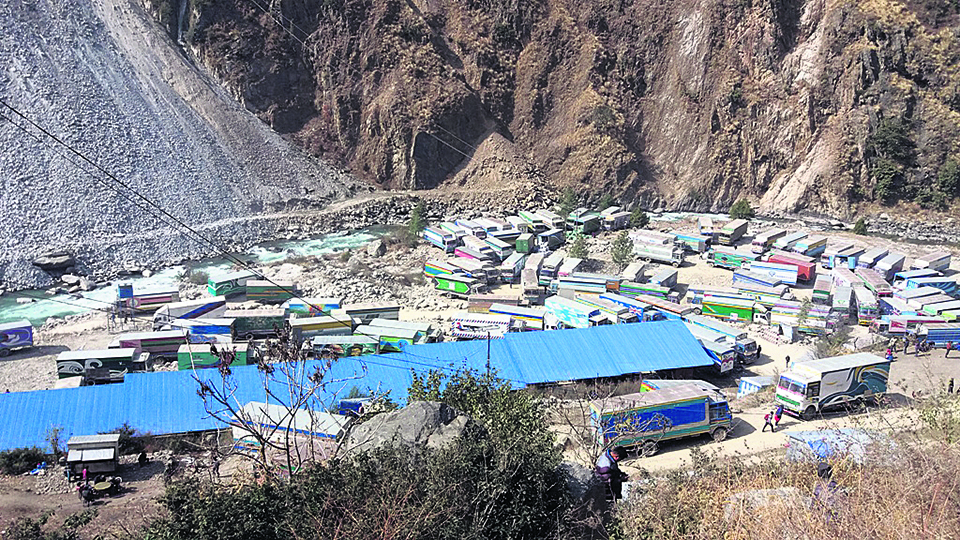 RASUWA, June 23: Twenty-two drivers and assistants of containers importing and exporting goods from Kerung, China, have been provided with temporary letters of permit for entry into China.

Residents of Rasuwa are given a year-long permit for entry into the northern neighbor. However, as this posed a problem for container staff from other districts, China has started providing permits that have validity of 15 days.

However, drivers and assistants have to stay in specified hotels and they have to get visa stamped on their passports several times. While Chinese officials claimed that they provide permits for 15 days, Immigration Officer Bishnu Gharti stated that the validity of the permit remains only for 3 to 7 days.

“The Chinese provide permissions themselves, and they do so according to circumstances they deem right,” Gharti said: “We are yet to begin a related process.” He added that a proposal in this regard has already been sent to the Immigration Department.

Beginning mid-March, Chinese authorities have started granting permission to drivers and assistants in a one-way manner. The permits are provided by Chinese officials to the concerned, on the basis of the validity of their passport and driving license.

The Chinese officials had granted the first permission, with a validity of five days, to Santa Bahadur Waiba in mid-March. While initially the drivers used to be aided by Nepal Police, they now get across the border themselves following visa procedures, Superintendent of Police Dilip Poudel said.

Despite trade conduction in the region from mid-2014, containers from beyond the district were allowed to function only till Rasuwagadhi. The containers were then taken to and from Kerung by drivers from Rasuwa.

Promotion of international trade practice is expected with the provision of permits to Nepalis till Kerung of China. The effort to provide passes had been going on for a long time.

A similar initiative for easy passage to Kerung for all Nepali and business-people is also being taken. On the other hand, citizens hailing from Rasuwa are provided with a 'China Pass' with a validity of one year that allows them entry and exit on the Nepal-China border. Denizens from 15 districts that share their borders with China are granted permission from the district administration office, local administration, border administration, or the immigration office for a year.

According to data recorded from October 15, 2015 to June 17 this year, 10,530 citizens from the 15 districts have benefitted from the one-year pass. Operation of Rasuwagadhi Customs Point has since observed a surge in traders, business-people and drivers going to Kerung for employment.

KATHMANDU, Sept 7:  Nepal will now be able to use all dry ports of China to ferry goods from China's... Read More...

Fighting human trafficking in Nepal: Trying to put a stop to sex trade to India, China and the world

It’s easy to cross the border between Nepal and India. Too easy. Most of its 1,600km is marked by simple,... Read More...