RASUWA, Nov 4: A total of 9,614 Nepali citizens from Rasuwa district have acquired one-year pass to go to China, from October 15, 2015 till November 1 this year. The pass is a privilege exclusive to the residents of the district that shares border with China.

According to the Department of Immigration’s office at Rasuwa, the number of Rasuwa residents to acquire the pass to go to Kerung is rising.

The opening of the Rasuwagadhi-Kerung custom point has not only increased the volume of trade between China and Nepal, but also opened up employment opportunities both at Rasuwa and across the border.

After getting the pass that allows them to travel to Kerung, Nepali citizens have been finding work at hotels, dance bars, and transport and construction companies. Following the opening of the Rasugadhi border point, the number of traders, entrepreneurs and drivers to visit Kerung has gone up, according to immigration officials.

The one-year pass for Rasuwa residents has also helped create job opportunities in the transportation sector.

As there is no arrangement of a pass for those outside Rasuwa, there is no choice for traders than to find drivers from Rasuwa to drive containers and trucks in the Rasuwagadhi-Kerung stretch. A driver makes up to Rs 7,500 for a one-way trip.  Kerung is 24 kilometers from Rasuwagadhi.

“It’s Rs 7,500 for driving a truck from Kerung to Rasuwagadhi or from Rasuwagadhi to Kerung. We have got employment opportunities after the custom point came into operation,” said Ram Tamang, a local driver.

To reap the benefit of the pass, some have even bought their own containers for import and export of goods.
The Rasuwagadhi-Kerung border point came into operation in November, 2014. The Chinese government declared this point as an international border point in August 2017.

Most of those who are working in hotel and dance bars of Kerung are in the age group 14 to 25. Officials at immigration office and District Administration Office, Rasuwa, say that they have become vigilant over the issuance of the card after there were reports that some were faking their age to get citizenship certificates to acquire the pass.

Those working in hotels are earning up to Rs 35,000 a month in Kerung.

Meanwhile, the Nepali government has been requesting the Chinese government to issue one-day pass for traders and business people from outside Rasuwa.

China used to provide business passes to Nepali entrepreneurs on the recommendation of Nepali authorities when Tatopani checkpoint was in operation.

“The Chinese side is positive to our request and they have taken the process forward for such temporary pass. But, it seems it will take some time,” said Krishna Poudel, Chief District Officer of Rasuwa. 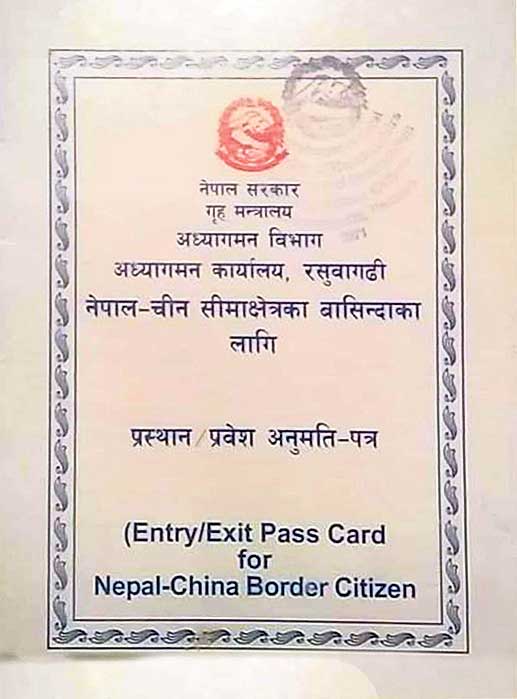 RASUWA, Jan 9: The Chinese side agreed to provide a 15-day temporary pass to Nepali drivers with valid passports to... Read More...

KATHMANDU, Oct 30: A Chinese think-tank has said that China is working here in Nepal impartially, without preferences for a... Read More...