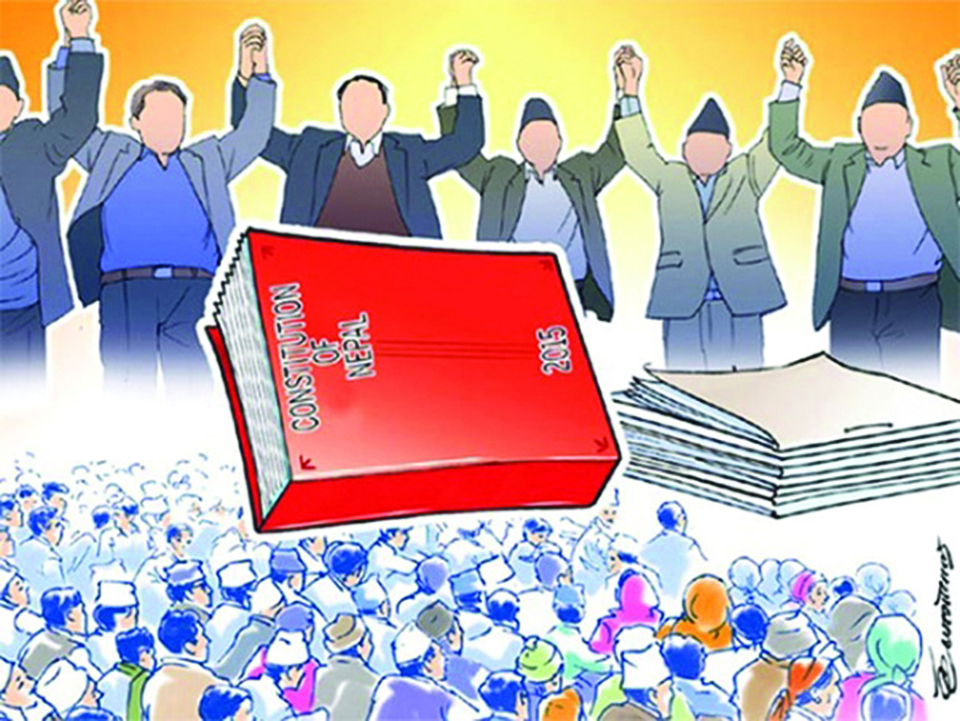 We should critique the constitution on legitimate grounds. But disseminating false information about it is unprofessional and unscholarly

A friend asked me recently: “Who are the progressive forces in Nepal?” “Those who speak against the constitution claim to be,” I said. I said this because I find some people still making mostly baseless criticisms of Nepal’s constitution to project themselves as progressives.

Recently, Khagendra Sangroula said the constitution is regressive with nothing for Madhesi community. A Madhesi writer, in his recent opinion piece, criticized Nepal’s constitutional arrangement relating to judicial appointment. He wrote, “In India, the president is required to consult the governors of concerned states during the judge appointment process for high courts.”  He argues that Nepal ought to do the same to maintain federal equations. He was distorting the facts.

Dipendra Jha in Federal Nepal: Trials and Tribulations writes, “For a truly a federal judiciary, the appointment of the Chief Justice of provinces should be done in consultation with the governors and chief ministers of the respective provinces…Governors of provinces should have the power to administer the oath of office to the chief justice and judges, as is the case in India.”

Again, he is also spreading false information. The truth is in India, governors, who act on the recommendation of Council of Ministers of state, don’t play any instrumental role in judicial appointment. District court judges are picked through public service commission for judiciary, while the High Court (HC) and Supreme Court (SC) judges are appointed on the recommendation of Collegiums of judges.

In the same book Jha writes that a Dalit was appointed as Chief Justice of India in 2007 in accordance with the provisions of proportional inclusion. The truth is there is no any constitutional provision on record in India that suggests for inclusive judicial appointments in the SC.

So what is the provision of judicial appointment in India?

The Supreme Court of India has introduced Collegiums system for appointing the judges. Before 1993, president would appoint judges in principle but in practice he would do so on the advice of concerned ministers. In this way, the ultimate power to appoint Judges of Supreme Court was vested in executive, which was not bound to pay a heed to the opinion of Chief Justice of India (CJI).

In the famous case of Supreme Court on Advocate Record Association v. Union of India (1993) the apex Court of India for the first time held that the President would be bound by the advice of CJI. Also, it has been held that there should be a 3-member “Collegium”, including CJI plus two senior-most judges, would play an instrumental role in recommending the names of judges who will be appointed by the President.

Supreme Court of India succeeded to curb government’s monopoly in appointing the judges and made the “Consultation process” more democratic and transparent.

Yes, the disgruntled parliamentarians had rushed to enforce National Judicial Appointment Commission Act (2014) in an endeavor to ensure a say of the government of the day in entire appointment and transfer of judges of higher judiciary but the highest Court of India (in 2015) held the entire Act unconstitutional.

Even in India, the state governments don’t play any role in appointment of judges of High Courts (HC). The Collegium of the SC plays a pivotal role in this. Collegium of SC and Chief Justice of HC are consulted by the President. The Governor of the state concerned merely administers oath of office and secrecy to the judges.

Like in India, our constitution introduces well-ordered and well-regulated judicial machinery with the Supreme Court at the apex. India and Nepal adopt a single judiciary—unlike America’s dual judiciary—to protect and promote the federal principles and ensure that the judicial departments have the final say in interpreting any law of the land.

Needless to say, social development, prosperity and strengthening of democratic system largely depend on complete justice, independent judiciary and adherence to rule of law. We must keep the judiciary free from political influence. Independent and impartial judiciary is the best defense of democracy.

As for the constitution, we should critique it on legitimate grounds. But disseminating false information about it is unacademic, unprofessional and unscholarly.

The author has LLM in Constitutional Law from Uttaranchal University, Dehradun

The government is planning to double existing number of judges in Nepal’s courts by amending the constitution. Does it... Read More...