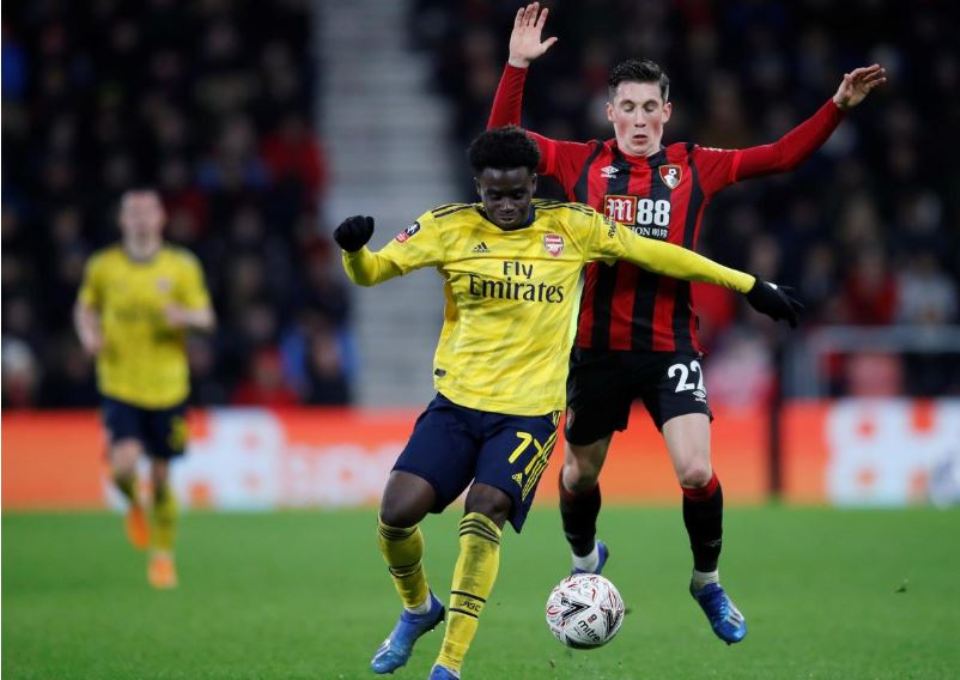 Bournemouth, Jan 28: Arsenal teenager Bukayo Saka scored one goal and set up another as the Londoners sealed a place in the FA Cup fifth round with a 2-1 win over Bournemouth at the Vitality Stadium on Monday.

Left-back Saka and striker Eddie Nketiah netted inside 26 minutes as Arsenal’s much-changed lineup made a dominant start and fought off a late Bournemouth rally to secure a tie against third-tier Portsmouth back on the south coast.

Saka, 18, blasted the ball into the roof of the net from a tight angle after five minutes before his low cross provided a tap-in for Nketiah, who was recalled this month from a loan spell at second-tier Leeds United.

Bournemouth’s Sam Surridge scored in the fourth minute of added time to set up a nervous finale for Mikel Arteta’s side but the hosts could not find an equaliser and are left to focus on the battle for Premier League survival.

“Mikel is trying to bring back the philosophy of the Arsenal way. We did that well in the first half, not so much in the second half,” Saka told BT Sport.

Bournemouth’s last-gasp goal them some hope, Simon Francis’ low cross eluding everybody and allowing Surridge, 21, to score his first goal for the club after a loan spell at Swansea City.

“It was just a poor start. Tough first half hour and we struggled to deal with their movement. We weren’t ourselves. But for the last 60 minutes we scrapped and almost got something in the end.”

London, Jan 10: Arsenal manager Mikel Arteta does not expect the club to make any major signings in the January transfer... Read More...

What we saw at Teku Hospital (photo feature)
17 hours ago
Oppn parties fail to secure majority seats in parliament to form new govt, Oli likely to be reappointed as new PM
14 hours ago