Teenage pregnancy on rise in Rolpa 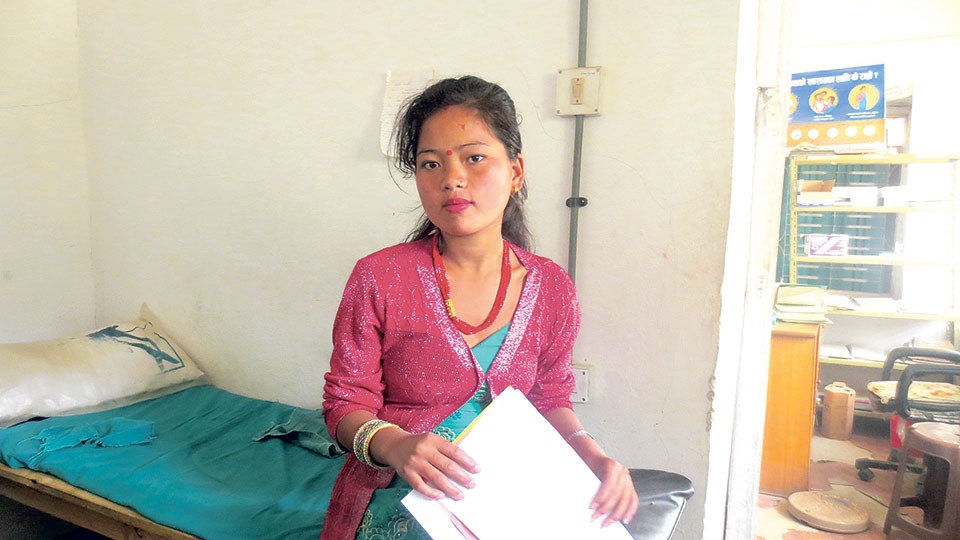 Simran Pun, 15, at the Rolpa hospital in this recent photo.

ROLPA, May 10: Simran Pun is 15-years-old.  A resident local of Triveni Rural Municipality -7, she is three-month pregnant presently. “I realized that I was pregnant only after I was three months into pregnancy. I came to know about it when I visited hospital following stomach ache,” she said.
As soon as she became aware of it, the first thought that came to her mind was getting an abortion. However, rethinking changed her decision.

“When I came to know about the pregnancy I wanted to abort it but later I thought about it a lot. I was in a dilemma. I had expected that I would conceive so unknowingly. But when the doctor confirmed that I was pregnant, I thought a lot.  Realizing the baby was my own, I decided to bring the baby to in this world,” she stated.

Pun had married a 17-year-old boy of her own village three months ago. The couple who tied nuptial knot with their own will had no plans of having a baby so early. However, Pun says that ‘it happened right in the first contact’.

“Doctor has suggested for getting a video x-ray. As I was nervous, my sister accompanied me to the hospital. During these visits, she advised me to keep visiting the doctor regularly and that I should deliver the baby in a hospital when time comes,” she added.

Pun has been visiting Rolpa Hospital where a many girls like her come with the similar case. Teen pregnancy is very common in this part of world. Alarmingly, numbers of such pregnancies seems to have grown in the past years, the hospital’s administration said.

“Teenage girls around are getting pregnant. It is a very risky for the mother and babies’ health. Remarkably, this trend is growing,” noted Dr Anil KC of the hospital.

According to KC, ‘love marriages’ have been triggering such incidents these days. Earlier, it was due to parents who would be force to marry at early age but now girls and boys, when are in love relationship, elope at a very tender age.

“This is a changing trend. Most of the girls coming here with pregnancy are between 14 to 20. That’s simply not an age to bear a child,” he said.

Early pregnancy and early motherhood have taken serious toll on girls’ life. Because of that stillbirth, premature births are also increase, let alone poor health of the young mothers. “They look just like a kid themselves and they get pregnant. I feel so sorry about it,” KC lamented.
Simran Roka of the same municipality eloped with a 10th grader when she was an 8th grader. That was last year. Now, she is pregnant.

“There was a boy in our village. He would always follow me and try to impress me. After sometime, even I also started to feel for him. Our love story begun and I eloped with him,” she narrates. “Now, I am going to have a baby, though I think it is bit early,” she added.

Roka is not aware that early pregnancy or motherhood is not good. Not only her and baby’s health is at risk but also she might not be able to progress in her life, she says. “It might not be good to marry so early. I should have given first priority to studies. But what can be done now?” she questioned.

One of the major reason, she said for getting married, was the way people view girls and boys when they are seen together. “Intimacy without marriage is not tolerated in the society but after marriage you are free to be with each other. That is the reason why young girls and boys get married as soon as they fall in love,” she reasoned.

“In our village, you cannot be close to your opposite sex. As a girl, if people see you talking to boys, they chastise you and rumors make round across the villages. So, what girls do when they fall in love is that they elope with their lover,” she maintained. “Nobody tells us that we should not marry at early age, but they have a huge problem if unmarried girls talk to boys,” she added.
The eligible age for marriage is 20 for both a boy and a girl. Child marriage is illegal. However, it is a social norm in many parts of the country including in the far western region. Rising cases of child marriage are also due to ‘love relationships’. However, after couples fail to handle it, they go to court. Sometimes, matters are even taken to police station.

According to Dr KC, child marriage is a serious problem in the region and should be addressed with urgency. “The society and the government should pay attention to the issue and intervene with proper programs and mechanisms,” he said.

KANCHANPUR, Mar 20: Teenage pregnancy rate is on the rise in Shuklaphanta Municipality of Kanchanpur as early marriage continues to take place... Read More...

Sept 20: A high gluten intake by mothers during pregnancy is associated with an increased risk of their child developing... Read More...

SOLUKHUMBU, May 31: An unmarried teenage girl has been arrested for dumping a newborn infant. The police arrested 17 –... Read More...