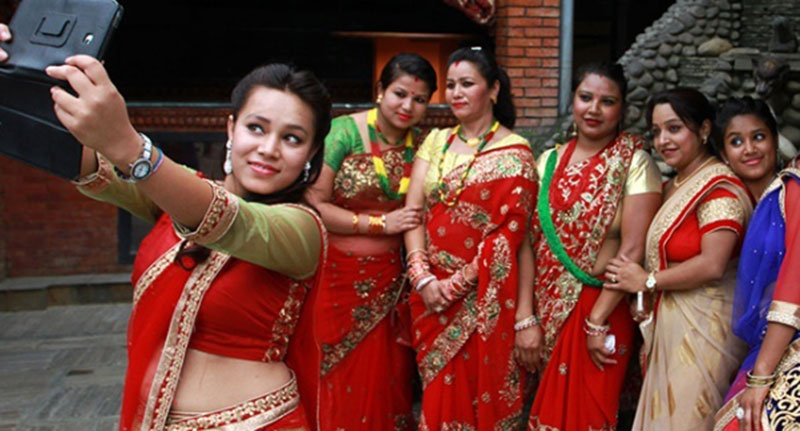 Being a woman or a man could have different implications when it comes to Teej budgeting
Recently I have been hearing many conversations around people being frustrated when festivals or cultural events approach. Frustration is mainly linked to financial constraints coupled with the challenges of meeting social expectations. One such upcoming event is annual Teej celebration.

The debate here is around whether women should celebrate it and why. If women do celebrate, there are various interpretations of why they do so.

One such progressive interpretation on the rise is that Teej is an annual cultural event to cherish womanhood and enjoy being among women folks, sharing one’s joy and sorrow that strengthens bonding between women. This is the joyful part.

The manner in which one celebrates cultural events like Teej matters in our society. Women and men both appear to have their own frustrations when festivals approach, depending on various factors such as their marital, financial and social status. Alongside jubilation surrounding the festivals, there are also costs attached; resources including monetary, time and energy involved and these become prime factors in determining how effectively one celebrates any festival or is at least perceived to do so.

In relation to Teej, based on my observations, frustrations occur among both women and men due to their financial status. This is the unpleasant part.

Budget constraint
To me, it appears that there are three groups of people celebrating Teej. First, those with endless budget (or Teej for the rich). As seen in various social media such as Facebook postings this type of celebration is conspicuously marked by expensive attires and jewelry and parties and dances in high-end restaurants, several weeks ahead of the event.

Second, those with limited budget (Teej for the growing middle class). This type of celebration is for those groups who strategically spend on clothes, food, etc. mindful of their limited budget. Third, those with meager or no budget (Teej for the working class), mainly daily wage earners. It is difficult for those in this category to manage any festival including Teej as they have other basic needs to fulfill given their very limited earnings.

However, in the post-earthquake scenario with meager growth of economy and limited economic opportunities coupled with soaring market prices, festive celebrations including Teej present a challenge. The excessive and expensive manner in which pre-Teej celebrations take place in big cities is alarming.

No matter which group one falls into, being a woman or a man could have different implications when it comes to Teej budgeting and thus lead to frustration. Moreover, it is the reinforcement of patriarchy that is linked to the budgeting of Teej that needs to be brought in sharper focus.

Patriarchy reinforced
In general, most festivals celebrated by a large majority of people in Nepal, including Teej, are occasions when we can witness patriarchy being reinforced. During one’s lifecycle, men and women play different roles: a man is also a brother, husband and/or father; and a woman is also a sister, wife and or mother. Depending on these roles, festivals become joyful (yet also frustrating) for women in particular. For men, festivals reinforce their masculine roles.

Being away from home for a few years, I have myself been confronted with questions on what my father and brother sent me for Teej or what my husband should send for his sisters back home.

Although there might be a few men who would be happy to do so, how fair is it to expect this from all men? Does this practice not put pressure on men to focus on being the so-called bread winner of the family? Should we not change our practice of reproducing these gendered stereotypes?

The increasing trend towards showing off gifts sent as well as received by sharing them on social media also indicates rising social tension.

I have come across some men who welcome Teej because it makes their female family members and friends happy. There are others who feel pressured with the social norms of having to provide additional resources particularly being ‘the man’—but also a brother, husband or father.

For a female, it may feel good to receive gifts and be entertained or it may feel unfair to be guided by our patriarchal culture that deems women as vulnerable requiring support from a male. This is because patriarchal norms demand that a woman—a daughter, sister, wife and mother— must always be protected and supported by a male—father, brother or husband.

Stereotyping men as bread winner reinforces the gender inequality coupled with male privilege that comes with patriarchy. Men at large, in some way or the other, directly or indirectly have been put to test. They are compelled to prove that they are stronger and more capable of protecting their female family members, although not conforming to this gendered role does not make them less male. Ironically, very rarely do we get to see men raise their voice against any of these practices. Perhaps this is because of their fear that it will hurt their masculinity or it is also possible that their sisters or daughters could feel bad about it.

It is high time that along with women, men also voice their concerns on the adverse implications of patriarchal norms and values. I believe that as long as festival like Teej is celebrated without reinforcing or reproducing gender stereotypes it is joyful.

Once we celebrate Teej in a manner that defeats its purpose, it is infuriating. Each one of us has a role to play in making positive social changes, dismantling patriarchal norms that govern us in our daily lives and empowering women in our society. Time is ripe for action.

The author is a Geneva-based development consultant