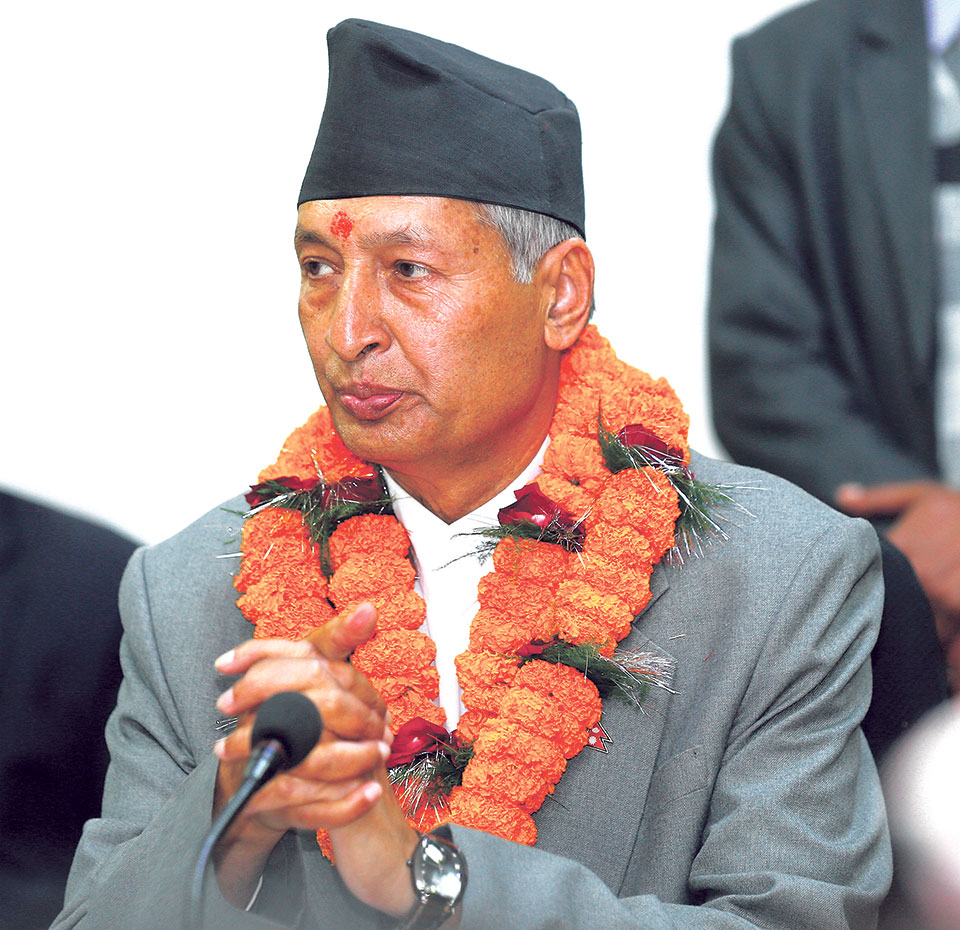 KATHMANDU, Feb 27: Prime Minister KP Oli has chosen Yuba Raj Khatiwada, a monetary economist, as the Minister for Finance and Policy, overlooking other senior leaders of his own party to lead a crucial ministry that is responsible for maintaining both micro and macroeconomic stability in the country.

The decision of Prime Minister Oli to tap into the experiences of a banking regulator, development planner and economist comes at a time when the country faces several economic challenges including resource mobilization for operationalizing the federalism. From the role of drafting the election manifesto of the 'Left Alliance', he has now arrived to a driving seat for the implementation of such a highly ambitious policy and program set out in the manifesto. The manifesto among other things aims to increase per capita income of each Nepali to US$ 5,000 within 10 years from the existing US$ 862 and making Nepal a developed country within 25 years.

The real test of newly-appointed Finance Minister Khatiwada will be on how he will pursue those policies and programs toward meeting those targets set in the manifesto, say observers.

Economists also say that the priorities of the new finance minister should be on steering the country toward high and sustainable growth.

"The major challenge for the new finance minister is the fiscal management under the federal system where the expenditures, particularly administrative cost, are going to balloon and there will be a shortage of financial resources," Shankar Prasad Sharma, former vice-president of the National Planning Commission, told Republica.

Unlike several past finance ministers, the new finance minister is well-informed about the economy and can swing into action immediately, according to Sharma.  "The growth has been averaging at 4.5 percent. So, finding the sources for higher, say 6.5 percent, growth, will be a major challenge for him," said Sharma.

The new finance minister, who is also a custodian of the exchequer, will also face the challenge of stopping the misuse of the state coffers and resisting the political pressure for distribution and hand-outs.  According to Sharma, the new finance minister should streamline the social security and other benefits so to make them sustainable and ensure that the target groups benefit.

Though Khatiwada has won accolades for disciplining the banking industry and maintaining the financial sector stability as governor of NRB, which is autonomous and largely immune to political pressure, he will have to ensure both micro and macroeconomic stability balancing it with interests of the CPN-UML-led government.

"Since this is the government that rose to power from the election, we have to fulfill the promises that we made to the people," said Finance Minister Khatiwada, giving a brief remark after assuming the office. "We have also made commitments at international level including graduating the country to developing nation status. We will meet those promises," he added.

KATHMANDU, June 12: The Development Committee under the Legislature-Parliament has directed the Ministry of Finance and Nepal Rastra Bank (NRB)... Read More...

KATHMANDU, Jan 27: The Ministry of Finance has issued instructions to the government banks to address the issue of grievances... Read More...

KATHMANDU, July 5: Deputy Prime Minister and Minister for Defense Bhim Rawal has accused the Ministry of Finance of not... Read More...

Some pictures from Teku Hospital: Patients are treated at corridors as hospital runs short of beds
28 minutes ago