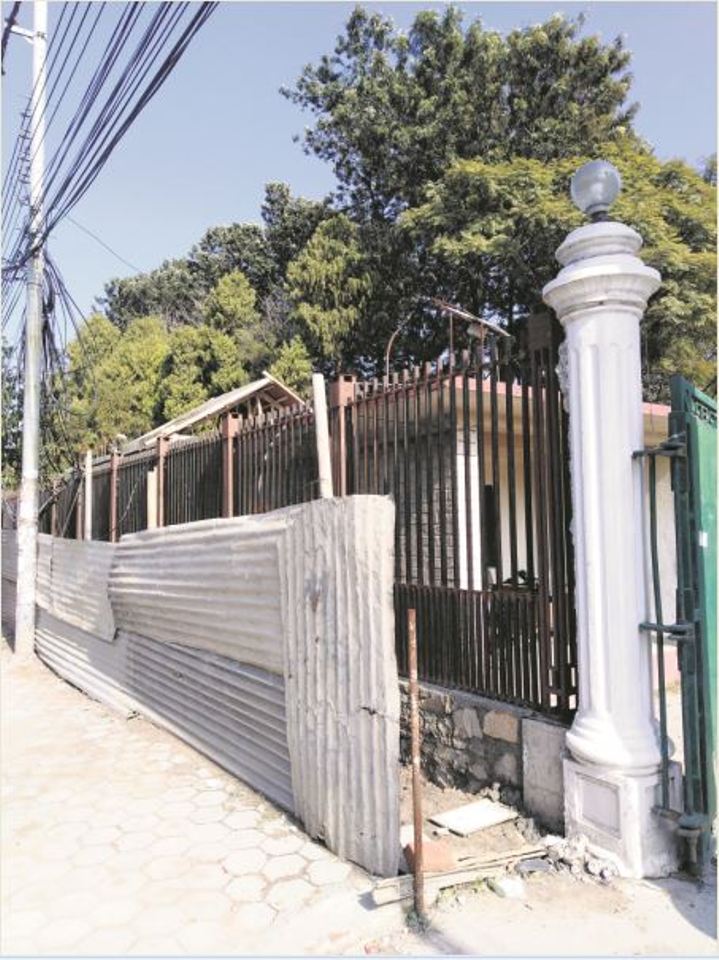 Football grounds, Pulchowk Engineering Campus will be the first ones to see their brick walls replaced with metal fences

KATHMANDU, Jan 22: As a part of its city beautification campaign, Lalitpur Metropolitan City has started to tear down old brick walls and build new ‘fence walls’ at three different places. These walls, as claimed by Mayor Chiribabu Maharjan, are called ‘less obstructive fence walls’ and the metropolitan office has plans to build them around Pulchowk Engineering Campus, Jawalakhel Football Ground and Lagankhel Football Ground.

The main objective of building these fences is to let pedestrians and the general public enjoy a view of the monuments on the other side of the walls. “We have plenty of monuments around the city but they’re all somehow barred with thick, tall brick walls, obstructing the pedestrians and public to see the beautiful environment on the barred premises,” said Maharjan.

Since 1958, all main administrative offices of the engineering campus are housed in ‘Ananda Niketan’, which used to be Ananda Shumsher’s palace and carries historic significance. But most of the people do not know about the building or its history. “The move is aimed at showcasing monuments like this to the general public in order to help them better understand their existence and witness their beauty and uniqueness,” he said, adding, “The idea might seem simple but there are a lot of paybacks that follow.”

Maharjan further said that most such buildings and even public parks or other monuments are behind tall brick walls not only in Lalitpur but in all three districts of the Kathmandu Valley. This obstructs the pedestrians and public from enjoying the view of what lies beyond these tall brick walls.

“Similar is the case of football grounds. We are building such transparent walls around the football grounds too because we want the public to enjoy the view during matches even from outside the ground,” he said.

A total of Rs 6 million has been put aside by the metropolitan office to build transparent walls around Pulchowk Engineering Campus. Similarly, Rs 11 million and Rs 9 million has been allocated for building such walls around Jawlakhel and Lagankhel football grounds. While all these projects have already started, the metropolitan office estimates that the completion of the walls around Pulchowk Campus might take about two weeks and that around both the football grounds the next few months.

The metropolitan office has also kept its word to beautify the area on the premises of the most prestigious engineering college of the nation. “Lalitpur Metropolitan City Office has taken the full responsibility of building these walls and has also presented its plan to beautify the garden and the historic Ananda Niketan that lie on the premises,” said Laxman Poudel, campus chief of Pulchowk Engineering Campus.

However, Poudel mentioned that college administration is slightly worried that these new walls might let the loud traffic noise on the adjacent road be heard on the premises of the campus. “The only drawback of this project is that these new fences will not be able to block the noise from the busy road like the old brick walls do,” Poudel said.

“But it is not a big problem for us as this initiative has more pros than cons,” he added.

The public is also happy about this project. “The metropolitan office has put forward a new concept and everyone who walks along this road will be able to enjoy the view of the monuments even from outside the fence,” said a pedestrian Sankalpa Thapa who often walks around Pulchowk. “It is good to see that the metropolitan office is trying its best to deliver good services to its people in every way possible” he added.

Moreover, Mayor Maharjan mentioned that although currently the project is being implemented at only three different places of Lalitpur, his office does have plans to further expand the project to other places. The idea of expanding this project comes as Maharjan and his team members feel the essence of these monuments to be noticeable to the general public.  “Considering that there are many monuments around the city that need to be highlighted, we will expand this project to other places where it is possible,” Maharjan told Republica.

UML wins  both mayor and deputy mayor in Pokhara-Lekhanath metropolis

KASKI, May 26: CPN-UML has won both mayor and deputy mayor of Pokhara-Lekhanath Metropolitan City. ... Read More...