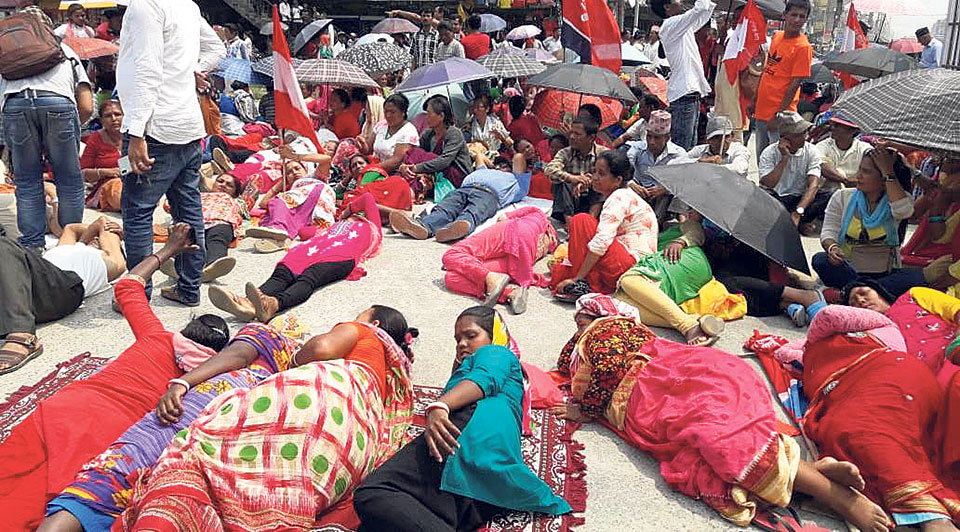 DAMAK, May 8: Tea workers have intensified their protest, demanding the implementation of Labor Act.

Tea workers are in protest for the past 38 days, demanding enforcement of the Labor Act, Labor Regulations and Social Security Act. They took to the street to protest refusal of tea industries to provide them minimum wages as per the Labor Act.

The agitating workers have demanded that they be paid minimum daily wage of Rs 385 fixed on July 17 last year in line with a provision in the labor law. Leaders of trade unions demand action against tea industries that are not implementing Labor Act and Social Security Act, and not giving workers minimum wage fixed by the government.

Bhupal Sapkota, in-charge of Province 1 of All Nepal Trade Union Federation, said that tea industries were denying minimum wage to workers. “Tea industries do not providing salary in line with the Labor Act. There is no environment for workers to work at low wages,” he said, urging the government to make needful intervention to ensure that workers get minimum wage.

Leaders of trade unions have vowed to continue their protest until tea industries agree to implement the minimum pay.

“The protest will force the government and industries to implement the Labor Act,” said Deepak Tamang, president of Nepal Tea Estate Workers Association, adding that they will not withdraw protest until tea industries agree to implement the minimum pay decision.

LOCAL UNITS URGE TEA factories TO IMPLEMENT MINIMUM WAGE
Meanwhile, Mechinagar Municipality has taken an initiative toward fulfilling demands of agitating tea workers. Bimal Acharya, Mayor of the municipality, urged the tea estates to provide the minimum wage to tea workers. “We have allocated millions of rupees in budget for laborers. We have made arrangement for their insurance. We are aware that tea estates are suffering in one or another way. But, they must fulfill their liabilities toward workers,” said Acharya, adding that the government should find a long-term solution to the problem.

Meanwhile, Raj Tea Estate of Mechinagar-7 has expressed commitment to provide its workers minimum wage fixed by the government following the request of the municipality. However, other industries are not yet positive toward meeting the workers’ demands.

Lok Nath Dangal, general manager of Nepal Tea Development Corporation, said that none of the tea estates can survive by offering workers facilities and benefits fixed by the government.
There are nearly 30,000 tea workers in Jhapa.