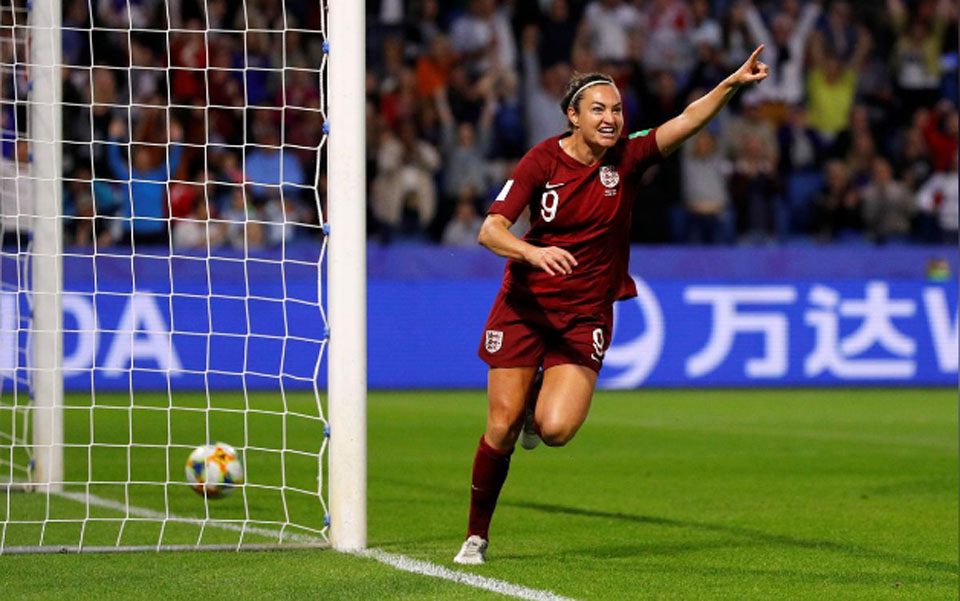 LE HAVRE, June 15: England’s Jodie Taylor scored the only goal as they broke the deadlock against Argentina just past the hour to secure a 1-0 win and reach the last 16 at the women’s World Cup on Friday.

England’s Nikita Parris had a first-half penalty saved by Vanina Correa, but Taylor got on the end of Beth Mead’s cross in the 62nd minute to give her side their second straight win.

England, who moved on to six points in Group D, join hosts France, Germany and Italy into the knockout phase.

Japan have four points after they beat Scotland 2-1 earlier on Friday, leaving the Scots without a point from two games.

“It was a good performance today by the team and good win,” said Taylor. “I remember Beth Mead playing a perfect ball which landed right on my foot.

“Patience was the key, we said it all week. We have had experience facing a block of defence through qualifying and got frustrated, but today we had the quality and it paid off.”

England coach Phil Neville had expected a tough game against an Argentina side who picked up their first World Cup point in a 0-0 draw against Japan in their opener and he was right.

“It’s not relief - I thought we were outstanding - the speed of our play against a team that was always going to be difficult to play against,” he said.

England dominated possession as the Argentines soaked up the pressure early on and the Lionesses had a golden opportunity to go ahead in the 28th minute when Alex Greenwood was brought down in the area by Ruth Bravo but Parris’s spot kick was saved.

Despite 11 attempts at goal, England were still looking for the breakthrough as they went in at halftime.

Correa again denied Parris early in the second half with a brilliant save from the forward’s 20-metre strike, but there was nothing the 35-year-old could do when Taylor latched onto Mead’s cross and tucked the ball away inside the box.

It was Taylor’s first goal for England in 430 days, and it capped a relentless all-out attacking performance by a team who finished third in the previous World Cup.

The Lionesses will next face Japan on Wednesday with the Group D top spot at stake while Argentina will face Scotland.

VISAKHAPATNAM, India, Nov 17:  India won the toss on Thursday and opted to bat in the second test against England. ... Read More...

At War With a Virus
16 hours ago

PM under pressure to probe medical procurement deal
17 hours ago

Australia's tour of Bangladesh postponed due to coronavirus
5 hours ago

IN PICS: Rhododendron forest remains silent amid COVID-19 lockdown in Panchthar
7 hours ago

Sub-Saharan Africa to fall into recession in 2020, says World Bank
13 hours ago