KATHMANDU, Oct 6: The Tatopani trade point-- one of two major trading points between Nepal and China -- has come into operation on Monday after nearly three months of closure.

Lal Bahadur Khatri, chief officer at the Tatopani Dry Port Customs Office, informed that 12 containers of goods entered Nepal on the first day of the operation of the trade point. “The process of check pass of the goods has started,” he added.

The border point had remained shut after flood and landslide triggered by incessant rainfall swept away Jambu Bazaar of the Arniko Highway and damaged several sections of the roads since monsoon. 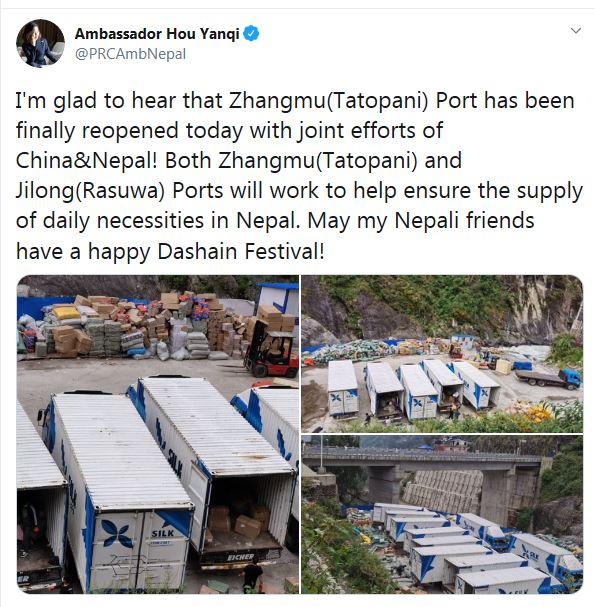 Although the road was maintained and was brought back to operation, the Chinese side hesitated to open the transit point stating that there was a risk of COVID-19 spread in Tibet in view of the increasing number of COVID-19 cases in Nepal.

Khatri informed that the first lot of goods in 12 containers had reached the Miteri Bridge on Saturday as per the agreement. According to the Customs Office, goods already stuck in China for months due to COVID-19 pandemic will be brought to Nepal in the first phase.

Nepali traders claim that more than 1,000 containers are stuck in the China side. The goods were ordered by the traders last year during the winter season. After the enforcement of lockdown in China to contain the spread of COVID-19, the goods that were supposed to be transported to Nepal several months ago remained stuck in China.

“New goods will be imported after the old ones reach Kathmandu,” said Khatri, adding that both the parties are holding discussions to bring the containers up to the yard of the old Customs Office. Currently, the containers are brought to Miteri Bridge, the Chinese border.

Tatopani border point to reopen in May

SINDHUPALCHOWK, April 28: The government has expedited preparations to bring back into operation the Tatopani border point between Nepal and... Read More...

KATHMANDU, Feb 9: The Tatopani customs point at the Nepal-China border in Sindhupalchowk district that was closed since January 16... Read More...

KATHMANDU, June 21: China has agreed to reopen the Tatopani customs point that remains closed since April 2015 when the earthquakes... Read More...