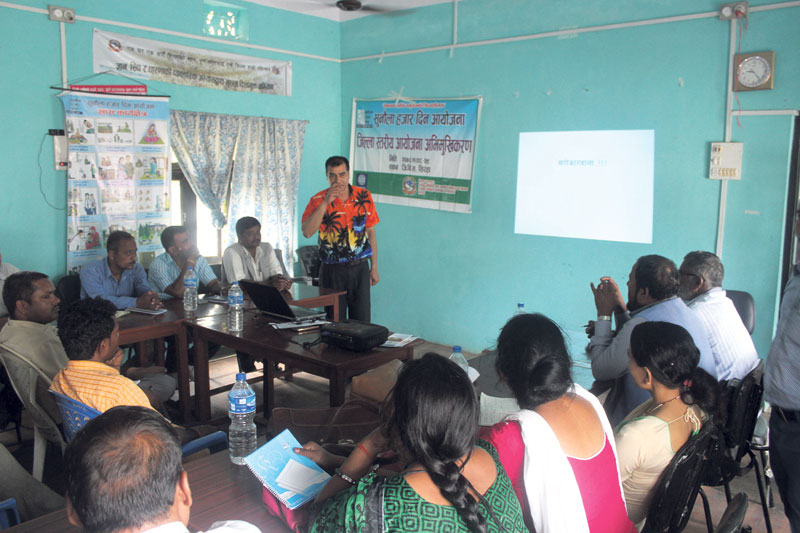 LAHAN, July 4: Two months ago, Sobha Singh of Harkatti VDC in Siraha district gave birth to her first baby. But her happiness was shortlived as the baby died  after a while the same day.

The reason for the baby's death was malnutrition. During her pregnancy, Sobha did not have a high-nutrition diet.

The incident took place in a VDC which is one of the target locations for the World Bank-funded 'Sunaula Hazar Din' (Golden Thousand Days) project. The project is being implemented with an aim to ensure nutrition for pregnant women from the day they conceive until the child reaches two years, according to Siraha district  coordinator of the project, Bijay Kumar Yadav.

Although the project targets women and children from poor and marginalized communities, the target groups in Harkatti VDC have remained deprived of any project benefits.

Another woman in the village, Janaki Mandal (Khatbe), is also pregnant. She falls within the target group, but she is unaware of the project.

Similar is the case with Lila Devi Mandal, who became a new mother two months ago. She frequents the doctor for the treatment of her newborn, who suffers from malnutrition. She herself is in weak health for lack of sufficient funds for adequate nutrition.

Although the project has been ongoing in Harkatti VDC since the last two years, VDC secretary Laxman Sah is not satisfied with the implementing body. According to him, no one in the village has ever benefitted directly from the project.

Ironically, the DDC has recorded the names of 2,238 women and children from 440 households as beneficiaries of the project.

There are irregularities in the implementation of the project from which a reduction in child and maternity malnutrition had been anticipated. The Commission for Investigation of Abuse of Authority (CIAA) also received complaints about misuse of project funds at Sothiyain and Maheshpur Patari VDCs.

Likewise, payments of two installments have not been made in Sanhaitha, Itatar and Harkatti VDCs, project coordinator Bijay Yadav told Republica.

“I was appointed project coordinator in the middle of the current fiscal year. The dispute over payments existed from the beginning,” he said.

A local community group first prepares a project proposal and submits it to the VDC and DDC respectively. In Siraha, the submission of the proposal was delayed. As a result, a budget of 100 million out of the total allocation of Rs 1,105 million for the project has remained unspent. Although the project was to be implemented in 27 VDCs, it is being implemented in 18 VDCs only, according to the project coordinator.

Even the advance amounts released under the project have not reached the target groups in the villages.

As per the 'Sunaulo Hazar Din Project Implementation Guidelines 070', the District Development Committee (DDC) has been entrusted with its implementation in the VDCs.

However, even after the end of the project (after 100 days), 20 percent of the total budget is yet to be released to the target VDCs, a source said on condition of anonymity.