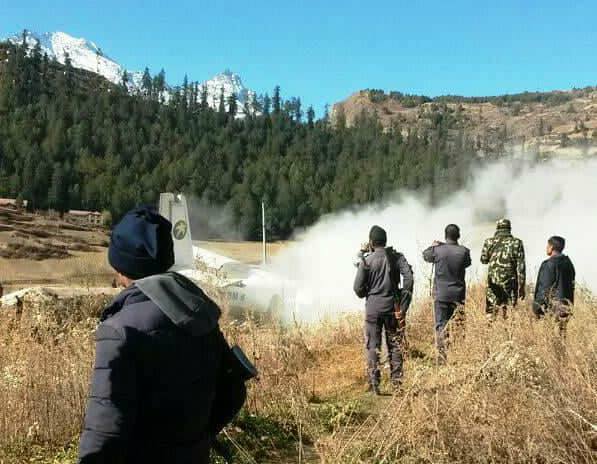 The aircraft with call sign 9N-ABM overshot the runway after its right-side tire burst while it was attempting to take off. It was en route to Surkhet, carrying 13 security personnel deployed for poll security in the district.

Altogether 16 people including the crew members were on board, according to Bhim Datta Panta, chief of Simikot Airport. Seven among them sustained minor injuries while nine escaped unhurt. Eyewitnesses said passenger broke the door open and came outside after the crash.

“The injured were immediately rushed to the district hospital for treatment,” added Panta. Among the injured, Assistant Sub Inspector Yam Prasad Dahal was airlifted to Nepalgunj by a Nepal Army's helicopter for further treatment after he complained of abdominal pain, according to Deputy Superintendent of Police (DSP) Kamal Prasad Nepal.

Likewise, air hostess Shreya Shrestha, who has suffered injury in the left stomach, has also been referred to Nepalgunj after preliminary treatment in Simikot. The aircraft's captain Basanta Lama and co-pilot Amit Gurung suffered nose bleeding. Their condition has been reported to be normal. The other injured passengers have returned home after minor treatment, according to Dr Ranjeet Yadav of the district hospital.

It is said that the aircraft suffered a flat tire after covering 100 meters on the runway during takeoff. “The pilot then applied brakes immediately but the aircraft did not stop, leading to the crash,” informed Kamal KC, chief of the Naya Bhairavi Battalion of Nepal Army, from the incident side.

The cockpit and the right wing of the aircraft have sustained complete damage while all three tyres were also left completely damaged.

Following the crash, the belongings and weapons of security personnel were scattered on the ground.

RIVERSIDE, Calif., Feb 28: Three people died and two were injured when a small plane carrying them home from a cheerleading... Read More...