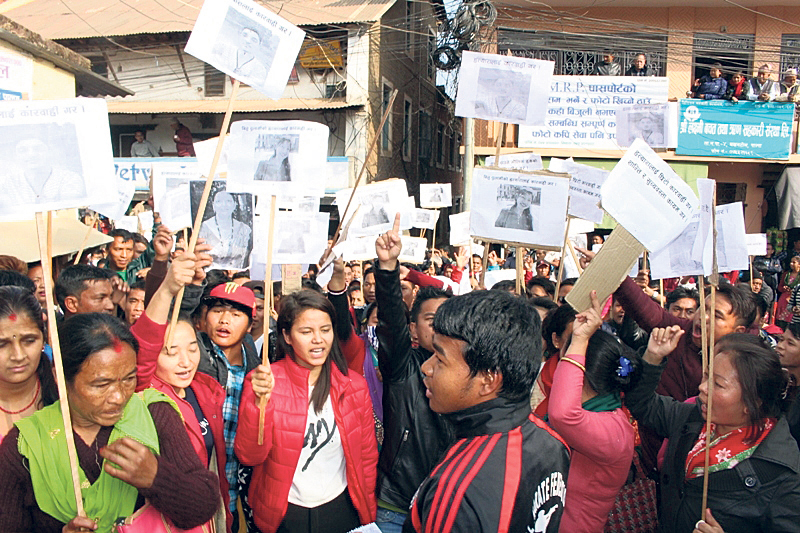 Locals of Tansen protesting against police for failing to arrest the culprits involved in the alleged murder of Binu Pulami, who had gone missing since Dashain. Photo: Republica

PALPA, Nov 28: Locals in Tansen on Sunday staged a protest against the police for failing to arrest the culprits involved in the alleged murder of Binu Pulami of Heklang VDC-6 of the district, who had gone missing since Dashain.

A policeman and three protesters were injured in the clash after the law enforcement agency resorted to baton charge at the protesting locals in the district headquarters.

Among the injured, Amar Bahadur Thada of Heklang-6, who received injuries in his head, is undergoing treatment at District Hospital, Palpa. The condition of others injured in the clash is reported to be normal.

After going around the town, the protesters had staged a sit-in in front of the District Administration Office, Palpa. They were venting their ire at the police for failing to arrest those behind the alleged murder.

Meanwhile, Chief District Officer, police chiefs and leaders of political parties held a discussion over the matter. During the meeting, political leaders demanded that the guilty should be brought to justice.

All the education institutions in the district remained closed on Sunday to press the local administration for expediting the investigation into the case.

Binu had gone missing since the Dashian festival. Binu had tied the knot with a boy from an upper-caste family four years ago. She had been facing torture and violence since the family did not accept her for belonging to a lower caste.

On Thursday, Binu's kin had filed a case at the police station, claiming that she was murdered. The kin of Binu claimed that the body found by the police near Ramdighat on October 20 was that of Binu's.

The family later identified the body based on her garment and photo.

Binu's husband Dipendra Basyal of Tahu-7, his parents have been stated as defendants in the charge sheet.

KATHMANDU, Oct 19: Locals of Chandragiri Municipality staged a peaceful protest in the capital on Wednesday, venting their ire against the... Read More...