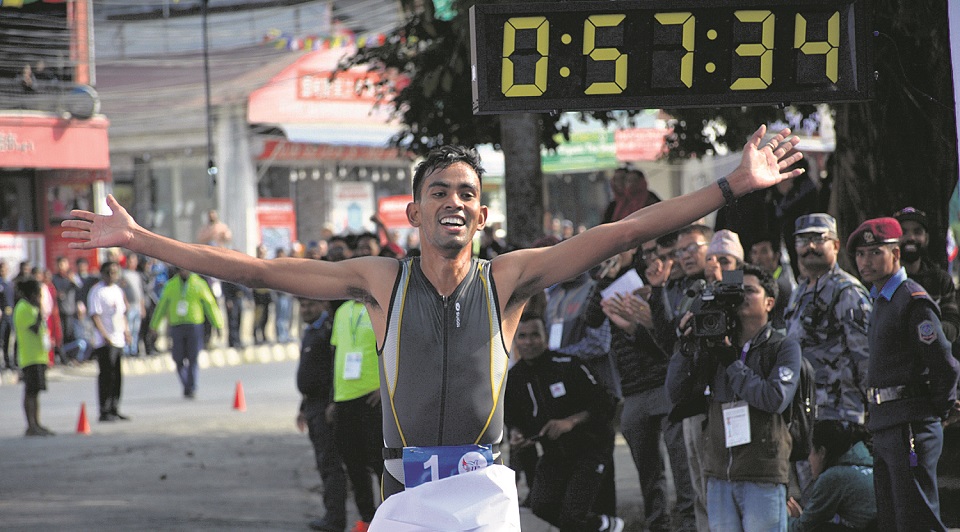 POKHARA, Dec 4: Himal Tamata has added another gold to Nepal’s medal tally in the 13th South Asian Games. He completed the duathlon of 5 kilometers running, 20 kilometers cycling, and 2.5 kilometers running in 57 minutes 33 seconds to claim the gold in Pokhara on Tuesday. Likewise, Nepal’s Laxman Malla finished in second place, in 59 minutes 13 seconds, whereas Sri Lankan Asith Perera was satisfied with bronze in 59 minutes 32 seconds.

Nepal has collected two golds and 2 silvers in triathlon so far. Earlier on Monday, Soni Gurung and Basant Tharu had won gold and bronze, respectively. On Wednesday, the last day of the event, Nepal will participate in mix-relay.

Six participants each from India, Sri Lanka and Nepal participated in the event. This is the second time Nepal has been participating in triathlon in South Asian Games. Earlier, Nepal has won a silver and a bronze in the 12th edition of the prestigious games. A team of Rudra Kumal, Himal Tamata, Roja KC and Yam Kumari Ghale had won silver in mix-relay whereas KC had won bronze in triathlon.