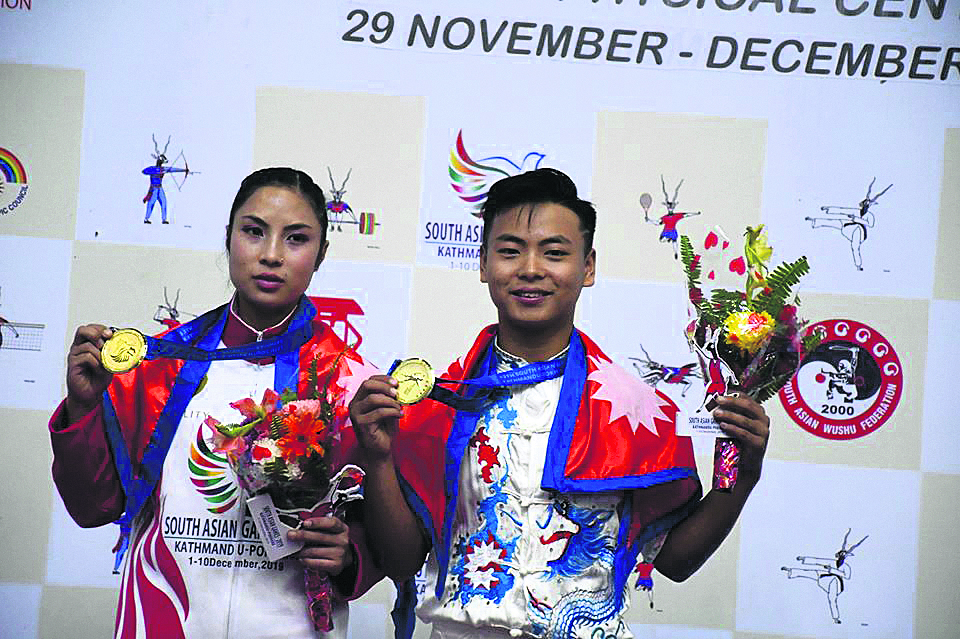 In women category for same discipline, Tamang overcame Sri Lanka’s PHG Vatsala and Noor Behar Begam who finished on the second and third places with 8.85 and 7.59 points, respectively.

In nanquan, Nepal’s Deepak Hamal collected 9.70 points to lead his fellow national Sajan Lama with 9.61 points on the second place and Bangladesh’s Mohammad Aamir on the third with 8.87 points. In women's category for the same discipline, Nepal’s Nima Gharti Magar is leading with 9.31 points followed by Bangladeshi Morjina Akhthar with 8.80 points and Sri Lankan Sanju Kumari with 7.61 points.

In taijiquan, Sri Lanka’s Tharindu Namal Aniruth is leading the charts with 9.69 points followed by India’s Gyan Das Singh and Nepal’s Hari Prasad Gole in the second and third places with 9.59 and 9.44 points, respectively.

In women's category for the same discipline, Sri Lanka’s MLDTS Gunsekera leads the points table with 9.24 points followed by Nepal’s Mina Ghalan and Bangladesh’s Dipti Das on the second and third places with 9.17 and 8.75 points respectively.

In 60 kg for the same, India’s Roshibina Devi defeated Bangladesh’s Rita Biswas Puja in single round robin to reach next round.

In 70 kg for the same, Nepal’s Binda Pun defeated Bangladesh’s Basuna Khandokar to reach the next round. In Sanda for men in 53 kg category, India’s Uchit Sharma reached final. He had defeated Nepal’s Amar Sunar in the quarterfinal.

KATHMANDU, Dec 5: Nepal has added one more gold in wushu at the 13th South Asian Games (SAG) held at the... Read More...

One more SAG gold for Nepal in wushu