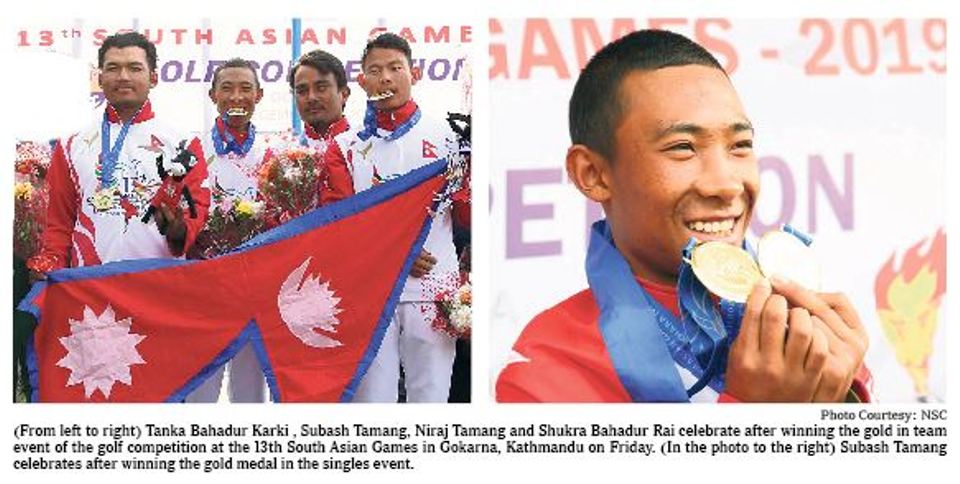 The 17-year-old collected 14 under-par-score of 274 for 72 holes to lift the gold medal. Tamang scored 3 under-par-score 69 on the final of the four-day event to clinch the top position.

Bangladesh’s Mohammad Faraz finished second with 6 under-par-score 282. Likewise, Nepal’s Shukra Bahadur Rai claimed bronze medal with 4 under-par-score 284. Tamang credited his association for the success in the games and aspired to keep improving in the sports.

“I had prepared for a year for South Asian Games. Golf association’s president Tashi Ghale has helped me a lot to prepare for the prestigious games. I aspire to do further well in golf,” said Tamang after the historic win.

Likewise, Tamang also led the golf team along with Shukra Bahadur Rai, Tanka Bahadur Karki and Niraj Tamang, to gold medal scoring a total of 838. Bangladesh won silver with 8 under-par-score 856 whereas Sri Lanka was limited to bronze with 878 score.

KATHMANDU, Nov 28: With the wait for a gold medal in boxing stretching back to the eighth edition of the South... Read More...

Sports infrastructure given priority in govt policies and programs

KATHMANDU, May 4: The government in its policies and programs for the upcoming fiscal year 2019/20 unveiled on Friday has... Read More...