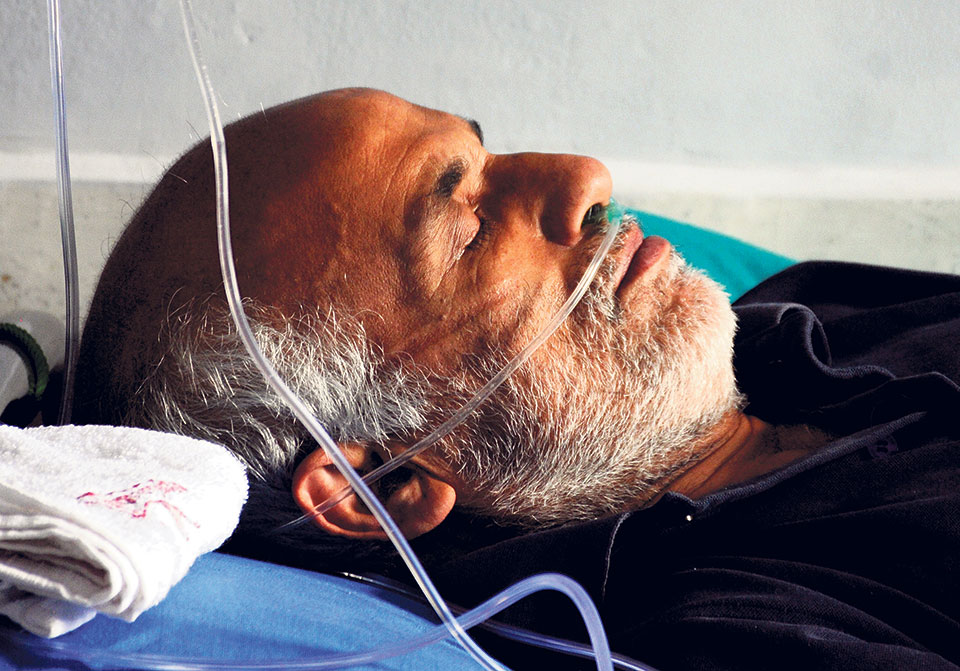 Dr Govinda KC at the Tribhuvan University Teaching Hospital Maharajgunj, Kathmandu on the 21st day of his hunger strike on Friday. This is his 15th hunger strike demanding crucial reforms in the medical education sector. Keshab Thoker/Republica

KATHMANDU, July 21: Although the agitating Dr Govinda KC was brought to the capital from Jumla on Thursday amid deterioration of his health condition,  talks with the government to resolve his demands and end his 21-day  fast-unto-death have fallen into uncertainty as both the government on one hand and Dr KC and his supporters on the other are sticking to their stances.

While Dr KC has demanded that the government form a ministerial talks team and agree to withdraw the National Medical Education Bill from  parliament in order to introduce it again in the spirit of the medical education ordinance as preconditions for  talks, the government side has taken a public posture against the demands put forth by Dr KC and his supporters.

Arguing that the protest launched by Dr KC was used by the opposition party as a pretext to launch anti-government protests, the government has asked  KC to end his hunger strike and sit for a dialogue for meeting his demands. The government side has also maintained that since the Medical Education Bill has already been tabled in parliament, Dr KC has to facilitate finalizing the bill with his inputs.

Speaking at a function in the capital on Friday, Foreign Minister Pradeep Gyawali alleged that some political parties and other elements have politicized the issue raised by Dr KC for their own petty interests. “Dr KC has to understand that his hunger strike and protests are being made a weapon by some political parties and bad elements,” he said.

Gyawali said it won’t be acceptable to the government if some political parties try to politicize the issues raised by Dr KC.

“The Medical Education Bill has been introduced in parliament. Dr KC has to end his hunger strike to give final shape to the bill,” Gyawali further said.

The government has been maintaining that the issue should be decided in accordance with the parliamentary process.

Earlier, the government had formed a team led by the education secretary to hold negotiations with Dr KC.

Prime Minister KP Oli’s press adviser Kundan Aryal said that informal negotiations are underway with Dr KC and his supporters. “Many well-wishers have taken initiatives to resolve the deadlock. I hope there will be some concrete outcome by tomorrow [Saturday],” Aryal said.

Ruling Nepal Communist Party (NCP) spokesperson Narayan Kaji Shrestha has personally taken an initiative to help find common ground. He has been holding informal talks with various persons including the four-member talks team formed on behalf of Dr KC, according to NCP leaders.

Dr KC, who was brought by the government to Kathmandu from Jumla through use of force Thursday, has said he will reject medical treatment until his demands are met. He has also announced that he is to continue his fast-unto-death to exert pressure on the government to introduce the medical education bill in its original form.

He has been kept on the third floor of the Ganesh Man Singh Memorial Building at TU Teaching Hospital and College. He has refused an ECG test despite his frail condition, according to doctors.

KATHMANDU, July 24: Talks between agitating Dr Govinda KC and the government has begun. It is taking place at the... Read More...

KATHMANDU, July 20: Talks between the side representing Dr Govinda KC and the government have become uncertain as the government... Read More...