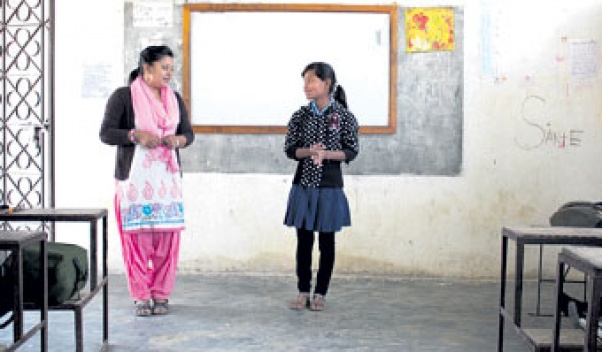 I wanted to show them how it’s done but never gave them the space and time to practice it themselves
I spent the first three months of my Teach for Nepal fellowship in classroom shouting my lungs out. I used to enter my classroom with this theory that if I spoke more in English, my students would be exposed to the language. They would hear more English words and would become clearer about their pronunciations and their uses. So I set the rule, “Do not speak when the teacher is speaking.” And since I’ve had an amazing group of students, they didn’t. Everything went according to the plan. Every day I talked and talked and my students listened and listened.

But I was forgetting a major part of the theory; my students were not getting enough chance to practice what they had learnt. They were just stocking up the knowledge in their brains thinking that they would never have to use the lessons again unless they were asked the same questions in their examinations. I still remember the moment this realization hit me. I had asked one of my outstanding students to present her learnings of the previous day in class. I had expected it to be very simple and very easy but she just stood there, unable to speak. I asked what the problem was and if she didn’t understand what she was asked to do. She told me, “No, miss. I understand this. I even know the answer.” “Then say it.” “I don’t know how to.”

I realized what I had been doing. I always tried to speak a lot. I wanted to show them how it’s done but never gave them the space and time to practice it themselves. I kept wasting my energy assuming they’d just pick up what I taught.
Result: Bewildered students and a sore throat for me.

Progress: Next to nothing.

So I changed my teaching style. I started talking less. I started giving my students chance to speak but I did not make speaking in English mandatory. They were confused for some time as they are not used to opportunities to share their views and ideas. It took some time and a lot of hard work from my side but they eventually grasped the concept.

They started talking more. I deliberately started asking them questions that were beyond the course but related to their everyday lives. I added questions based on ethics and morality, too. I was frequently surprised to hear their replies. I would never have guessed that a sixth grader would think of dowry as “evil” because he had twice said goodbye to his father who left for Qatar to make money for his sister’s wedding.

I found that being engaged in classes gave my students a voice. They felt like they were a part of something more than themselves. Helping their fellow classmates made them more confident. Students who used to fight everyday started helping each other to finish their projects. Students whose voice I had never heard in my first year of teaching have now become awesome group leaders. I still remember the light in a student’s eyes when his team chose him as the leader. He said that he had never done anything like it before and being in a position of a leader for the first time made him feel better about himself.

Student-led activities have turned my classroom into a more suitable space for learning. These days I give instructions just once and let the ones who have understood it explain it to their friends. This way, not only my students are learning more English but are also developing their self-confidence, team spirit, leadership and communication skills.

Ever since I got the students to move around the classroom, they have started feeling a sense of ownership of the place. Before, the students just used to sit silently on their benches and I had no opinion on that matter. I even looked at it as part of being “disciplined”. Then I remembered how I, as a student, used to sit in my classroom. I had to sit all day at the same spot and used to get bored out of my mind.

So I planned lessons that got them to leave their benches. I got them to move around the classroom every day. This went around for a month and then I could see the results. The students appeared to be more active and more willing to participate in activities. The classroom that used to be littered now seems to be a lot cleaner as the students have taken ownership of the space.

Changing my teaching style has not only helped me save my energy by talking less and moving less, but also brought the students closer to me. Now they see me as someone who listens to them, someone who is there not only to tell them what verbs and adjectives are but also as someone who is interested in them and their lives. As they have accepted me more, they are more attentive in class. The attendance records have improved. Seventh graders, whom I teach after lunch break, used to run away from school before my class even started. These days, however, instead of going home, or even during lunch hour, they’ve been spending their free time with me. They talk to me about anything and everything.

I know I’m not here forever. I have only a year left with my students. But when I leave the school, I hope I won’t have to worry about my kids. For that, I’m making sure that before I leave, they’ll be strong enough to be responsible for their own learning. I’m trying to get them to not be satisfied with just “satisfactory”. I plan my lessons so that my students understand and accept the concept of excellence in anything they do. And they’ve already started the journey.

California Jan 11: Mark Zuckerberg has pledged to devote 2018 to "fixing" Facebook. Now the Facebook CEO is kicking off... Read More...

In a new twist, EC trashes demand of NCP rival factions to recognize them as official NCP
3 hours ago

CBS announces 47,000 vacancies for enumerators and supervisors to conduct National Population and Housing Census 2021
21 hours ago

Govt under pressure to transfer funds from development projects to non-budgetary headings: Finance Ministry
4 hours ago

Australia OKs Pfizer vaccine, to begin in Feb.
3 hours ago