Takeaways from group stage of DPL 2 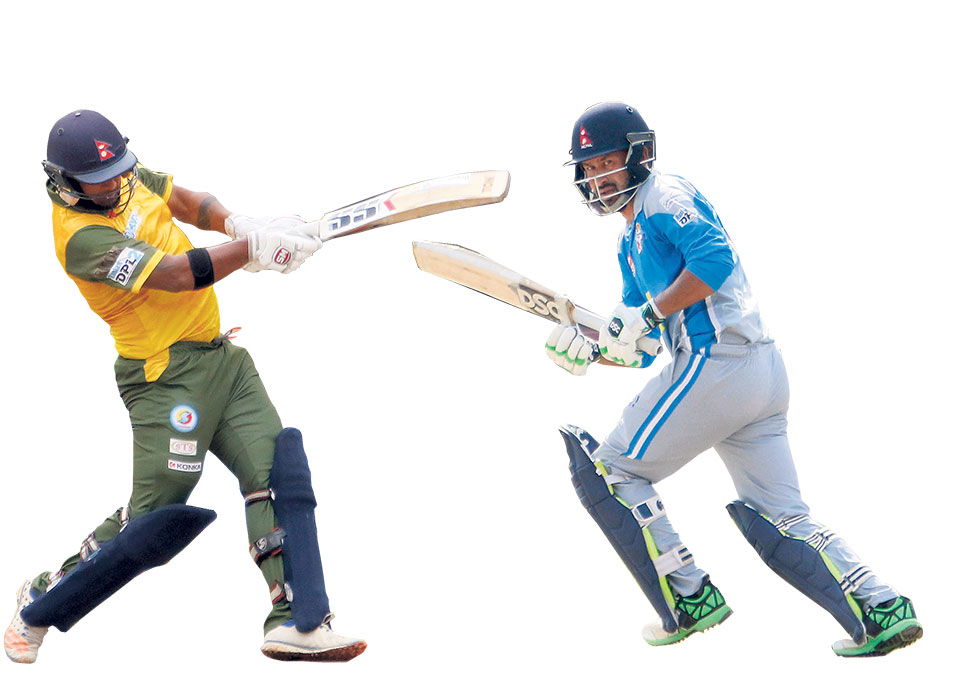 DHANGADHI, April 10: With the completion of the league phase, the top four teams -- Kathmandu Goldens, Team Chauraha Dhangadhi, Mahendranagar United and CYC Attariya -- have booked their places in the playoffs of the ongoing second Dhangadhi Premier League (DPL).

Here is a look at the takeaways from the group stage matches:

Kathmandu’s golden run
Kathmandu is duly on top of the league table and touted as the front runner for the DPL trophy for various reasons. Skipper Gyanendra Malla hit form just at the right time whereas the transformation in batting for Naresh Budhayer has been a commendable change. The ever in-form Amit Shrestha has made sure of another share of contribution in yet another domestic league. The two foreign recruit -- Delhi’s Suboth Bhati and Gujarat’s Sunny Patel -- have been in exceptional form, be it with ball or bat. Kathmandu has been the most successful team of the DPL season 2 and looks unbeatable at the moment after winning four of its five matches. Nothing taking away from the fact that the set of young bowlers have stepped up as well when required. Shahab Alam, the left arm spinner bagged a hat-trick when Team Chauraha was scoring freely in their first match. Similarly, Rashid Khan, the young right-arm pace bowler has been a revelation and find of the season so far with well-disguised change in pace and consistently pitching in those Yorker lengths. The most recent member of the national senior cricket team, Lalit Rajbanshi has been pretty effective as well.

Babar Hayat in a different league
The Hong Kong captain is not only the leading run-scorer this season, but has also scored 186 runs at the swashbuckling strike rate of 200. Among the players with at least 100 runs in the tournament, the next best striker of the ball with a rate of 145 is Malla, leading the unbeaten Kathmandu. Hayat also has the most sixes (17). His devastating first innings of the tournament against Mahendranagar where he took apart Karan KC was an expectation he lived up to throughout the season. The stature of Hayat continues to grow as much as the former CEO of Hong Kong Cricket Tim Cutler was worried if Pakistan might offer an opportunity to Pakistan-born skipper to represent Pakistan in limited over squads. Hayat’s franchise Biratnagar Kings missed on playoff places and without Hayat, the results could have been way worse.

The pace-bowling options
Chauraha’s Lalit Singh Bhandari has been traveling with Nepal national team for the last 12 months now, without featuring regularly in the playing XI. In fact, he failed to start any of the ICC WCQ and Division 2 matches. That however, has not stopped Lalit from growing from strength to strength in the current season DPL. With most wickets in the tournament alongside equally impressive Kathmandu pacer Rashid Khan, the second edition of cricket carnival in Dhangadhi has thrown up a couple of good prospects in fast bowling, a drawer which was almost headed towards emptiness. With Sompal Kami and Karan KC as the only pace bowlers tried for the national team in recent times, these two bowlers have shown tremendous temperament and character when asked to bowl in different circumstances, be it at start of the innings or the death overs in a tournament dominated by batsmen. Similarly, Attariya’s pace bowler Kamal Singh Airee has impressed in pitches too.

Sonu Tamang’s monster cameo
For so long, Chauraha’s SonuTamang has lived off the reputation of a power-hitter in Nepal’s domestic scene landing him in different premier tournaments without making any significant contribution. It all changed this time when he played an important cameo of 34 runs out of a total of 76 in a must-win final group match against the bottom-placed Rupandehi Challengers. He was brutal in front of the wickets against Sagar Pun’s off-spin scoring a hat-trick of sixes, the only such instant in the tournament. Arguably, he also played the shot of the tournament when he managed to play a well-intended upper-cut for six over the point area. His brutality with the bat is only next to Hayat in the tournament with a strike rate of 189. In a very short stay, Tamang proved the kind of reputation he lives with. Chauraha will need more of the same to make that extra mile to defend the title.

Binod Bhandari’s reboot
Mahendranagar won two of the first three matches to scrape through the playoffs being on the receiving end of two washed-out matches due to wet outfield caused by overnight rains. Their skipper Binod Bhandari has been the highest run-getter for them in three matches so far. Opening the batting for Mahendranagar, his strike rate of 115 is very unlike his batting reputation. His 61 runs against Rupandehi -- which eventually sealed their qualification to playoffs -- saw him fall as the sixth wicket of the innings at the end of the 18th over. The amount of patience he has displayed in recent matches was missing when he was dropped from the national team despite getting several opportunities. He accepted it in an after-match interview. “The time away from the senior team has helped me analyze my game. Now I put more value to my wicket. Playing with the straight bat and staying till the end of the innings is something I am trying to do in this tournament,” Bhandari said after playing a supporting role to Punit Bisht’s acrobatics at the other end in the win against Rupandehi.

Attariya’s jubilations
During the auctions, Biratnagar and Attariya were on the opposite side of the spectrum. Biratnagar went gung-ho for players they wanted, and with a bit of luck, they acquired them too. Players like Basant Regmi, Anil Kumar Sah, Dilip Nath, Prithu Baskota were and are a part of the national setup playing regular cricket. Similarly, the acquisition of Hayat and Shubham Kamat as overseas picks made them stronger on paper. On top of it all, the iconic Paras Khadka was leading them winning two back-to-back premier leagues at home last year or so and also getting the ODI status with the national team. The momentum favored Biratnagar.

Attariya was the least spending team from the auctions and Dipendra Singh Airee was their only current senior national team member. They acquired the services of experienced Subash Khakurel and made him captain. They recruited two unknown Indian talents Vipin Chandra and Gaurav Chitkara as well. Khakurel was the most experienced player of this team. Attariya, situated 13 kilometers from the SSP ground, had local support but the star-power on Kings’ side made them better placed for promotion in playoffs, in fact the trophy. After Chauraha won their final league match against Rupandehi, the final league match between Biratnagar and Attaraiya became a virtual knock out match. Both Attariya and Biratnagar had a match washed out. Attariya then lost Subash Khakurel too due to finger injury.

However, they won the reduced final league stage match of 6-over per side. The money-ball team from the far-western part of Nepal advanced as local supporters clapped and danced in jubilations in stands. DPL and Dhangadhi crowd will surely miss the quality of cricket and popularity that Khadka, Hayat and company could have brought in the playoffs. But this edition is a testimony to the fact that anything can happen in cricket, more so when overs keep getting reduced.

Stage set for DPL in Dhangadhi

KATHMANDU, March 30: The final preparation for the second edition of the Dhangadhi Premier League is almost over and the organizers... Read More...