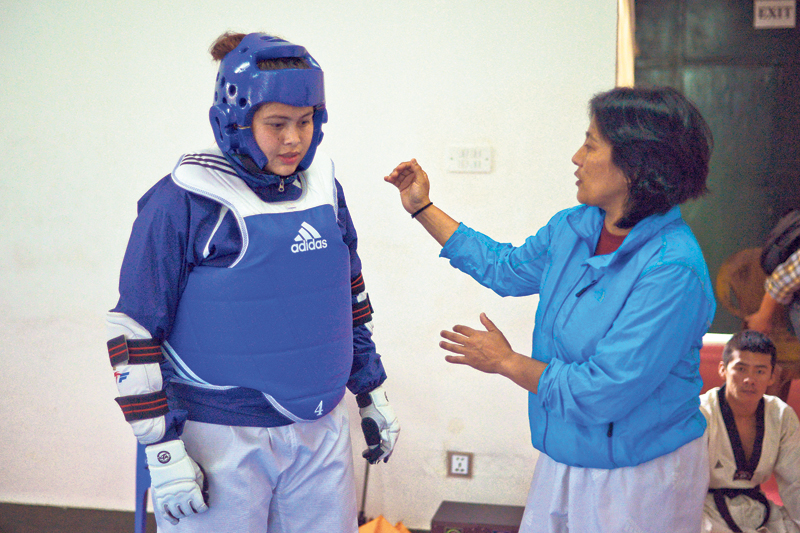 KATHMANDU, Aug 4: Taekwondo star Sangina Baidhya scripted her name in history books as the first Nepali player to qualify for the Olympics.

She secured a place in the 2004 Athens Olympics through qualifiers. She announced her retirement from the game in 2009.But she will be travelling to the Rio Olympics this time as well, but in a different role. She is flying to Rio as coach of lone representative of Nepali taekwondo, Nisha Rawal.

As far as the history of Nepali taekwondo in Olympics is concerned, Bidhan Lama had earned a bronze medal in the 1988 Seoul Olympics.

However, that medal was just from exhibition event as taekwondo wasn't included as the main event. Since then, only two Nepali players have progressed to the Olympics through qualifiers - Baidhya and Deepak Bista.

Looking at the past records, Olympics medal seems a far-fetched dream. So, Nepali taekwondo doesn't have high hopes from the Olympics and it has set its sight on winning at least a bout.

“My main target in Olympics is to win at least a bout which will help boost my confidence level,” said the 20-year-old Nisha, who is flying to Rio on August 12.

Nisha is taking part in the women's 67 kg plus weight category in Rio after earning Olympic wild card entry. The Tribhuvan Army Club player has been playing taekwondo since the age of 11 and had claimed gold in women's 73 kg plus event in the 6th National games held in Far-western Region beating strong opponent Radhika Shrestha of Nepal Police.

She has been dominating national tournaments lately but she knows Olympics is the toughest level of competition with best players from across the globe. And she is under pressure ahead of the global sports meet. “Yes I am feeling under pressure. I am the only taekwondo representative of my nation. Obviously, everyone wants me to perform well,” added Nisha.

However, she is aiming to play confidently and fearlessly. “My coach has shared her Olympics experience and told me to play confidently without any fear regardless of any opponent. It is the only way to meet my target,” said Nisha. So, she has set her eyes on winning at least a bout and playing fearlessly in Rio.

She underwent a month-long training in South Korea before training with Baidhya. But she doesn't think the training in Korea was much effective.

“I was taken to different universities for training during my stay in Korea, but that training wasn't much effective. I couldn't focus well as we had to travel much,” added Nisha.

“Despite the short training, I will try to play as per the suggestions and instructions of my coach and try to do my best to make the nation proud,” said Nisha, expressing her optimism.

Coach Baidhya expressed her concern over Nisha's height. “I am a bit worried about her height. It could be tough for Nisha if she is drawn with taller opponent.”

As there is just nine days left before flying to Brazil, coach Baidhya is working on the psychological part of her training rather than the physical aspect. “We are now at the last stage of training, so I am focusing on psychological part to boost up her confidence,” Baidhya shared.

She is also aware that Nisha is under pressure. “I am trying to ease her pressure by sharing my own Olympics experience,” said the coach.

Baidhya also admitted that the lack of investment and training facilities are the reasons why Nepali players don't get chance to prepare enough ahead of such major event like Olympics.

Most of the players in Olympics come with enough preparation and playing against them won't be easy for Nepali players, Baidhya said.

“When your nation doesn't make enough investment in infrastructures, training and the preparation, how would a player perform strongly in Olympics against the players coming from nations where they get enough training facilities,” she fumed. Baidhya also informed that she has suggested Nisha to use her right leg during the fight revealing that her left leg has not fully recovered from hamstring problem.

Blocking is the strongest part of Nisha's game, so Baidhya has worked to improve the player's weakest part, kicking, during the training.

She was also aware about Nisha's dissatisfaction over the lack of Olympics-focused training. “Now we are already in the last stage of the preparation. We can't change the situation, so now my expectation from her is confident display and fearless fight. Our target is to win at least a bout, and I hope we can achieve that,” said Baidhya.