TAC, MMC once again battling for title in Jhapa 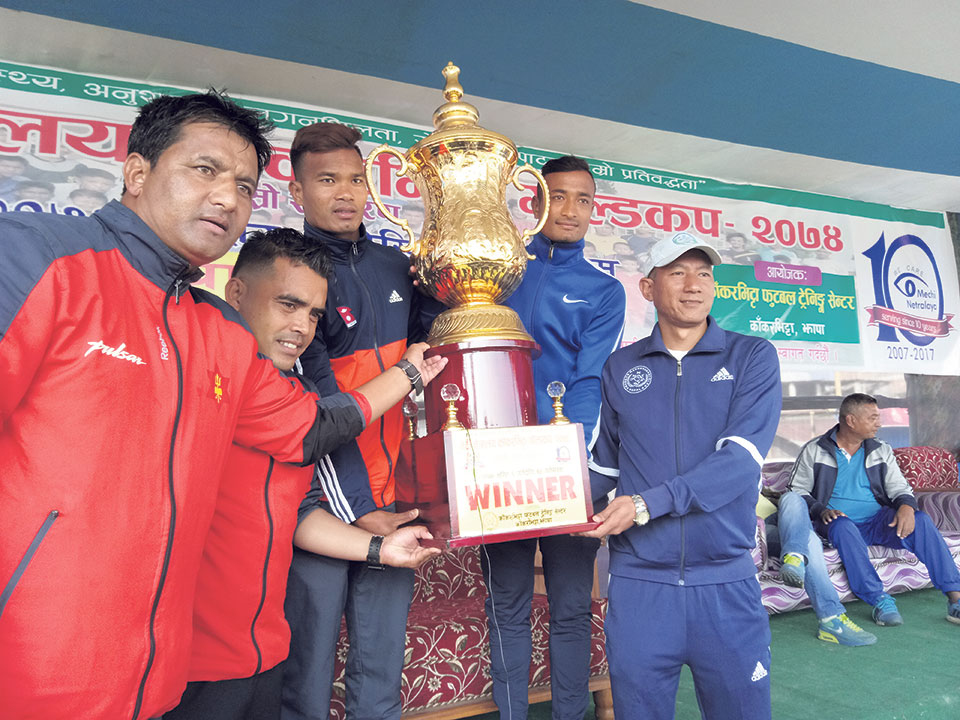 JHAPA, Dec 1: Tribhuvan Army Club (TAC) will have an opportunity to win the second title in Jhapa within a week when it faces Manang Marshyangdi Club (MMC) in the Mechi Netralaya Kakarbhitta Gold Cup Football Tournament summit clash on Friday.

Last week, departmental side TAC had overcame the same opponent, MMC, to win the Satakshi Gold Cup Football Tournament at Jhiljhile in Jhapa. In a competitive final clash, TAC had upset MMC 2-1 to bag a purse of Rs 500,000.

Former national player Nabin Neupane’s side TAC will be looking to upset MMC once again at Kakarbhitta School’s ground, to win the tournament that has the highest cash prize (Rs 800,000) among the competitions organized outside Kathmandu valley.

If TAC wins, it would be the third title of the year for the team that had won Bishal Memorial Gold Cup Football Tournament beating Sankata Club in Birgunj in April before clinching Satakshi Gold Cup.

Speaking at a pre-match conference on Thursday, the departmental team’s head coach Neupane said that his team was looking to make a hat-trick by winning the third trophy of the year, defeating heavyweight MMC in Kakarbhitta Gold Cup final.

“We are in good form, so we are looking for a hat-trick by wining this tournament. We have top quality strikers to produce goals and defenders to stop the opponents from scoring. So I am confident about adding the third trophy in a year,” said head coach Neupane.

On the other hand, MMC will be looking to redress a recent loss to TAC and win its second title of the year. MMC had lifted the title of Jaycees Cup beating Armed Police Force (APF) in Chitwan in September.

“We have an opportunity to even the score with MMC and we are fully ready to yield a positive result in order to win the second title of the year,” said Biraj Maharjan who is captaining the side in absence of Anil Gurung. “We have a balanced team with top talents, so we are good enough to win the final.”

However, MMC has been failing to produce wins within the regulation time throughout the tournament. MMC that was given direct entry into the quarterfinals was forced to wait until the sudden-death for its victories in the last two matches.

In the sudden-death of the last eight and four clashes, MMC beat Rupandehi XI and host Kakarbhitta Training Center with the score-lines of 7-6 and 8-7 respectively.

On the other hand, TAC has been performing well as it beat departmental rival Nepal Police Club (NPC) 3-0 in the semifinal. Earlier in the quarterfinal, TAC overcame Far-western XI 3-0 on penalties.

The army side is studded with three strikers of the national team including skipper Bharat Khawash, Nawayug Shrestha, and George Prince Karki. Since Shrestha is struggling to gain full fitness, U-19 striker Dinesh Henjen is ready to fill the void of senior striker in the final.

“Until now young Dinesh is doing well, so he is really good back-up plan for us if Nawayug will not be available in the summit clash,” said skipper Bharat Khawash in the pre-match conference.
National team goalie Bikesh Kuthu and defender Jitendra Karki are also taken as key players of the team.

MMC is also studded with national team members including Maharjan, Ananta Tamang, Sujal Shrestha and Bikram Lama who are failing to play on their par.

“We have been failing to win games in the regulation time despite having domestic stars in the team. But hopefully we will justify the team’s stardom in the final,” said MMC’s head coach Bijay Ghale who will miss the service of Sujal Shrestha in the final. National team winger Shrestha was shown red card in the semifinal so he will be unavailable in the summit clash.